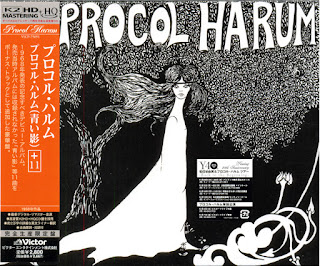 You might make the mistake of thinking 'A Whiter Shade Of Pale' is the only good song on the album, just because it's that notorious. Don't. Contrary to rumour, the album isn't packed with filler at all - even if they did have to rush to the studio and record it as quickly as possible on the heels of their sudden success. Of course, the song is outstanding: the way they intertwine Bach's 'Air On A G String' with blues patterns and Reid's mystical lyrics is simply incredible. Perhaps the tune doesn't sound as terrific now as it did way back in the summer of 1967 - after all, it was probably the first major venture into the world of art rock. But I still hold a soft spot in my heart for it as one of the best representatives of the magnificent sound of Procol Harum. The only thing it lacks is a guitar - Robin Trower hadn't yet joined at this point; but even without the guitar it still manages to convey that feeling of measured majesty which makes Procol captivating.

Yeah, but this is not the only high point. They might have recorded individual songs of higher quality in the future, but it's on here that they really burst out with an innovative, totally groundbreaking set of numbers. I'm perfectly aware that most of them are built on the same musical principle - that is, combining classical elements, primarily Bach, with slow, moody Ray Charles-ish soul and Brooker's high, unrestrained vocals; but that doesn't make the music less fascinating, because they didn't forget to provide most of their material with clever, catchy hooks. Not to mention the lyrics - some of the best rock poetry on here, no doubt.

You wanna some proof? Okay, here we go. 'Conquistador' might be the second best song on here, based on Reid's brilliant allegory of the vanity of victory. And, as much as I'm not a fan of the Brooker tone, I must confess that he pulls off the song just fine, clearly getting Reid's message. The best moment, of course, comes in the chorus, with the scary descending guitar riff over the confused lines 'And though I hoped for something to find/I could see no maze to unwind'! BOO! Sounds almost like 'Boris The Spider' to me, only the dark humour vibe is replaced by the really frightening one.

Yet another spooky tune is 'Outside The Gates Of Cerdes' (what's Cerdes, may I ask, and what's its relations with Hades?) Ever seen a painting of the Final Judgement by Bosch? That's what the lyrics seem to be all about, and the keyboards and the dark bass line create a mood that's simply perfect. Finally, if you're not yet scared out of your pants, you get a gloomy account of Brooker always running into his own tombstone in 'Something Following Me'. Need I add that both songs are highlighted by Trower's vicious Hendrix-inspired solos and Fisher's beautiful organ?

There's also some romantic ballads on here - like the silly 'She Wandered Through The Garden Fence', or the groovy 'Salad Days (Are Here Again)', and a couple of songs might seem throwaways, like the repetitive 'Kaleidoscope' or the short good-time ditty 'Good Captain Clack'. But even then, they're still listenable, and you won't regret buying the album while listening to such monsters as their greatest Ray Charles rip-off ('A Christmas Camel', with maybe the funniest lyrics on the entire album), or the closing instrumental 'Repent Walpurgis' which sounds close to 'Shade Of Pale', yet is different. IMHO, it's one of the most gorgeous classical-style rock compositions ever, standing right there, together with Jethro Tull's 'Bouree'.

Funny how all the gorgeous classical-style rock compositions are based on Bach, isn't it? In fact, if I might allow myself a little digression, it's interesting that Bach seems to be the primary influence for all 'serious' bands, and not only art rock ones: even Jack Bruce admitted Bach's influence in his work. I still have no idea why. Sure, Bach is a great composer, but there are so many more... why does nobody ever quote Mozart as an influence? Too lightweight? Too bad, I say!

All right, I was talking about 'Repent Walpurgis'. It's a great instrumental, with the pounding organ and Trower's guitar building up to shattering climaxes. Hell, I caught myself on using as many 'greatest', 'shattering' and 'gorgeous' epithets in this here review as I'd probably never use on a whole page devoted to lots of other bands. Well, you gotta excuse me: this record is truly like nothing else (except for later Procol Harum records, of course). I'd bet its primary uniqueness of course, lies in a definite differentiation between the piano (courtesy of Brooker) and the organ (courtesy of Fisher).

This results in a very rich layer of keyboard sound which neither Yes nor ELP, the two greatest keyboard prog rock bands of all time, could afford. Another distinction is that it manages to sound intelligent and serious without sounding at all pretentious - courtesy of Keith Reid and the goaty singing of Mr Brooker. And even if you think that it's pretentious, just listen to the ridiculous fun on 'Mabel', the track that should really and truly belong to a drunken cabaret party... nah. It's as great as everything else on here.

Oh! And don't forget the bonus tracks! The B-side of 'Shade Of Pale' is actually a jumpy R'n'B number ('Lime Street Blues') that denotes their Paramounts past. Then there's 'Homburg', their classic second single which is a carbon, but certainly not a dull, copy of 'Shade Of Pale', except that the piano is featured more prominently than the organ, giving the song a complaintive rather than majestic feel.

'Monseigneur Armand' is a throwaway, but 'Seem To Have The Blues All Of The Time' is top-notch, built on a grumbling, almost heavy metal riff (I wonder how much innovatory the song was for its time? There were no Led Zeppelin back then, remember that!) In all, the record is wonderful, wonderful, wonderful... geez, I'm gonna go put it on one more time now. Go get it.
by George Starostin 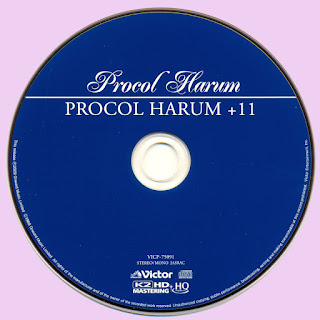 On "A Whiter Shade of Pale" only:
* Ray Royer (in place of Trower) – Guitar
* Bill Eyden (in place of Wilson) – Drums