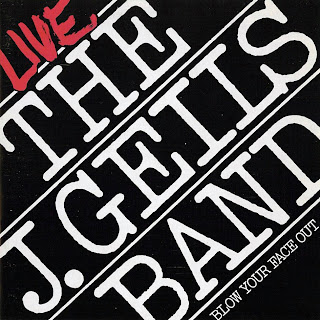 Double-album live sets came into vogue in 1976 after Peter Frampton's sales went through the roof for A&M, Bob Seger found fame with Live Bullet on Capitol, and the J. Geils Band released its second in-concert document in four years, Blow Your Face Out. There is great power in these grooves recorded over two nights, November 15 and November 19, at the now deconstructed Boston Garden and in Detroit at Cobo Hall.

Here's the beautiful dilemma with the Geils band: Live: Full House, recorded in Detroit in April of 1972, contains five songs that became J. Geils standards, and none of them overlap on the 1982 EMI single live disc, Showtime, chock-full of their latter-day classics. Can you believe there is absolutely no overlap from the first or third live album on this double disc, which came in between (except for "Looking for a Love," uncredited, which they slip into the intro of "Houseparty" on side two)? The Rhino CD contains Jeff Tamarkin's liner notes, while the original Atlantic album has an exquisite gatefold chock-full of photos, and inner sleeves with priceless band memo stuff à la Grand Funk's Live Album.

Sides one and two are great, and three and four are even better. "Detroit Breakdown" rocks and grooves, with tons of audience applause...Wolfy and the polished authority of his monologues are in command as the band oozes into "Chimes" from 1973's Ladies Invited. About three and a half minutes longer than the five-minute original, it is one of many highlights on this revealing pair of discs. A precursor to 1977's title track, "Monkey Island," "Chimes" gives this enigmatic band a chance to jam out slowly and lovingly over its groove.

There is so much to this album: the Janis Joplin standard "Raise Your Hand" written by Eddie Floyd, Albert Collins' "Sno-Cone" from their first album, and "Truck Drivin' Man" beating Bachman-Turner Overdrive to the punch. B.B. King producer Bill Szymczyk does a masterful job bringing it all together, and the band photos on back look...roguish. "Must of Got Lost," "Where Did Our Love Go," and "Give It to Me" are here in all their glory, a different glory than the studio versions, on an album that should have done for Geils what Live Bullet and Frampton Comes Alive did for their respective artists.

If only a legitimate release of their 1999 tour would be issued to stand next to this monster -- during that tour they combined the best elements of all three of their previous live discs. The J. Geils Band is more important and influential than the boys have been given credit for. It will be the live documents that ensure they eventually get their due, and Blow Your Face Out is a very worthy component that can still frazzle speakers.
by Joe Viglione 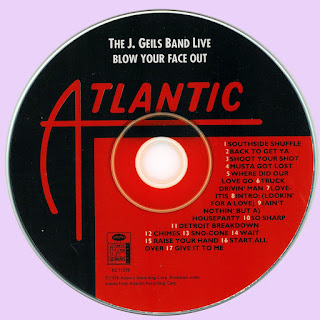