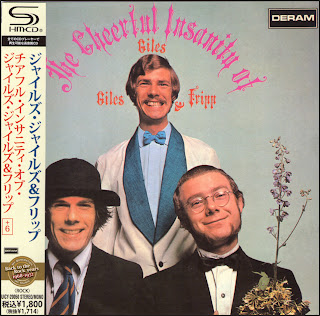 This pre-King Crimson aggregate involves the talents of Michael Giles (drums/vocals), Peter Giles (bass/vocals), and Robert Fripp (guitar/vocals) accompanied by a plethora of studio musicians -- most notably keyboardist Nicky Hopkins and backing vocalists the Breakaways. By any standards The Cheerful Insanity of Giles, Giles & Fripp is one of the more eclectic albums to have been issued during the psychedelic rock movement of the late '60s.

The album was initially issued in September of 1968 on the Decca Records subsidiary Deram -- whose releases were aimed specifically at the alternative or progressive rock market. That said, this disc is a far cry from the type of material that other artists on the label such as the Moody Blues, Caravan, or Pacific Drift were concurrently issuing.

The original record album was divided into two sections: "The Saga of Rodney Toady" and "Just George," which were named after the respective spoken word pieces that link the musical works on the A- and B-sides. Musically, Giles, Giles & Fripp are wholly unlike anything before or since. Drawing upon folk, classical, pop, and even sacred music, each track brings a fresh listening experience. Among the highlights is the leadoff track, "North Meadow," which features some stunning fretwork from Fripp. Likewise, "Call Tomorrow" is a trippy noir tale involving an ambiguous practical joke.

The classically influenced instrumental "Suite No. 1," as well as another one of Fripp's more esoteric compositions, "Erudite Eyes," likewise bear some semblance of sounds to come from the trio. While not everyone's cup of tea, there is a tremendous amount to enjoy on The Cheerful Insanity of Giles, Giles & Fripp for those whose expectations are not of King Crimson, but rather of lighthearted and decidedly folksy English tales.

Parties interested in this disc should likewise be advised of The Brondesbury Tapes, which is a collection of semiprofessional demos made by this trio and original Fairport Convention vocalist Judy Dyble (vocals) and soon-to-be King Crimson member Ian McDonald (flute/sax).
by Lindsay Planer 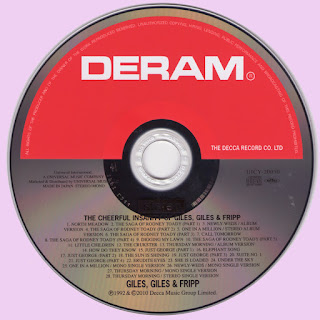