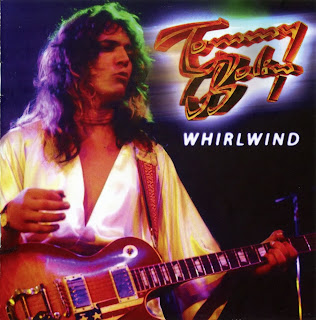 The life and music of guitar legend Tommy Bolin seemed to have crashed and burned all too quickly. Prior to his drug related death in 1976, Bolin was starting to formulate solo album number three, after semi-successful stints in both The James Gang and D. Purple that saw his stock as a guitar hero in waiting rise before quickly getting snuffed out after years of heroin addiction.

Since Bolin's death there has been a wealth of live and studio recordings to come out on the market that further prove the talents of this guitar genius. Whirlwind is the latest, a 2CD set from the folks at the Tommy Bolin Archives along with Cleopatra Records/Purple Pyramid, which contains not only some songs that were meant for that third solo record, but also rare material from Bolin's jazz-fusion band Energy as well as alternate & instrumental versions of other songs from his earlier solo albums. For fans, this is a set not to be missed.

The scorching "Cucumber Jam" from 1975 kicks things off, a sizzling number with Bolin's searing licks and solos, followed by the hard rocking "Heartlight", a tune recorded with the Energy line-up of Bolin, vocalist Jeff Cook, drummer Bobby Berge, bassist Stan Sheldon, and keyboard player Tom Stephenson. This band formed out of the ashes of Zephyr, and after you hear this tune, you'll wonder why this group didn't stick together and become huge. An excellent song, with catchy melodies and superb instrumentation, hard rock but with a jazz-fusion feel. "Hoka-Hay" is also from those same sessions, a scorching instrumental with fiery guitar & keyboard interplay that will easily appeal to all Return to Forever, Mahavishnu Orchestra, and Tony Williams Lifetime fans.

Tommy alone with his acoustic guitar is featured on "Don't Worry 'Bout Cash", and "San Francisco River" is a sizzling instrumental from 1975 that also features Berge & Sheldon, but it's Bolin's heavy riffs and amazing lead technique that steals the show. Another Energy tune that could have easily been a hit is "Rock-A-Bye", a Bob Seger styled rocker with great vocals from Cook and Stephenson's honky tonk piano lines.

"Dungeon" is an instrumental track that was planned for the third solo record, and it's another stellar hard rock/fusion piece with killer lead guitar work that shows just how savage Bolin could get when he wanted to. From a 1973 session comes "Alexis", a moody blues/pop rocker that was recorded just after the Billy Cobham Spectrum album and immediately prior to the guitarist joining the James Gang. In fact, most will remember that this tune actually made it to the James Gang Bang album, but it's here in its infancy, a tad more atmospheric but no less as powerful, complete with the hard rocking finale and Bolin's effects laden guitar work. "Gotta Dance" is a little tight jam that was being worked on for the third solo album in early 1976; there are some good ideas here on this funky rocker but you can tell it's mostly unfinished. "Spanish Lover" is another 1973 recording that also eventually made it to a James Gang album, the 1974 release Miami. CD 1 ends with the blistering "Sooner or Later", a melodic hard rocker that was being worked on just prior to his death, and finished up posthumously with Max Carl & Mike Finnegan trading off on lead vocals. Bolin's phased out, soul searching lead guitar work on this track is just sensational.

Over on CD2 you get an early instrumental version of "Red Skies", another tune that eventually wound up on Miami over a year later. Tommy's skills as a lead guitarist are in full force on this heavy yet atmospheric rocker, and "Way It's Always Been" is an early 1972 recording featuring Bolin on acoustic guitar & vocals doing a sort of Bob Dylan styled folk tune. Another song that eventually made it to Miami is "Sleepwalker", here once again in instrumental demo format.

The monstrous 26-minute "Marching Bag" is performed by Bolin with other members of Energy, and this tune eventually morphed into "Marching Powder" for the Teaser solo album. To say it's a fusion lovers dream is a complete understatement, so look for all sorts of incredible jams and sizzling guitar work here on this epic. Another Teaser track, "Wild Dogs", shows up here in lovely acoustic format, and the blistering funk rocker "From Another Time" from 1973 was also recorded just prior to him joining the James Gang, and sees Max Carl delivering some powerful vocals alongside Bolin's snappy licks & riffs and groove laden rhythms courtesy of Berge and Sheldon. A real workout of a tune, and not all that different from the music Bolin would help create in his short time with Deep Purple a few years later.

The whole set comes housed in a nice looking digipack, with a booklet containing full track information, photos, and an essay from Cook who talks about the sessions and the legend that is Tommy Bolin. My only gripe is that there are plenty of mistakes on the track information, such as songs where there are vocals and no vocal listed, songs where you hear keyboards and no keyboard player listed, and some typos, but otherwise this is a must have set for any serious Tommy Bolin fan. The sound quality on most of these tracks are pretty decent, a few sounding close to a good bootleg, but the musicianship throughout is stellar as you would expect. Simply a mandatory purchase for any Bolin aficionado.
by Pete Pardo 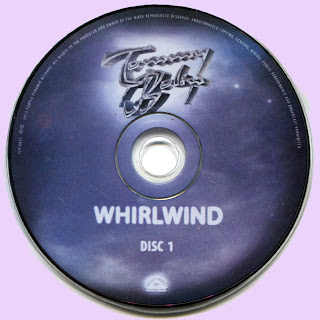 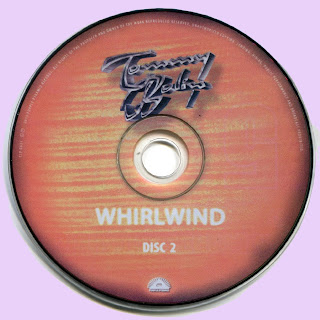