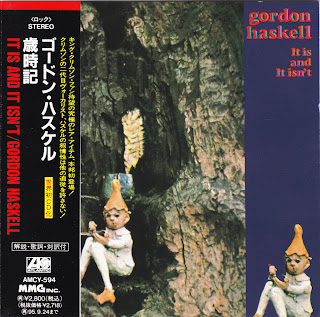 From Gordon Haskell's official page, about his latest album release.
Dear Friends,
I live quietly and freely, but industriously on a beautiful Greek island. I had no intention of writing or recording. I had had 60 years of life under English rule and had always found it too oppressive for my tastes.

In 2006 I finally gave up on England as a lost cause. Besides, the cost of living was beyond me and my taxes were going to finance wars. It was hardly encouraging. I shriveled up, starved of light. The vineyard was destroyed. Any good gardener knows the remedy for that.

My father, Professor Harry Hionides, was a Greek-American and whilst I never knew him, I had his Greek blood and humanitarian ways. After 60 years of mental imprisonment and frustration, and never-ending arguments, I am finally free.

When I first arrived on the island I began learning how to build my own house and with enormous help from my inspirational partner and soulmate we began to grow our own vegetables and fruit. Together we built a new and rewarding beautiful way of life.

Being able to provide shelter and food for oneself seems so obvious yet most of us leave the education system without the basic tools of survival. Most of us become dependent on somebody as a result. Our natural abilities and talents are too often overshadowed by our ambitions, put there by the good intentioned but misguided.

We begin our lives trying to please, trying to make someone proud of us. We can become successful, even President . Along the way we are obliged to make certain compromises to achieve those goals. George Bush is the perfect example of how any idiot can achieve his goal if you don’t mind the company you’re forced to keep and are willing to follow orders.

The song ‘How wonderful you are’ encapsulated the potential in each and every one of us . I had hoped the song would awaken those who felt oppressed by our idiotic authorities and we would start objecting and fighting back, but never mind. It’s a bit late now. Wars cost billions. Who did you think would pay for them? The Banks?

I had repeatedly rejected success over 40 years of ‘show business’ whether it was King Crimson or my own solo efforts simply because it felt phoney. Which in the main it was. My instincts never let me down. I had been right all along. I was simply outnumbered. Here on this island I find agreement and like minds. I have moved on. The new album “One day Soon” is here and I feel very good about it. There’s nothing more to say. Except that the fruit and vegetables never tasted so good as they do now.

I wish you all a good harvest on this amazing and beautiful planet. As I used to say in my previous life back in The Bent Brief and The Thomas Tripp, ‘May you be blessed with many goats!’ I remember you all with enormous love and admiration. Jazz was conversation. I’ll never forget listening to the jazz in Harry’s Bar. It was my education.
Thank you. Gordon Haskell Hionides

Gordon Haskell is usually thought of as a footnote in the history of King Crimson -- the only lead singer in the group's long list of personnel who never played a single live date with the band, though he was with them long enough to cut most of an album (Lizard) and get one performance ("Cadence and Cascade") onto its predecessor. Otherwise, he's been an enigma even to many Crimson fans.

Haskell's history with Robert Fripp goes back to the days they spent together in the mid-'60s as members of the League of Gentlemen, a band that backed various American R&B stars on tour and cut a couple of singles. Haskell was also a member of a Liverpool band called the Quotations, formed by ex-Big Three bassist Johnny Gustafson (before he joined the Merseybeats), who recorded for English Decca ("Alright Baby" b/w "Love You All Over Again") in 1964. His main group affiliation for most of the mid-'60s was the Fleur de Lys, a somewhat lightweight psychedelic band who recorded at least once under the pseudonym of Shyster. Haskell passed through the lineups of Rupert's People and Cupid's Inspiration, and, as a member of the Fleur de Lys, also played on records by Bill Kimber, John Bromley, Sharon Tandy, and Terry Durham. By the end of the '60s, he was a solo act, trying to establish himself as a singer/songwriter, and released a pair of singles in 1969 and 1970, "Boat Trip" and "Oh-La-Di-Doo-Da-Day," and one LP, Sail in My Boat, all for British CBS.

In 1970, as his former League of Gentlemen bandmate Robert Fripp was struggling to keep his current group, King Crimson, viable in some form and complete a second album, Haskell joined the band as successor to bassist-singer Greg Lake, who was leaving the lineup to join Emerson, Lake & Palmer. After singing on one song for that album, In the Wake of Poseidon, he joined a new Crimson lineup and recorded most of the next album, Lizard. As was often the case with Crimson lineups in those days, however, Haskell didn't last -- he and other members of the core band had left by the time Lizard was completed and released late in 1970, and he never worked live with the band.

Haskell cut a solo album, It Is and It Isn't, during 1973 (actually the album was recorded circa 1971 but saw the limelight round 1973-74), and worked with such artists as Tim Hardin, Alvin Lee, and Van Morrison. His solo work tends to be in a folk-like, singer/songwriter vein, reminiscent of Gordon Lightfoot with something of a progressive rock edge and more humor, some of it very sardonic. Based in southern England at the end of the '90s, he concertizes regularly in the Hampshire and Dorset areas, and he has continued his recording career into the '90s with his albums Butterfly in China and Hambledon Hill. In 1993, he also teamed up with Mike Wedgewood (ex-Curved Air and Caravan) to tour Scandinavia. In the late '90s, Voiceprint Records' Blueprint label reissued Haskell's solo albums of the '60s and '70s on compact disc. The massively popular "How Beautiful You Are" hit British airwaves in the winter of 2001, announcing Haskell's comeback to music. Harry's Bar followed the next year, fully bringing him back into the public spotlight after years of inactivity.
by Bruce Eder 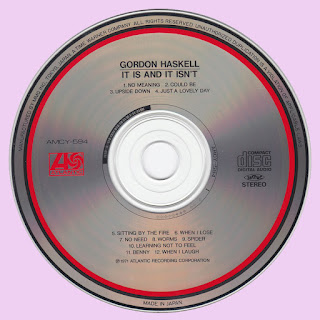