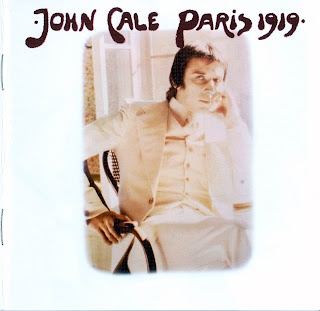 John Cale's 1973 album Paris 1919 has long been justly celebrated as the most accessible and most purely beautiful record of his storied, multi-faceted career. And despite the album's abiding eccentricities-- the literary and historical allusions, posh orchestration, and abstruse lyricism-- it has often seemed to be Cale's most personal and revealing work as well, a deeply felt meditation on loss, dislocation, and introspective yearning. For this lavish new remastered edition, Rhino UK has unearthed 11 previously unreleased rehearsals and alternate takes, including one completed outtake, "Burned Out Affair", not included on the original album. This wealth of additional material nearly triples the running length of the original, and provides fascinating new insight into the deliberative construction of Cale's still-vibrant masterpiece.

By 1973, of course, Cale had already assembled a resume that would assure his status in the avant-rock pantheon. He'd worked in the Dream Syndicate and Theatre of Eternal Music alongside La Monte Young and Tony Conrad; recorded an album with Terry Riley; produced albums for Nico and the Stooges; and-- most significantly-- had co-founded the Velvet Underground. Yet it must be noted that at this point Cale's musical legacy had not yet entirely caught up with him. His early work with Young and Conrad was (and largely remains) under-documented and clouded in shadow, while the Velvets-- and the Stooges, for that matter-- boasted a reverent cult following but had yet to earn their reputation as supremely influential proto-punk and underground rock icons.

Meanwhile, Cale's post-VU solo work had been largely met with critical and commercial indifference, which eventually lead to him parting ways with Columbia Records. His first album for his new label Reprise was The Academy in Peril, an underrated collection of avant-garde instrumentals that Warner Brothers ultimately decided to bill as their first classical release. Despite this marketing confusion, Cale's standing with Reprise remained solid-- at least if one is to trust Paris 1919's original liner notes, included here-- and he was able to author the new album with some degree of creative control. Just as importantly, and for perhaps the last time in his career, Cale was able to approach the ambitious project with a distinct freedom from audience expectation.

Many of the choices Cale made with the benefit of this freedom remain astonishing to this day. Most noteworthy was his curious decision to enlist the talents of guitarist Lowell George and drummer Richie Hayward, both members of the L.A.-based boogie-rock outfit Little Feat. Though it must have seemed an incongruous choice at the time, this small ensemble proved to be an inspired marriage of styles, as George contributes several lovely, expressive solos and Hayward underscores tracks like "Macbeth" with a cavernous post-Velvets stomp. Cale also employed the UCLA Symphony Orchestra to flesh out his sophisticated, piano-based compositions, and their dramatic arrangements furnish Paris 1919 with much of its stately, haunting grandeur.

Throughout the album, Cale populates his songs with geographic detail-- including not just Paris, but also Barbury, Andalucia, Dunkirk, etc.-- and cryptic characters like Old Taylor, Segovia, and Farmer John. As writer Matthew Specktor points out in his lively liner notes, these wry characterizations allow the album to take on the appearance of a Graham Greene novella, with Greene himself the subject of one of the album's strangest and most erudite tracks.

On this track, as elsewhere on Paris 1919, Cale's lyrics veritably drip with intrigue and thinly-masked violence ("It must all seem like second nature/ Chopping down the people where they stand") with the album's central narrative based very loosely upon the Versailles Conference in 1919 Paris. But many of these songs contain tantalizing autobiographical overtones as well, particularly on the opening "Child's Christmas in Wales", which blends its Dylan Thomas references with what might be memories from Cale's own childhood. And on the elegiac "Half Past France", it's left ambiguous whether the song's narrator is a battle-weary WWI soldier returning from the front, or simply an exhausted touring musician wondering where exactly on the map he is.

The shadow of Graham Greene returns on this set's one completed outtake, "A Burnt-Out Affair", a track whose name seems a mash-up of two Greene titles: A Burnt-Out Case and The End of the Affair. Despite Cale's rather ragged vocal delivery, this track seems perfectly of a piece with the bulk of Paris 1919, leaving one to wonder what structural concerns might've kept it off the original album. Many of the other bonus tracks included here appear to be unfinished sketches, including a striking rehearsal take of Cale's deathless ballad "Andalucia" which he sings in a muffled near-whisper, sounding as though not entirely sure of the lyrics.

But several of the bonus tracks seem nearer completion, and grant the listener an intriguing glimpse at what could be Paris 1919's alternate history. A hypnotic, viola-led "drone mix" of "Hanky Panky Nohow" draws a stronger link to Cale's earlier musical experiments than anything on the released version of the album, while a stripped-down rendition of "The Endless Planes of Fortune" better accentuates Cale's nuanced vocal and Lowell George's understated country-rock accents.

The album's title track appears in two additional versions-- a "string mix" that features only Cale and a small chamber ensemble, and a "piano mix" that includes a beautiful, overtly Brian Wilson-inspired vocal bridge. Each of these alternate tracks is revelatory in its own right, and when taken together with the completed album this collection offers a brilliant working portrait of an artist testing the full possibilities of his songcraft. For better or worse, Cale has never again made another record quite like Paris 1919, at least in part, one suspects, because so many in his audience have since longed for him to do so.
by Matthew Murphy 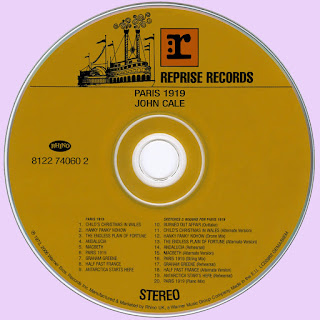