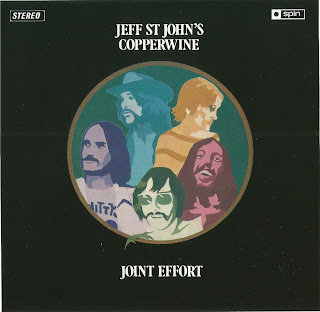 Copperwine (aka Jeff St John's Copperwine) was formed by Jeff St John's in early 1969.  The band's first gigs were some low-key dates in Perth, before returning to Sydney. Copperwine soon commanded a rabid following in that city's fast-developing 'head' scene. Around the time of the new band's formation, guitarist Ross East was also invited to join the revised Masters Apprentices line-up by Jim Keays, but he turned it down, opting to stay with Jeff.

Aided by East and Peter Figures, plus Alan Ingram on bass and keyboardist Barry Kelly (from Marty Rhone's Soul Agents), St John wowed punters at the Ourimbah "Pilgrimage For Pop", Australia's first major outdoor rock festival, held at Ourimbah, NSW at the end of January 1970. The band's dynamic repertoire mixed quality prog-flavoured group originals with powerful renditions of Sly & the Family Stone's funk classic "Sing A Simple Song" (a stage fave for many Australian acts of the time including Southern Comfort and The Affair), a storming version of The Temptations' psych-soul masterpiece "Cloud Nine" and Blind Faith's "Can't Find My Way Home."

This body of songs was captured by producer Pat Aulton in superb that remains one of the most accomplished and musically adventurous long players of the time. The punningly-titled Joint Effort won considerable critical acclaim, but failed to generate significant sales. A similar fate befell the great single lifted from the album, "Cloud Nine" / "Days To Come" (Feb. 1970). An EP, Sing A Simple Song, which featured four selections from its parent album, came out in May 1970.

In retrospect, Joint Effort reveals at least three truths -- the album was one of Festival Record's most consistent sellers for many years, it's a fine artefact of what was musically going on with OzRock in this heady and fertile time, and it documents what a fine band Copperwine was and provided conclusive proof that Jeff is one of the best rock vocalists this country has ever produced.

The musicianship of the band, particularly that of East and Kelly illustrated the embarrassment of riches scattered among Australian groups at this time. Original band-composed collaborations on the LP include the reflective "Fanciful Flights" (compiled on Raven's 2-CD compilation Golden Miles: Australian Progressive Rock, 1969-1974), the jazz-tinged instrumental "Any Orange Night" and the ensemble piece "You Don't Have To Listen". The towering opening track, a surging, organ-driven cover of The Temptation's "Cloud Nine", showed off Jeff's commanding soul stylings, superbly backed by a power-drive performance from Copperwine that, frankly, puts the original in the shade.

Another single, issued on Spin in November 1970, fared extremely well. The smoothly confident, organ-led cover of Rotary Connection's "Teach Me How To Fly" (featuring a berserk guitar solo from East, and some very tasty bass-drums interplay) propelled the band to #12 in Melbourne and a very encouraging #3 Sydney chart placement. St John's dazzling vocal performance on this record is probably the main reason why.

An 'insane” (as Jeff puts it) schedule of touring, concentrated in the eastern states, sustained Copperwine throughout 1970-71. Noted soul-blues singer Wendy Saddington (formerly of James Taylor Move and Chain) joined as co-lead vocalist in May 1970 and made her recording debut with the band (without St John though) on the intriguingly laid-back, bluesy album Wendy Saddington and Copperwine Live, recorded at the Wallacia Rock Festival in January 1971. By this time, too, former Amazons and Dave Miller Set member Harry Brus had replaced Alan Ingram on bass. T

he Copperwine/Saddington live album was scheduled for re-release on CD as part of Festival's reissue program, but the entire reissue project was scrapped after the acquisition of Mushroom Records. Festival's rapid financial decline after 2002 led to its closure in late 2005, and the entire Festival-Mushroom archive was sold to the American-owned Warner Music group soon after.

Although Saddington had departed Copperwine by February 1971, the group continued to tour relentlessly, with Jeff at the helm. Another major event for the band in 1971 was its participation in the Hoadley's Battle of the Soudns. The group, with St John in ultimate form, put on a commanding show, performing a stunning version of the Leon Russell-penned "Hummingbird", but they finished third behind Fraternity and Sherbet.

"Hummingbird" (backed by Derek & The Dominos' Keep On Growing) became the next Copperwine single, which was released in August on Festival's new progressive subsidiary, Infinity and it was a moderate chart success. Early in the year they recruited Glyn Mason (ex-Chain, Larry's Rebels) and this line-up performed at the Mulwala Festival near Albury in NSW in April 1972. Soon after, Jeff split from Copperwine, but the band continued on for some time, with Mason taking over as lead vocalist.
by Paul Culnane 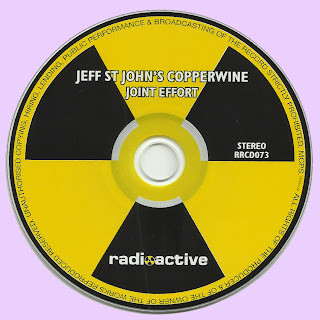