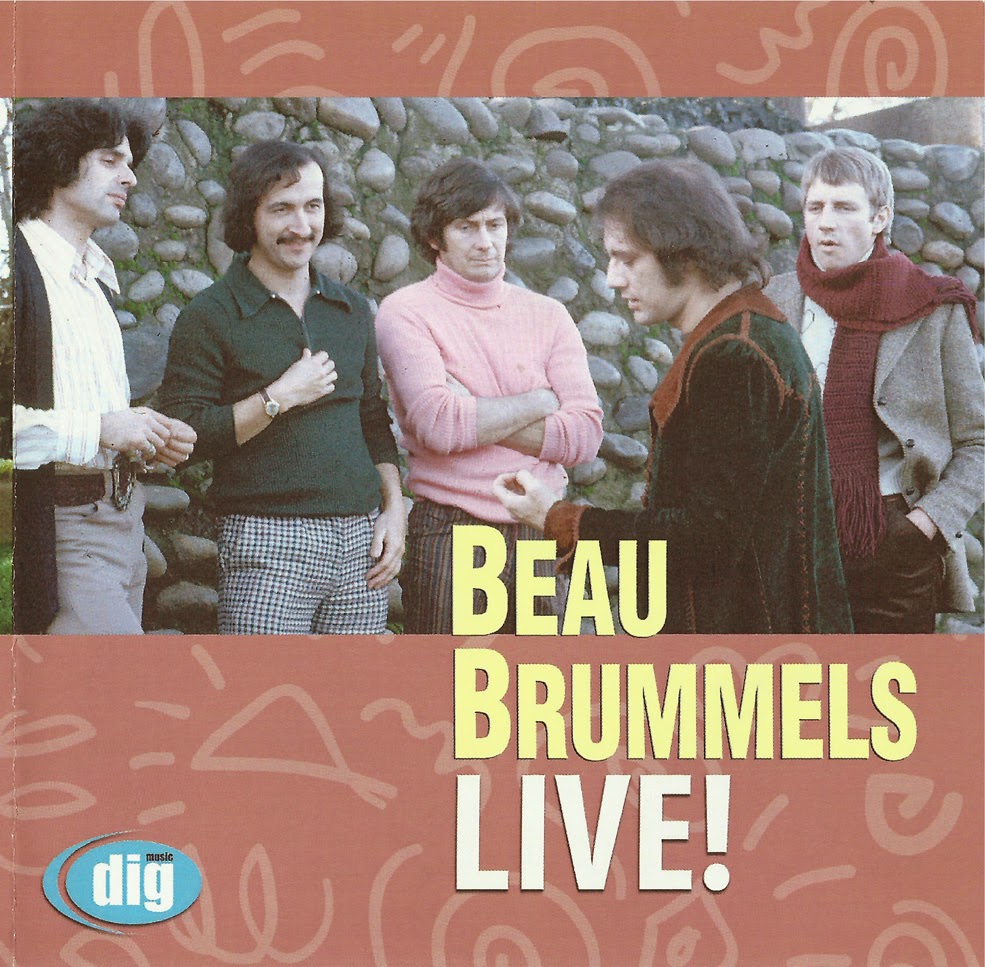 In 1965, American rock and roll music was swept up in the British Invasion. But, in Northern California, fans had there own "British" band. The Beau Brummels, like the Byrds and others, were a vital part of a new music explosion. All jangly guitars and tight harmonies, they had the sound. They also had the look. And, the name? Well, it sounded like a bunch of English dandies! The Beau Brummels took America by storm in 1965, leaping onto the charts with "Laugh Laugh", following in May with "Just A Little/ Still In Love With You Baby", and ending the summer with "You Tell Me Why". While the hits were breaking nationwide, the band's managers and record label owners, DJ's "Big Daddy" Tom Donahue and Bobby Mitchell, kept the group hidden in San Francisco area clubs until "the time was right for touring".

Finally let loose to play their first concert, the Beau Brummels were headliners at the Memorial Auditorium in nearby Sacramento. With Gary Lewis And The Playboys as support, they played in front of 4000 screaming fans! From 1965 through 1968, the Beau Brummels created a string of memorable Top-40 hits. They released a half-dozen albums, including one recognized classic, "Triangle" in 1967. The band are considered folk-rock pioneers and are credited with helping to introduce country-Rock with "Bradley's Barn" in 1968.  The Beau Brummels earned the respect and support of fans worldwide who remember something special when they hear the heartfelt soul in Sal Valentino's voice-the reverberation of Ron Elliott's and Dec Mulligan's guitars and Dec's wailing harmonica-all carried along by Ron Meagher's bass and John Peterson's drums. Ultimately, the band ceased to exist.

In 1974, Elliott sparked a reunion of the Beau Brummels. He showed up at Sal's house with new material, a record deal in the works, and a desire to recapture the magic. But, it had to be with all the original guys! Sal Valentino explained it this way to DIG records: "Ron Elliott had a bunch of songs that sounded like he had been a staff writer trying to write stuff that would fit different artists. Ron Meagher had a couple songs. Declan wrote a song or two. One thing decided early on by Elliott was that I was going to do (all) the singing...not like before.

The group came to Sacramento to woodshed, to work on the songs. They returned to the city that had always received them warmly. Before recording any new material, they would test the waters with a week-long engagement at the intimate Shire Road Pub in nearby Fair Oaks Village. The Beau Brummels would play music for old friends and for the curious over a four night stand, two shows each night. With Sal's opening acoustic set, and Stoneground lady Lydia Moreno's offering, the shows ran nearly 3 hours. Crowds were lined up around the block—the Beau Brummels were back! The band performed the chart hits with a fresh infusion of joy and celebration. But, there was something else. From the bossa nova beat of "City Girl", to the funk-driven "Man And Woman Kind" and the rocking "Lisa", new musical territory was being staked out.

1975 saw the Warner Brothers album "Beau Brummels" released to critical acclaim but poor sales. The band had not remained intact. Ron Meagher left before the LP was finished. Some live label-sponsored showcases were scheduled, but it just wasn't the same.

People have said that the magic that justified the reunion was left on that tiny stage in Fair Oaks. What survived was this recording. It's the only stage performance of the original Beau Brummels. And, the song list features 10 compositions that have never been released.

DIG records asked Sal Valentino to comment on some of the songs that Beau Brummels fans have not heard before. We share his thoughts and impressions with you: "Lonely People" ...That was a Ron Meagher song. "Music Speaks Louder Than Words" ...is a strange song. It was one of those songs Elliott wrote when he was some kind of staff writer.

"Lisa" ...is a Declan Mulligan song. It's got that kind of driving beat that Declan liked. With Elliott, everything we were doing was meticulous and plotted out. Whereas "Lisa" is just "let's get it on". We all seemed to like doing it. "Man And Woman Kind" ...We had fun doing this one because it's the kind of thing we (normally) wouldn't do.

"Her Dream Alley" ...A little country, a little jug band-ish. "City Girl" ...This song I love. I really do. It's about his (Elliott's) wife, I think. You have to remember, this is the kind of singer I am. Basically, this is what I could do. Almost folky. Maybe a little jazzy. You know, not quite. But, that FM kind of song. Sal also commented on two songs from the Warner Brothers album: "Singing Cowboy" ...was inspired by Gene Autry

"Tennessee Walker" ...When Elliott came to me and played this song, I couldn't believe it. I couldn't believe I knew someone who wrote this song. It made me think of Hoagy Carmichael and Johnny Mercer. I knew Elliott was capable of that. That was part of his musical background. When I met him, he was around 14 or 15 and he was writing musicals. It was impressive. Upon hearing Beau Brummels Live all the way through, DIG asked Sal what he thought: "That sounds pretty good!" Come, join us for a set at the Pub.
by Jeff Hughson, January, 1999 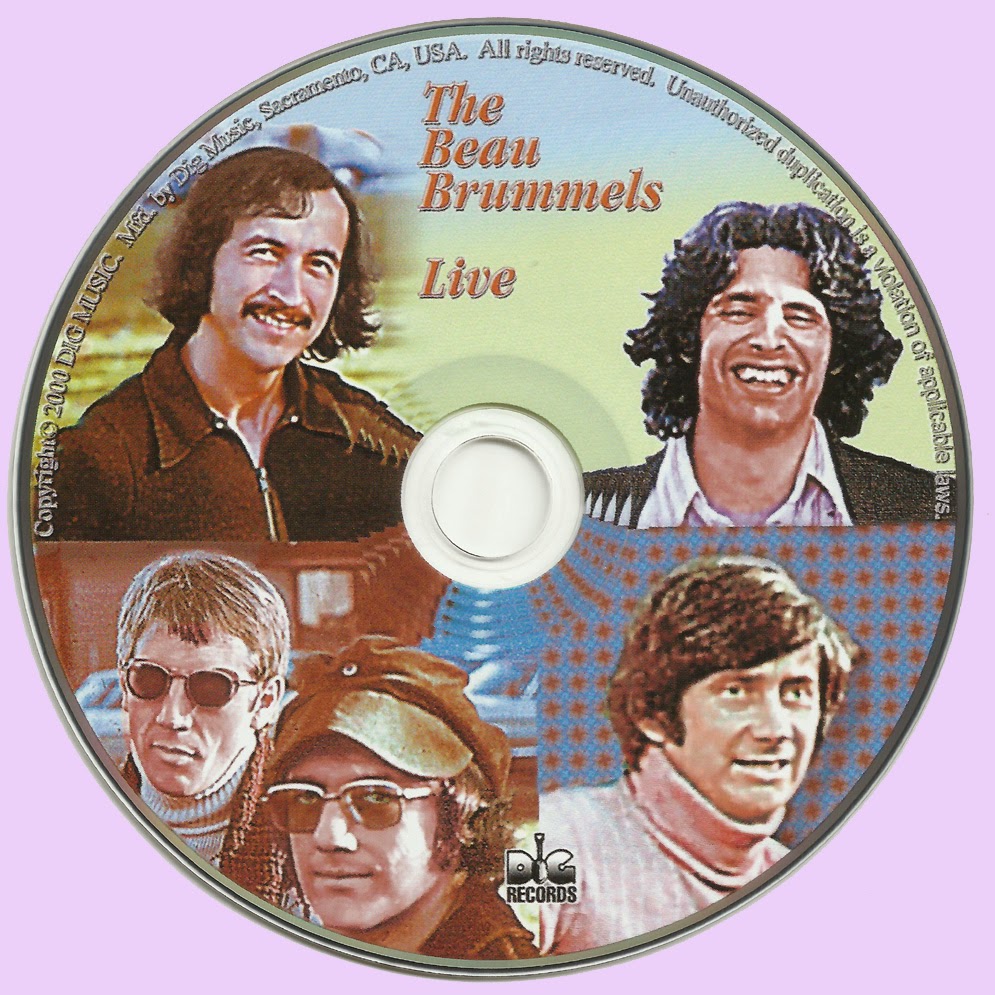 Free Text
the Free Text
Posted by Marios at 7:51 AM 7 comments: