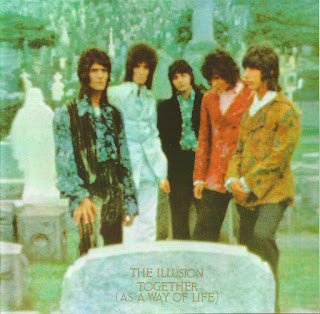 By some standards, the Illusion were one of the most successful unknown psychedelic bands of their generation -- unknown, yes, but with three LPs to their credit on the Steed label. Their personnel included Michael Ricciardella (drums), Richie Cerniglia (guitar), Chuck Alder (bass), Mike Maniscalco (guitar, keyboards), and John Vinci (vocals). The Steed label released Illusion, Together, and If It's So between 1969 and 1970.

Their second is a mixed bag – the psychedelic aspects have been toned down and the album has some heavy workouts which lend themselves to the "cock rock" excess of the 70s, but generally it's a lot more quieter than the other two albums.

The group, as a sign of the times, experiments with other musical forms trying to expand their palate, sometimes to mixed results. Lead track and first single "How Does It Feel" is a close cousin to "Did You See Her Eyes." A mover with funky cowbell, wah-wah accents and a sly nod to "Day Tripper" it made it to #110 on the charts." "Happy Days" is actually a dramatic mid-tempo number with choral vocals and prominent electric piano.

Throughout the album Maniscalco's keyboards and acoustic guitars are more to the fore. "Bright Eyes" alternates from jaunty to semi-classical with a piano coda, while "Don't Push It" is a riff rocker, with Hammond organ and a lengthy percussion finale, "Illusion-style." Written by Barry, "Once In A Lifetime" was the B-side of "How Does It Feel," it's slinky soul underpinned by acoustic guitar, with an excellent Vinci vocal and tasty guitar from Cerniglia.

With strong A and B sides, it deserved more than it's #110 chart showing. "Love Me Girl" is a good-time hand-clapper that sounds like a throwback to co-writter Barry's Brill Building days. As "Dame Tu Amor, Nina" it was released in Spain as the flip of "Juntos" ("Together") in a collectable picture sleeve. The real meat is on Side Two. "Lila" is a catchy stew of intertwined guitars, bass-driven rhythm and sing-along vocals that should have been released as a single. With it's throbbing Leslie organ and rubbery sustained fuzz guitar alternating with acoustic-based verses, "Angel" is psychedelic pop perfection. Going from strength to strength, "Peace Pipe" smokes from the dual fuzz lead opening to the last beat of thumping tribal drums.

What could have sounded like a bad cliche in the wrong hands becomes a tour de force with haunting Leslied vocal refrains, growling Hammond organ, and thrilling guitar pyrotechnics. I guess back then all bands felt obligated to take their shot at "da blooze," and while no great shakes, "Naked Blues" is at least not embarrassing. A beautiful haunting ballad, "Little Boy" with it's delicate finger-picked guitar and dramatic flourishes is another showcase for John Vinci's vocal prowess. Side closer "Together" is an ever catchier sing-along and was their second highest charting single at #80. The "peace & harmony" lyrics may be charmingly dated, but it's stabs of fuzz-kazoo guitar and rousing children's choir chorus should have sent it higher than #80. The Illusion had shown listeners again they truly had it "together"
by Bruce Eder and John H. McCarthy 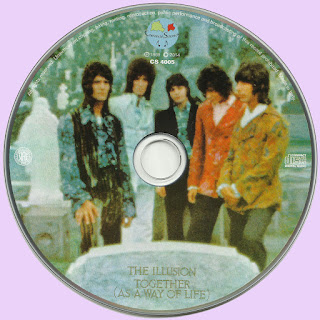 Free Text
Text Host
Posted by Marios at 8:02 AM 9 comments: