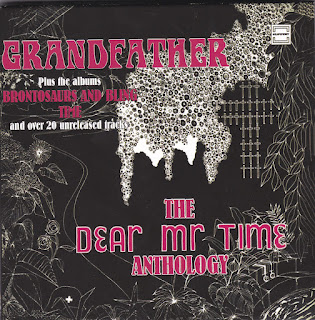 The initial album is called Grandfather, giving its name to the title of this collection. Released in February 1971, it’s actually a conceptual piece telling the story of a man’s life from birth to death. Now, this wasn’t an original idea even then (yes, sit down S F Sorrow by The Pretty Things, we know you’re there), but it is surprisingly well-executed, even now not appearing too dated. The influences are clear throughout: the album comes across as something of a cross between The Moody Blues and King Crimson’s first album. The former supplies the concise nature of the songwriting, and the way with an often simple but effective melody and easily understandable lyric, while the latter supplies the sometimes angular instrumentation, the sax and the sometimes quirky urgency.
The whole thing holds together pretty well still, with tracks like Make Your Peace and the double header Prelude / Your Country Needs You being particular highlights. It really is worth a listen, and not merely for the curious. Thirteen (!) bonus tracks are appended, being mostly acoustic demos recorded by guitarist Chris Baker, and they are a mixed bag as you would expect – though one or two of them, such as A Song Of Fairgrounds for example, really could have been made into something very good.
ow, we fast forward as a kind of montage through such trifles as the invention of video recorders, mobile phones, DVD, CD, satellite television, the entire life-cycle of Britain in the EU, and something called the internet, and reach the second album. Which is called Brontosaurs And Bling. On Hallowed Ground arrives, and all bets are off. It’s suddenly powerfully-played, edgy yet melodic prog with a real kick in its boots, and the band have almost visibly found their lost mojo. It’s so unexpected as to be utterly joyful. But here’s the thing: it gets even better. Well, not immediately, as It’s Only Love / Tomorrow Is Another Day threatens to derail things again immediately, but with track seven, Sitting In An English Garden, we get the best song on the first and second discs combined, with a brilliantly clever and wittily sardonic lyric referencing the 1960s via an English summer’s day, being perfectly matched by a delightfully upbeat psych-pop tune which simply entrances.
It’s the best song that XTC never wrote. Following this, Pigs In Outer Space, despite the odd title (the second pig reference, for some reason), almost repeats the trick with another slice of pure power-pop genius, borrowing a hint of Peter Frampton’s Baby I Love Your Way, and turning it into a much better song while they do so. At this point, the album has become really exciting.
Next up is the 2018 album, the unimaginatively titled Time, but against every single expectation we could possibly have, this turns out to be a dyed in the wool classic album. Taking the best facets of the highlights of the previous record, the band manage to turn out a razor-sharp, satirical and witty art-pop album which has the best qualities of XTC and 10cc / Godley & Creme written through it like a stick of rock. The difference from the previous album is astonishing, as if they have taken a trip to Robert Johnson’s crossroads in order to become the spiritual heirs to 10cc. From the opening ‘Lucy In The Sky With Diamonds homage’ of the darkly cynical Acid Rain through to the final deftly delivered eco-message of The Houses In Between, there is no weak song here among the thirteen tracks.
Today Is Such A Lovely Day is irresistible no matter how hard you try, Elephants Dump is hilariously clever while Never Done Godspell lists all of the low points and degrading indignities the protagonist has been forced to endure during his life and career, with the repeated caveat ‘but I’ve never done Godspell…’ Some of the stuff here is honestly like Zappa fronting the Kursaal Flyers, it’s that perfect a distillation of that slyly, sardonic art-pop that the previous album missed by the length of a football pitch. Best of all, and for me the standout song on the whole three disc set, is the hymn to rampant entitled consumerism and greed which is Gimme Jam. Interspersed with the constant urgent demands to ‘Gimme Jam’, we get brilliant lines such as ‘Gimme champagne and caviar for sophistication / Gimme real French coffee for my constipation’ and, best of all, ‘Gimme new Maseratis to a monthly quota / Gimme GaGa and Cheryl on a nightly rota – Gimme Jam!’- all this to a leg-pumping boogie accompaniment which just makes you want to put it straight back on when its finished.
The main thrust of the promotion here, and indeed almost all of the accompanying booklet, is based around the Grandfather album, which is understandable as it has its collectable and cult reputation – but despite the undeniable quality of that album, it is still outshone by the unheralded ‘underdog’ Time. Get this set. Enjoy Grandfather, be patient by Brontosaurs, but fall in love with Time. The latter is the most surprised by an album I’ve been in a very, very long … well … Time. Inspired stuff.
by Steve Pilkington, September 27, 2021 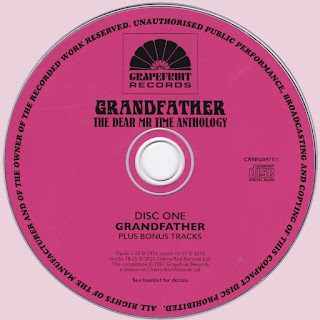 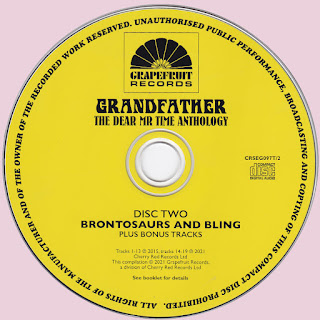 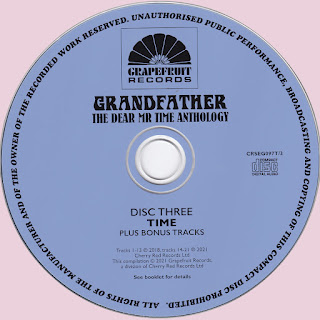