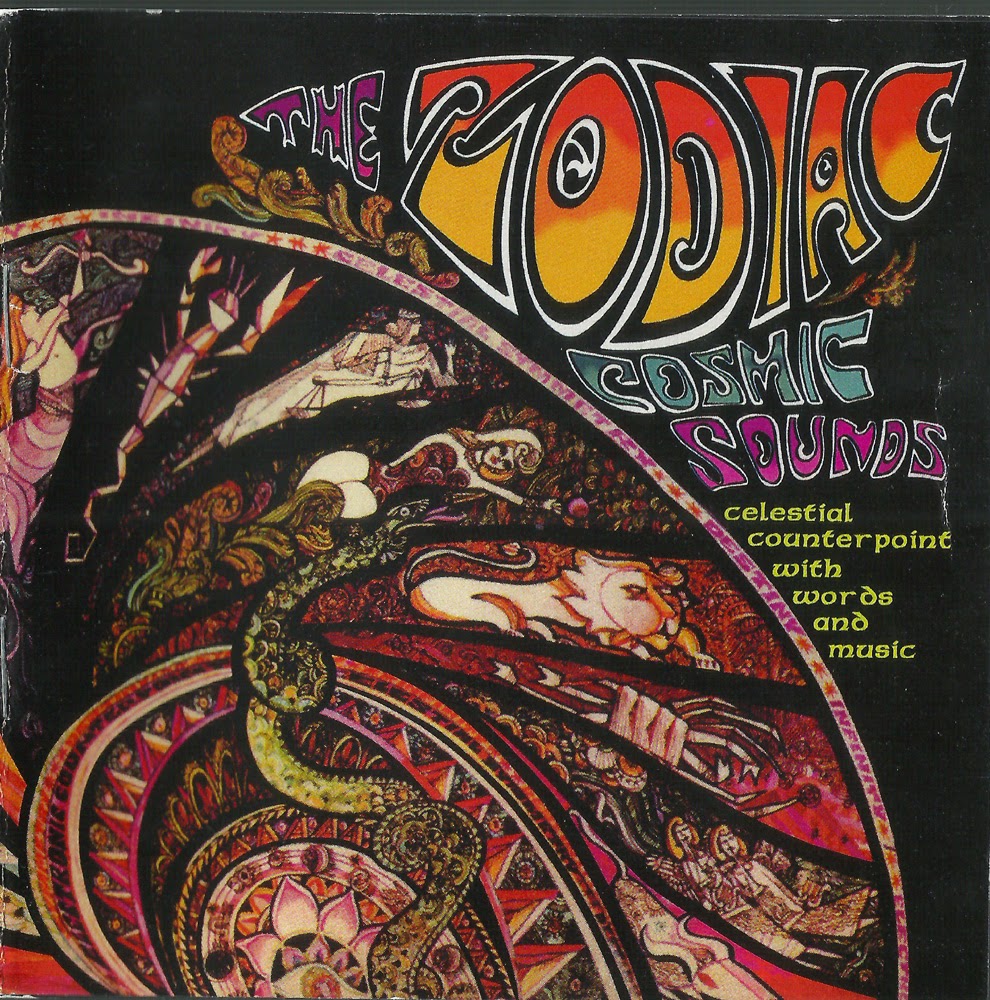 At first glance and hearing, The Zodiac: Cosmic Sounds might seem like an anomaly in the Elektra catalog. When it appeared in 1967, the label was recognized primarily for its eclectic catalog of folk recordings, and starting around 1965 for its run of extremely important folk-rock records by Love, Judy Collins, Tom Rush, Tim Buckley, and others.  Just a couple of catalog numbers in advance of the album was the debut by the Doors, which would advance Elektra to a whole new level.

The Zodiac: Cosmic Sounds, however, was like none of those records. It was not so much the product of a group or artist as it was a collectively-hatched concept album, matching psychedelic mood music with spoken prose and all manner of exotic and electronic instrumentation. It was, as the subtitle boasted, "celestial counterpoint with words and music." And as the back sleeve instructed, in capital purple letters, it "MUST BE PLAYED IN THE DARK." Should there have been any doubt that it was serious, the astrological sign of each contributor listed on the back sleeve was announced, in parentheses, after each name, even for Elektra owner Jac Holzman. Artist Abe Gurvin and art director William S. Harvey concocted a suitably florid sleeve, with a mosaic of colors so bold and gaudy they nearly glowed in the dark, supplemented by huge wavy title lettering and a nocturnal backdrop.

Divided into 12 separate tracks, one for each astrological sign, it appeared just as both psychedelic rock and astrology itself were coming into vogue in the youthful counterculture. In some respects it was similar to other instrumental psychsploitation albums of the time, with a spacy yet tight groove that could have fit into the soundtrack of 1966 Sunset Strip documentaries, played in large measure by seasoned Los Angeles session musicians. In other respects, it was futuristic, embellished by some of the first Moog synthesizer ever heard on a commercial recording, an assortment of exotic percussive instruments, and sitar.

The arrangements were further decorated by haunting harpsichord and organ, along with standard mid-1960s Los Angeles rock guitar licks. For those who took the astrology as seriously as the music, there was the dramatic reading of narrator Cyrus Faryar, musing upon aspects of each astrological sign in a rich, deep voice without a hint of irony.

Only a few of the musicians involved in the album were listed on the back cover, and much mystery has surrounded the conception and realization of the record in the ensuing years. As it happens, though, the album featured some of the creme de la creme of the Los Angeles session musician clique, as well as some notable contributors with strong ties to the early-1960s folk music that had been Elektra's backbone prior to 1965. In addition, there were precedents for albums not tied to a particular artist in the Elektra discography.

Only two or three years before, the company had released a 13-volume series of Authentic Sound Effects, as well as records on how to play bass and blues guitar. The Zodiac: Cosmic Sounds was not an accidental one-shot aberration from an out-of-control producer, but in fact instigated by Elektra founder and president Jac Holzman himself.

Producing the album was Alex Hassilev, one-third of the Limeliters, the successful pop-folk group of the early 1960s who had recorded their debut LP for Elektra in 1960 (followed by numerous other ones for RCA). Hassilev had recently formed a production company with Mort Garson, who had arranged one of Alex's RCA albums (as well as doing some arranging for fellow Limeliter Glenn Yarborough).

Elektra was the type of label to take risks that others might have dismissed as reckless. "Jac, being a very adventurous guy, sonically speaking, really believed in finding new things," enthuses Hassilev. "He bought the idea of doing a kind of electronic score for this project. And Mort assembled this group of musicians, including Paul Beaver. Percussionist Richards boasted a staggering array of credits. Over the course of his lengthy career he has worked with everyone from Henry Mancini, Dizzy Gillespie, and George Harrison to Frank Zappa, Frank Sinatra, Marvin Gaye, Linda Ronstadt, and Herb Alpert, as well as on over 1700 Movies.  It was the Moog that supplied the freakiest swoops and textures on The Zodiac, and the greatest challenge to capture on tape. "The Moog, while a wonderful instrument, had very unstable oscillators," explains Hassilev.

Filling out the personnel for The Zodiac on more conventional guitars, bass, and drums were top Los Angeles sessionaires, although unfortunately the precise names and details have been lost to memory. Hassilev is fairly certain that bassist Carol Kaye and drummer Hal Blaine--both at the very top of the list for rock, pop, and session calls in Los Angeles in the 1960s--comprised the rhythm section. Holzman thinks Blaine was on the date for sure; Cyrus Faryar remembers Bud Shank playing bass flute, and Mike Melvoin, who played on numerous jazz and pop sessions (including some harpsichord on the Beach Boys' Pet Sounds), contributing keyboards. Kaye, who did uncounted sessions in the 1960s (including some others with Garson, and some other dates with Beaver), recently confirmed after listening to the record that it is indeed her on bass: "That's me on the whole thing. [The] double paradiddles, tons of slides, and the octave licks [are] typical of my playing." Garson, she adds, "was an extremely talented arranger. I can see his face now, sort of smiling here and there as if he was up to some mischief."

Once the music was finished, Moog and all, one more component would be needed to put it to bed. This was the spoken astrological narrative, written by Jacques Wilson, and voiced by Cyrus Faryar. Like Hassilev, Faryar was a young veteran of the early-1960s folk boom, having played with Dave Guard and the Whiskeyhill Singers (led by ex-Kingston Trio member Guard, and also including Judy Henske) and the Modern Folk Quartet. Also a session musician who played on some of Fred Neil's finest records, he was well known to Hassilev.   Over the years Faryar (who eventually recorded a couple of albums himself on Elektra in the early 1970s) came across admirers of The Zodiac and his narration in some of the most unexpected places. At one party he met the late Graham Bond, the brilliant but erratic British blues-jazz-rock musician noted for dabbling in the occult, who moved to the States in the late 1960s.

For years afterward, Hassilev had a studio in Los Angeles and continued to produce, working on projects as diverse as albums by Hoyt Axton and Ananda Shankar (Ravi Shankar's nephew, who combined traditional Indian music with modern electronics), a single by Seals & Crofts, and commercials with Van Dyke Parks. He's still playing as part of the Limeliters, and still proud of The Zodiac: Cosmic Sounds. "What I chiefly remember is that the recording of the music for me was just a joy," he summarizes. "Working with Cyrus was wonderful, and working with Jac was great too. Jac was there for all the sessions, supervising this whole project. In that period, he was the hands-on for everything."
by Richie Unterberger 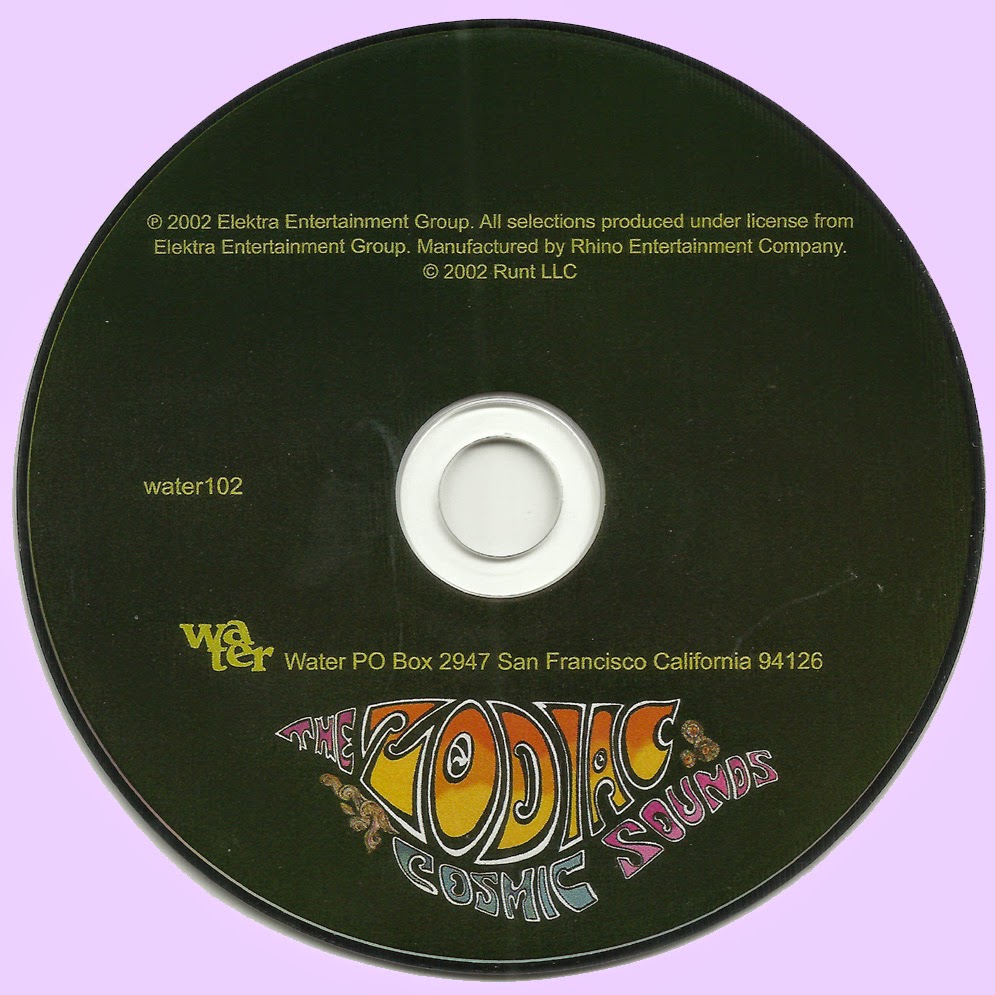