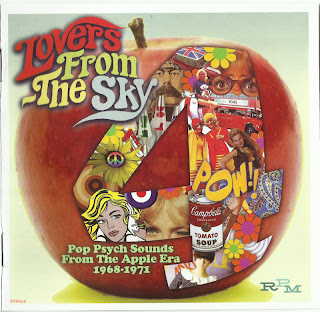 On the fourth volume of this interesting series devoted to songwriters who were under contract to Apple Publishing, the connection to the more public face of Apple -- namely, Apple Records, home to the Beatles and artists like Badfinger and Mary Hopkin -- can be pretty tenuous. Most of these artists did not release music on the Apple label, and some of these songs weren't even published by Apple, although in those cases the writers and/or composers did at least have some Apple connection on their resumes.

Unless that kind of thing easily upsets you, however, you'll find this quite an interesting collection of rarities from the poppier side of British pop-psychedelia, several of which were previously unreleased. With the exception of Merseybeat band the Fourmost (represented by three late-'60s tracks from long after their brief commercial peak, including a 1969 single, "Rosetta," produced by Paul McCartney), none of the artists were hitmakers.

Some did have notable careers or connections, including folk guitarist Stefan Grossman; Brute Force (represented by the notorious naughty novelty "King of Fuh" and his version of "Nobody Knows," which was a minor hit for the Chiffons); Andy Ellison (formerly of John's Children); Timon, the future Tymon Dogg; and Lon & Derrek Van Eaton, who did manage to release a 1972 LP on Apple. Quite a few of the others failed to make the slightest of commercial dents, though a few of them were able to record songs by notable Apple-published songwriters. Marilyn Powell's "Something to Hold on To," for example, was written by Benny Gallagher and Graham Lyle, and the tracks here by Marzipan, Moving Finer, and Ellison were penned by George Alexander of Grapefruit. Based on these 19 songs, Apple's publishing division was largely on the lookout for Beatlesque pop that was more mainstream than the Beatles and fairly commercial.

While none of these cuts seem like obvious hits, they are quite pleasant, and usually quite well-produced, representative samples of British pop-psych that avoid the over-sweetness into which the genre was apt to lapse. Lilting, pleasing harmonies are also to the fore on much of the material, with Promise's demo of "Not Sarah" (one of the highlights) using the Beatles' own Mellotron. the Fourmost sound a bit like an updated Unit 4+2 or hipper Seekers on the folk-poppish "Just Like Before"; Marilyn Powell offers a bit of female pop-soul on "Something to Hold on To," and the Eatons are represented by a demo version of their nice, harmony pop-folk-rock, 1972 George Harrison-produced single "Sweet Music."
by Richie Unterberger 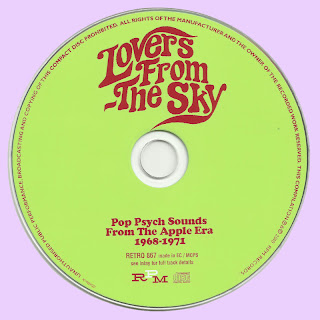 Free Text
Text Host
Posted by Marios at 5:49 AM 8 comments: