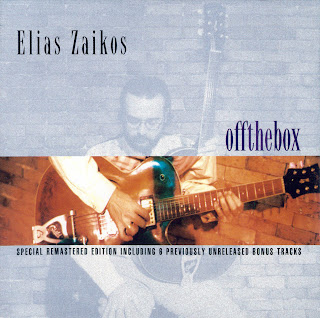 I met Elias Zaikos (in person) few months back, I follow him from his early beginning, he's one of a hell great guy, he loves his music, loves his guitar, (he can play the guitar like most of the people can walk), loves the Blues, well this great magma from Chicago style to Mississippi air and from the Brit tones to Mediterranean smooth.

“Off The Box” is late ‘90’s release with outtakes, live recordings and previously unreleased material. A really enjoyable album with the original Blues feeling, take us back to the sixties Electric sound, the  Band is outstanding, they found a way to talk each other through the instruments, and they are plenty of them, this excellent view of Green’s “Slabo Day” is fascinating with the use of the violin, all the other songs (except “Summertime” which also has the same expressive violin) was written by Elias.

I hope you will love this record and stuck with it, it has something that makes you to hear it again and again, it sounds so familiar but sometimes surprising with unexpected musical passages.
Be well and take care my friend.
Να ‘σαι καλά όπου και να ‘σαι φίλε μου.
(Both of my posts are by his kind permission)

Elias Zaikos was born in 1960 in Thessaloniki , Greece , where he is permanently based. During his early teen years, he showed relatively little interest in music and listened mainly to Greek traditional and popular songs. Sometime around 1976, he was introduced to soul and to rock and roll music. Little by little he got so involved with music that being a listener just wasn't enough. A friend of local rock musicians, he followed them on to their gigs and got a first hand knowledge of the pleasures - but also the difficulties - that are all part of a musician's lifestyle. He soon found out what it really means to express oneself through an instrument.

As he turned twenty, he picked up the guitar for the first time. The six strings became his constant companion and he devoted his time to practicing and playing. Around the same time he discovered the blues, the musical genre that had such a powerful and profound effect on him that he dedicated himself to it completely. A self-taught musician, Elias Zaikos developed a particular technique on the guitar, using a thumbpick together with the bare fingers of his right hand - something he saw for the first time on a live Muddy Waters video.

In the early eighties, Elias Zaikos founded Blues Wire (or Blues Gang, as they were initially named). In 1983 the band recorded the first blues album in Greece , which paved the way for a long series of successful albums that followed. Performing an average of two hundred nights every year in a small country like Greece is an achievement indeed, but Blues Wire have done just that, confirming thus the band's hard work and also its enduring popularity.

The band has played in clubs and festivals in most European countries and received a well-deserved enthusiastic response from audiences everywhere. Renowned guitar players such as Buddy Guy, Louisiana Red and Gypie Mayo have been impressed by E.Z.'s chops and style, and so were the diverse audiences throughout Europe while E.Z. was handing them his fiery and passionate solos: from the singing crowd of Athens to the dancing gig-goers in Trieste and the standing ovation in Austria .

Over the last fifteen years Elias Zaikos has worked together with a great number of artists and earned the respect and admiration of his fellow musicians and peers. Nowadays he is considered to be the most important blues musician in Greece - a guitarist of rare talent and expressiveness, a strong and passionate singer and a charismatic performer. The elements that prevail in his live and recorded work are his complete love for the guitar and an endless quest for the spirit behind the music at all times away from ego trips and other pretensions 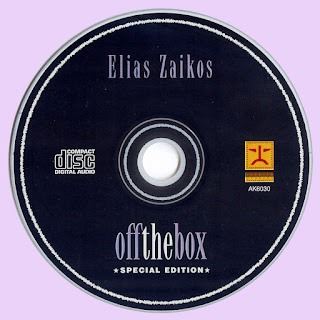 Free Text
Just Paste
Posted by Marios at 7:36 AM 11 comments: