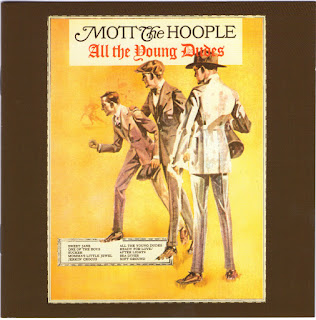 At the time of its release, Mott the Hoople were wallowing in obscurity despite releasing four albums of high-powered boogie. They were ready to pack it in, but David Bowie encouraged them to soldier on, offering Mott the chance to record Suffragette City. The band, though, wanted Drive-In Saturday, which Bowie wasn't willing to part with. All the Young Dudes was the compromise. In the short term, Bowie came out looking the genius, as the band briefly achieved the stardom they felt was rightfully theirs, kicking out their two best albums in the process.

But it couldn't last, and by 1974, guitarist Mick Ralphs was off playing in Bad Company and Mott faded back to the margins.Mott the Hoople are still a widely respected and influential band, and it's pretty easy to hear why-- they've got the swagger, confidence, and riffs of glam and the basic approach of punk.

That's not to mention vocalist Ian Hunter, whose voice was so limited and colorless that he probably made more than a few kids with guitars think if this guy can sing in a band, surely I can. The band, however, found countless ways to work around Hunter, from melodic harmonizing on the choruses that he could yelp and talk-sing over to clever lead guitar parts that Ralphs used to inject hooks into the verses.

So Hunter becomes the everyman, just trying to get by, and the tension between the band's chops and his lack of skill and range is oddly poignant. All the Young Dudes closes with the dejected piano ballad Sea Diver, a crushingly sad song that uses a diving bell as a metaphor for being trapped in a failed relationship.

Hunter's inability to get through half an octave without cracking or morphing into a dock worker's shout sucks out all the maudlin potential of the piano part and string arrangement, turning them instead into a kind of security blanket. It's a strikingly emotional capstone to an album that mostly trades in funky rock and roll and leather-pantalooned swagger.

Young Dudes highlight Sucker is a slow, cowbell-guided rocker adorned with sax interjections from Bowie; it features a killer call-and-response between a harpsichord and a wordless backing vocal phrase on its chorus. The reissue appends a thunderous live version that suggests the band's true power wasn't really captured on any of its records. However, there's also a live version of Sweet Jane that's as forgettable as the studio version that leads off the original album.

Conventional revisionist rock crit wisdom says this is a five-star record, but in truth it's not even close, and that song is a big part of the reason.Elsewhere, a primordial version of Ready for Love pales in comparison to the version Bad Company took into the charts two years later, but the band gets in some strong hard boogie tunes on Momma's Little Jewel (the early demo version added here, called Black Scorpio, is even nastier) and One of the Boys, the rocking follow-up single to All the Young Dudes. Bowie-philes will love the version of All the Young Dudes featuring his vocal, even though it's weaker than the version everyone knows.
by Joe Tangari 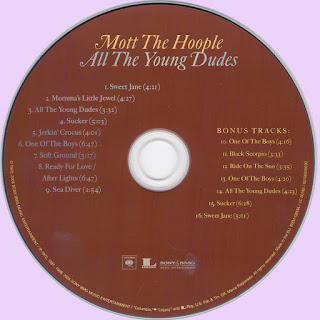 Free Text
Text Host
Posted by Marios at 5:48 AM 4 comments: