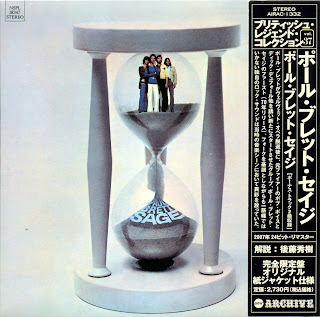 The colour of Sage , most likely purple with streaks of blue, well that’s if you’ve ever listened to Paul Brett’s Sage. The multi-colored juggled history of Paul Brett most likely started with the group SW4 headed by future Blonde On Blonde Ralph Denyar. Paul would also replace Jimmy Page in Neil Christian & The Crusaders. A brief entry into the Arthur Brown Union yielded their first single, the Pete Townshend produced “Devil’s Grip” with Ronnie Wood on bass.

After brief excursions in 1967 with the Overlanders and Warren Davis Monday Band, Paul would enjoy sessions with the Dave Terry Band which later evolved into Elmer Gantry Band. The age of psychedelia had provided enriched pathways for the gifted Brett as he took his riffs to Tintern Abbey and springboarded from their into the melting pot of Elmer Gantry’s second album Ride A Hustler’s Dream which pushed out an urgent version of Blind Willie McTell’s “Statesboro Blues”.

The roads were many and the options countless but a distinct destiny drew Paul into the Soulmates where he met the gifted twelve string guitarist, ex Levee Breakers Johnny Joyce who at that stage had just left Velvet Opera. The group Friday’s Chylde had just metamorphosed into Fire and churned out a surging psyche single called “Father’s Name Was Dad” with future Strawb Dave Lambert on lead. Paul would enter for the 1970 conceptual Magic Shoemaker, acknowledged as a masterpiece in the same spirit as the Small Faces’ Ogdens' Nut Gone Flake.

The Brett sessions Paul’s sessions were scattered and endless as he persued the majestic chord that David once held in his Solomon wisdom. Amongst the chosen and frozen were poet Roy Harper’s unforgettable Sophisticated Beggar, Al Stewart’s Zero She Flies alongside Jimmy Page ..the “Volcano” and “Mary Jane” singles honed from Elmar Gantry’s debut which did not include Paul as an official member.

Paul would further his sessions with Strawbs on Dragonfly (lead guitar on "The Vision Of The Lady Of The Lake") and various singles included on Classic Strawbs. To add to this magnificent database Paul Brett also filled in the gaps with The Ivy League, The Flower Pot Men, Status Quo, the prolific Barclay James Harvest, ex Strawbs - Hudson & Ford, Max Bygraves, The Cyril Stapleton Orchestra, Lonnie Donegan and folk stalwart Ralph McTell, known for his hit “Streets Of London”.

The first coming of Sage ignited when ex Fire lighters Dick Dufall and percussionist ,vocalist Bob Voice joined lead guitarist Paul Brett to form Paul Brett's Sage with added employment of Nicky Higginbottom on flute and sax. The 1970 self titled ‘Hourglass’ debut was celebrated by the superb seven inch “Three D Mona Lisa” / “Mediterranean Lazy Heat” riddled with superb time signatures. The album was a shivering fusion of bongos , astounding acoustic and pulsing rhythms superbly enhanced by Jethro Tull arranger David Palmer.The percussive rhythms of “The Sun Died” and bass ambling “Little Aztec Prince” are the core style of this story tell album. Often not told are the superb lyrics ..”Reason For Your Asking” - .’You asked me why a flower died and why the Eastern horsemen rides, Why the silver lash of rain hides footprints in the dusty lane’ . Tolkienistic dimensions and apocalyptic visions cradle “Trophies Of War” and the severing “Warlock”. The 1971Jubilation Foundry, more of an acoustic affair and in hindsight Sage’s most established creation with it’s mature fusion of acoustic and harmonies now included ex Titus Groan Stuart Cowell as lead guitarist who later did some amazing things with Al Stewart.

Paul King who later played with Lambert in the King Earl Boogie Band played the harmonica on Jubilation. The album yielded the single “Dahlia” / “Cottage Made for Two”. A strong country element threads the album with elements of Strawbs, Magna Carta but a more definitive pick can be found in the heart sagging “I Fell So Far” and harmony filled “Tuesday Evening”. A cry from the gutter to the utter spills out of “Help Me Jesus” an eerie bluesy ballad that carries it’s message into the follow up holler “Jubilation Foundry”.

By the time the 1972 Schizophrenia hit the shelves Sage were back into electric with some stirring lead fusion on “Custom Angel Man”. a psychedelic master of note. The album enlisted Dave Lambert on piano and organ. Schizophrenia also sprouts some very fast guitar and nifty riffs on “Song Of Life, “Song Of Death” and “Slow Down Man” with Rod Coombes on drums. In the spirit of Jubilation’s “Tuesday Evening” those S&G harmonies reel through “Tale Of A Rainy Night”. Rob Young stepped in for the flute and oboe on the exquisite “Autumn”, a Strawb template in anybody’s book. Paul brett would later team up with ex Levee Breakers Johnny Joyce from Velvet Opera as an acoustic duo and then Cyril Stapleton Orchestra (with Dave Palmer of Jethro Tull and Bob Voice of Fire.

The definitive purchase must be Fretdancer by Paul and that 12-string mandarin called Johnny Joyce that even Shawn Phillips stands in awe of. Paul Brett continues to record, evolving with each recording. Sadly Johnny Joyce passed from this world to a far greater dimension.
by Shiloh Noone 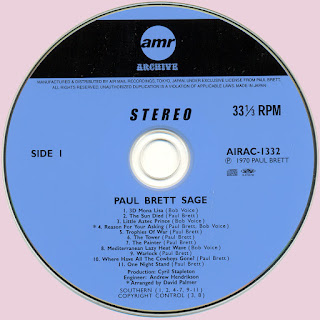 Free Text
Just Paste
Posted by Marios at 7:33 AM 13 comments: