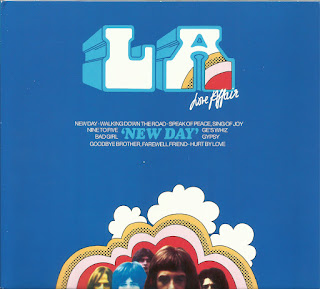 During the summer of 1970 Love Affair began recording the tracks destined for "New Day". The music here is something of a revelation and stills up after forty or so years ago. The album open with the tittle track, written by Mick Jackson, which sets the tone with bold progressive themes. Menacing chords from the keyboards help build up the tnesion befoe the drums come in and Gus Eadon sings with passionate clarity.

In May 1970 the group appeared on BBC TV's Top of the Pops to promote their single version of "Speak Of Peace, Sing Of Joy" looking very determined and serious as they played the four minute number "Live".

But it was an uphill battle to play down their old pop image. The LA name was quietly drop the group reverted back to Love Affair. By the end of the year, August 'Gus' Eadon had left the band. In 1973 he released a solo single Times Are Hard Now, Aint They?' / 'Ladybird' on the Dawn label. In 1974 he joined jazz rock group Zzebra, billed as 'Gus Yeadon' and played piano, guitar, flute clavinet. The band also included Terry Smith (guitar), Dave Quincy (sax) from If and John McCoy (bass) who later worked with Ian Gillan. Zzebra released an album on Polydor and a single, 'Zardoz', used to promote the film 'Zardoz' starring Sean Connery. Gus left Zzebra after a year and joined the Darryl Read Band in1979

After the failure of LA, Morgan Fisher and Maurice Bacon formed a duo called Morgan and released an album 'Nova Soils'. Morgan later joined Mott The Hoople and also worked with Queen. He played in short lived British Lions before moving to Japan in the 1980s, where he lives, studies meditation rarks as a prolific recording artist.

Love Affair's original vocalist Steve Ellis formed his own band Ellis in 1972. This subsequently Ellis Group, with Zoot Money on keyboards. They released the album  “Crest Of A Slump', which was produced by The Who's Roger Daltrey. In 1974 Stever joined the heavy rock outfit Widowmaker. They toured America supporting The Who without much success.

Steve Ellis signed as a solo artist with Arista in 1979 and recorded 'The Last Angry Man', an album destined to be shelved for some years. In 1980, he quit the music business and took up a job as a dockworker. Sadly he was involved in a serious accident when a forklift truck cut his feet and left him incapacitated. He spent the next eight years in and out of hospitals. Steve eventually learned to walk again and took up singing once more in 1991. In December 2001 he joined old friend Paul Weller on stage at a concert in Croydon for a heart-warming acoustic version of “Everlasting Love”.

In final twist to the saga “Love Affair” without Steve or Gus, but with three original members Morgan Fisher, Mo Bacon and Michael Jackson - were reunited in 1999. They appeared in a TV documentary and wrote a new song together called 'Love Affair By Love Affair', which encouraged them to reform the band once more in 2000.
by Chris Welch, London England, December 2007 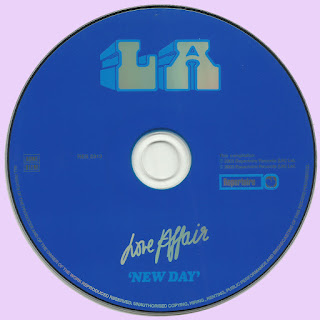 Free Text
Text Host
Posted by Marios at 4:00 AM 10 comments: