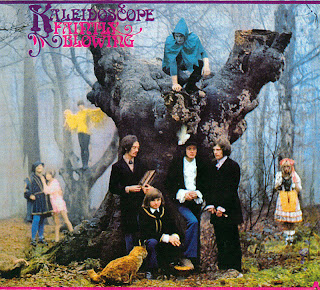 Kaleidoscope was one of England’s purest and most beloved psychedelic bands.  Prior to their ventures into psychedelia, Kaleidoscope had been known as The Sidekicks and then, The Key.  These groups played a rather ordinary brand of British pop and R&B.  Kaleidoscope debuted in 1967 with their fabulous Tangerine Dream LP.  This disc featured some of the finest psychedelia England had produced up to that point.

More than half the album is fleshed out with lost classics; check out trippy tracks such as ”Please Excuse My Face,” “Dive Into Yesterday,” “Flight From Ashiya,” “The Murder of Lewis Tullani,” “Mr. Small, The Watch Repairer Man,” and the superb “Further Reflections In The Room Of Percussion.”  Many of these cuts are on par with the best of Pink Floyd’s early work.  Kaleidoscope was making imaginative music featuring plenty of interesting chord progressions, jangley guitars, bizarre lyrics, and smart production trickery.  Much of the rest of Tangerine Dream is very good too, but sales and critical recognition stiffed due to the adventurous nature of the group’s music.

Faintly Blowing (Fontana) came out sometime later, in 1969.  While it may lack some of the key album cuts that made Tangerine Dream so special, Faintly Blowing is consistently strong and features influences as diverse as folk and hard rock.  Some of the highlights include “Poem,” a soft folk track similar to “Please Excuse My Face,” the phased out hard rocker “Music” and the edgy psychedelic title cut.  Abrasive numbers “Snapdragon” and “Love Song From Annie” represent Kaleidoscope’s new hard rock approach while still retaining the group’s clever edge – these cuts are both gems.  Some songs’ lyrics, like that on the tuneful folk-rocker “A Story From Tom Blitz,” deal with morals and important life lessons to be learned.

The music on Faintly Blowing is a bit more professional sounding, lacking the reckless energy and psychedelic feel of the debut.  But make no mistake, this is a very good album full of sharp ideas, fairytale lyrics, fine songcraft and pretty vocals.  If you’re intrigued by psychedelic, progressive or folk sounds, this disc is not to be missed.
by Jason Nardelli 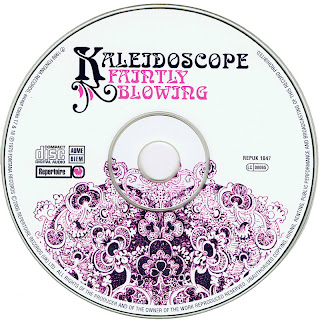 Free Text
the Free Text
Posted by Marios at 1:30 AM 2 comments: