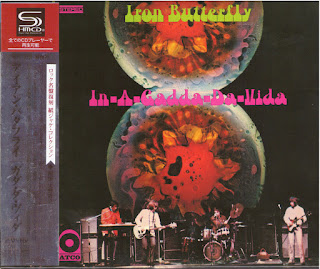 Iron Butterfly are a fluke in the music world. Their sound is one thing and another all at once. Basically, they're psychedelic, with creepy classical Vox organ by Doug Ingle, Middle Eastern influenced guitar by Erik Brann, a nd tribal drums by Ron Bushy. But there's also a hard edge to it, which explains why the album has been cited as a big influence on heavy metal.

Their winding instrumental breaks also inspired Black Sabbath and the like as well. There's also a slight pop feel, close to bubblegum on "Flowers And Beads," sort of a hippie take on those classic '60s Dion/Righteous Brothers sort of thing. Mainly, it's all mystique and trippy soundscapes.  Sound quality is pretty good. Except for "Termination," the songs were written by vocalist/organist Doug Ingle.

For this album, he crafted love songs, and dreamy tales of exploration. "Mirage," a tribute to a friend just passed, is one of the best. "Termination," inspired by Greek myths, is by far the most colorful, though. All in all, not bad.  In-A-Gadda-Da-Vida was Iron Butterfly's second album. Vocalist/organist Doug Ingle and drummer Ron Buhsy are joined by newcomers Lee Dorman and guitarist Erik Brann, the latter adding great depth to their sound. "Most Anything You Want" is a great fun opener, "Termination" is a psychedelic classic, and "Mirage" is just dreamy.

But as we all know, the best song is the title track, that great 17-minute finale with wild solos and all kinds of metal-prophesying arrangements. It made them famous and remains one of the best moments of the late 1960s. This is Iron Butterfly's most important album, and includes their most important song. It's a gas.
by Avram Fawcett 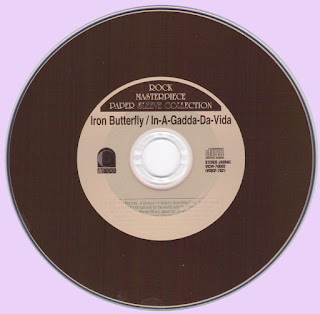 Free Text
Text Host
Posted by Marios at 9:03 AM 1 comment: