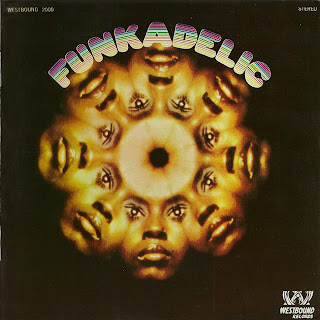 Funkadelic, arguably the greatest "black rock" band ever...Actually, strike that, they are far and away the best black rock band ever. In fact, screw everything, they're one of the greatest rock bands period, up there with any classic rock dinosaur you care to name. And though it's tempting to launch an essay on the racism of rock radio-- or rock journalism for that matter-- I'll stick to the band. Even as they're revered as legends and purveyors of the some of the best funk of the 70s, I've read relatively few accounts on their greatness as a pure rock band. But they had it all: great players, great singers, a great look, a great concept, actual hits, great albums, great drugs, freaky sex, disputes over money-- everything Led Zeppelin (or Spinal Tap) taught us was necessary to make the world's greatest rock music.

They started small, backing up ringleader George Clinton's Parliaments in the late 60s. When Clinton got into arguments with his label Revilot over money and rights, he decided to start recording his backup band instead, using the original Parliaments singers (Clinton, Ray Davis, Clarence "Fuzzy" Haskins-- and come on, dude's name is "Fuzzy"-- Calvin Simon and Grady Thomas) as "guests." Guitarists Eddie Hazel and Tawl Ross, bassist Billy Nelson, drummer Tiki Fulwood, and eventually, master keyboardist Bernie Worrell were the band that would turn this fairly traditional soul group into the intense live act that wowed Detroit's Westbound Records head Armen Boladian. He signed them, and from the get-go, their music cut through genres and money bullshit like neither had ever existed. Never mind that half the band quit and came back again during recording sessions for their first record, Funkadelic was destined for greatness. Ace's reissues of the band's Westbound catalog is long overdue-- they sound a world better than the terribly mastered original CD pressings, and contain a wealth of bonus tracks, alternate mixes, and liner notes.

Funkadelic from 1970 was a bomb dropped all over rock and soul. No matter Hendrix, no matter James Brown, no matter the MC5, nobody had ever heard anything like this. This music was slower than sludge, dirtier than the "raw funk" Herb "Sparky" Sparkman talks about in "Music For My Mother". It was a great big fucking mess, and a lot of people didn't know what to make of it. I remember reading a Rolling Stone review from the time that ended with "who needs this shit?" and a writer from the Blues & Soul 'zine from a year later admitted, "Funkadelic has never been one of my favorite R&B; acts". Still, the record sold (peaking at #16 on the Soul LPs chart), and planted the seed of a cult worship that would balloon in the latter half of the decade, making the P-Funk enterprise the most successful soul act on the planet.

"Mommy, What's a Funkadelic?" started out with the sound of Clinton's wet mouth and the best ever opening line for an album: "If you will suck my soul, I will lick your funky emotions." When the beat hits with Hazel's guitar line, there can be no doubt that Funkadelic were without peer as far as this stuff was concerned. This stuff-- hell, tunes like "Mommy" and "Good Old Music" are slams to the gut as powerful as anything Zep ever did, and with beats to spare. "Music For My Mother" is like a Southern myth, detailing a loner's travels through "Keep Runnin' Mississippi", hearing music he thought long dead, yet getting trapped by its sticky black allure. "What Is Soul?" drops more classic lines ("soul is a hamhock in your cornflakes," "Soul is chitlins foo young," "soul is a joint rolled in toilet paper") in seven minutes than most bands muster up in a career. Bonus tracks like the tight instrumental "As Good As I Can Feel" and several single versions of album cuts make this album one of the most indispensable of all indispensable Funkadelic records.
by Dominique Leone 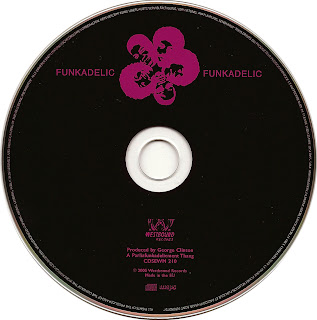