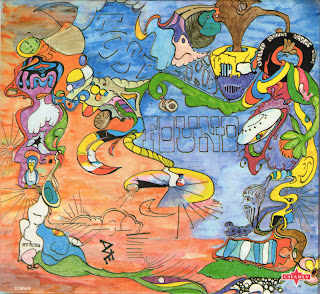 Emerging from the same mid-60s Houston, Texas scene as label mates Thursday's Children and The Red Crayola, Lost And Found were formed in 1965 and originally called themselves The Misfits, consisting of Peter Black on guitar and vocals, Jimmy Frost on lead guitar, bassman James Harrell and - after a succession of drummers - Steve Webb. Part of the nationwide explosion of local bands springing up in the wake of the British Invasion (and America's immediate musical responses), the group busied themselves, with local appearances. They developed quite a following, often playing shows in Houston at the famed venue La Maison, where they became the house band alongside The Six Pents and Baroque Brothers.

Later, they also frequented Love Street, which opened in June 1967. A pivotal moment in Lost And Found/The Misfits' history came in early December 1965 when artist friend George Banks - who would later form the Flash Graphics company, producing most of International Artist's artwork - took Harrell and Black to the Jade Room in Austin to see the debut performances of the newly-formed 13th Floor Elevators, who were to have a huge influence on The Misfits' sound and approach to songwriting. The two groups' friendship, sparked at a La Maison show early in '66, would eventually lead to an introduction to the infamous International Artists label in Houston.

At some point early in their career, the group, minus Jimmy Frost, split to Los Angeles with buddies Euphoria, hanging out on the West Coast for a couple of months until poverty and general apathy forced a return to Houston. Their time spent on the West Coast, however, was not entirely wasted, as the emphasis on melody and memorable hooks so common to the City of Angels clearly seeped into the boys' songwriting, with elements of The Byrds and Love being most evident.

Upon their return, at the start of a six month residency at Scott Holtzman's Living Eye Club in Houston and later immortalized on their albuml, they attracted unwelcome notoriety as the first Texas group busted for LSD. However, the charges were supposedly dismissed, following confusion as to the drug's legality - it had only just been outlawed a month earlier in October '66.

As paranoia and suspicion were already rife in the conservative Texan atmosphere with regards to the "longhairs", it seems that one positive factor in the group's association with International Artists was that owner-lawyers Bill Dillard and Noble Ginther could potentially offer support with regard to legal matters, as they were already doing and would continue to do with the Elevators! Around this time, and possibly due to the negative associations with their name following the bust, the group finally became Lost And Found.

In August 1967, the group entered Andrus Studios in Houston to cut their one and only album, working with producer Lelan Rogers and engineer Frank Davis. Made up of mostly original material written by Harrell and Frost, except for a cover of the Elevators' 'Don't Fall Down' from that group's Psychedelic Sounds album, it's a strong debut, melding the influences picked up on their LA jaunt with more esoteric elements picked up from the Elevators, and their mystical quest for pure sanity.

Standouts for this writoi include 'There Would Be No Doubt', with its echoing of the sentiments of the Elevators' 'Reverberation', the pure teen-rush-mania of 'I Realize' and the closing 7_ minute instrumental opus 'Living Eye'. The lattoi successfully combines elements of 'Eight Miles High' and 'Smokestack Lightning', highlighting the group's instrumental prowess, and giving an indication of their on-stage majesty.

Two blues tracks, the instrumental 'Zig Zag Blues' - dedicated to the founder of the Zig Zag cigarette rolling paper company- and '2 Stroke Blues' - NOT dedicated to 2-stroke oil and lawnmower engines, but a hymn to making sweet lovin'! - make it fairly clear that the group were no Butterfield Blues Band, but they're pleasant enough, and certainly contribute to the overall diversity of the LP.

The afore-mentioned Elevators cover, 'Don't Fall Down', is interestingly re-structured, starting with the chorus, and working though a startlingly different arrangement to the original. 'Everybody's Here' is part stoned declaration, part Dylan parody, whilst 'Let Me Be' is a nippy little number, slightly marred by the group's failed attempt to emulate the Elevators' unique jug sound.

The album was released in late '67 as IALP#3 and was the first International Artists LP to be released in stereo only, housed in a suitably psychedelic George Banks-designed sleeve. The album had been preceded by a single release of two of its titles, 'Forever Lasting Plastic Words' backed with 'Everybody's Here'. The largely anonymous sleeve - no full band names or photos, justshadowy images - contributed to lA's aura of mystique, which was actually borne out of their complete paranoia over the contents of their catalogue!

The back of the original album sleeve featured two short sleeve notes, both of which are reproduced in this booklet. The first, written by Lelan Rogers, praises Frank Davis' engineering skills whilst the second one, by George Banks, details his intended meaning behind the sleeve design. As with The Red Crayola's Parable Of Amble Land IP, each of the song titles has a brief excerpt from its lyrics added underneath it and which we have reproduced in the track listing at the back of this booklet.

Presumably these were included to summarise the meaning of each of the tracks. History indicates that, for the most part, International Artists were unable, or unwilling, to effectively promote any of their releases, their only two hit singles - the Elevators' You're Gonna Miss Me' in '66 and Bubble Puppy's 'Hot Smoke And Sassafras' in '69 - being as much down to chance and good fortune than to any promotion and marketing by the label. Lost And Pound's album was afforded the same lack of promotional nous, being held back from its intended release date to allow International Artists to promote the second Elevators LP, Easfer Everywhere.

The same fate befell their labelmates' The Golden Dawn's masterpiece, Power Plant, which was also recorded in the summer of '67 and held back for release until early the following year. As an aside, sonically-speaking the two IPs have a lot in common. It could be argued that by using the same studio, producer and engineer, similarities were bound to crop up; certainly, the slightly thin, demo-like quality of the production on both LPs sounds a little rushed, almost unfinished in places.

The fragile, somewhat whiny quality of the lead vocals also draws immediate comparisons, but it's clear Lost And Found had their own sound: OK, they wore their influences on their collective sleeve, but when your influences are that good - why not?!

Further songs were demoed by the group in February '68 to provide material for a proposed second album which never saw the light of day. One of these songs, '25 MPH', eventually showed up on lA's 1980 Epitaph For A Legend compilation. What did appear later from the group in 1968 was a second single, this time produced by Fred Carroll, Lelan Rogers having left the label acrimoniously in February.

This was an entirely different ballgame, the group this time being allowed to cut loose and do their own thing in the studio - allegedly, IA had toned down their previous recordings. Both songs - 'When Will You Come Through' and 'Professor Black', co-written with George Banks - burn with a peculiar intensity, especially the former, with its berserk squalling guitar, fuzzed-out bass and busy drums. It's almost as though the group, knowing that their remaining time was to be short, decided to throw all their enthusiasm, pent-up frustration and sheer "fuck you" attitude into the mix! Unfortunately, like the previous single and LP, it tanked, effectively stalling the group's career. Despair set in, and the group was close to collapse.

International Artists had earlier booked them on a tour of Texas, Louisiana and Alabama with garage legends The Music Machine. When they returned, IA informed the group that they owed the label money; they had made nothing from the tour, nothing was happening with the album, so they finally split in the summer of'68.

There next emerged an unusual sidebar to the Lost And Found story. Still under contract from IA, Pete Black and James Harrell were reluctantly roped in to play about a dozen dates with Stacy Sutherland and Danny Thomas (subbing for the departed Roky Erickson and Dan Galindo) in a ersatz version of The 13th Floor Elevators, ostensibly to promote the release of the fake Elevators Live album in July of '68.

A weekend of shows in late August at The Vulcan Gas Company in Austin, with support from New Atlantis featuring Dan Galindo, was met with a degree of indifference, and overall disappointment: although the group was good, it wasn't the Elevators!

The same line-up was booked to play The Vulcan again at the end of September and, after approximately ten more shows, finally called it quits. Pete Black and James Harrell both joined Endle St. Cloud, that group covering both sides of the final Lost And Found single on their 1970 International Artists LP, Thank You Very Much. The group later evolved into Potter St. Cloud, which included Steve Webb on drums. (MOLE)

This 2009 issue UK Strictly Limited Deluxe Edition 13-tracK CD album - One of the most influential independent record companies of its day, International Artists has gained cult status over the years, particularly amongst fans of prime American psychedelic and garage rock.

Roky Erickson from the 13th Floor Elevators introduced Lost & Found to Lelan Rogers of International Artists, who promptly signed them up. They then recorded their one and only album, 'Everybody's Here', in the summer of 1967.

This latest title in Charly's series of limited edition reissues of key IA albums comes expanded with the 3 Bonus Recordings: 'When Will You Come Through', 'Professor Black' & '25 MPH'.

Presented in a rigid digibook sleeve, complete with a 16-page bound-in illustrated booklet featuring an authoritative, contemporary overview of the band and its music by EIL's very own Matt Lambert, as well as reproductions of the album's two original notes!). 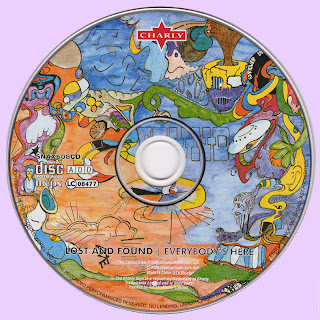