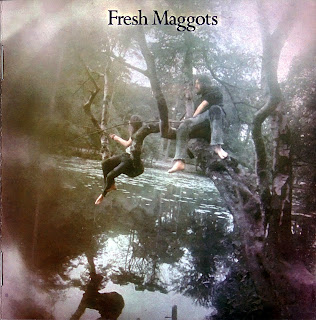 The sole album by Fresh Maggots came and went very quickly at the tail-end of 1971, but in another sense it has never really gone away. Collectors have nudged the price of originals ever upwards, it has been bootlegged repeatedly and is now established as an 'acid folk' classic - facts that amaze its co-creators, Mick Burgoyne and Leigh Dolphin. They'd known each other  "since we were babies in pushchairs on the same housing estate in Nuneaton,"  as Leigh puts it today, but only really became friends when they met again as teenagers on the town's small live circuit in the late 60s. By then Mick was playing electric guitar, glockenspiel, violin and tin whistle, while Leigh had become a superb acoustic guitarist.

They promptly teamed up and started to write songs that combined their love of both rock and folk. "We were into Led Zeppelin, Deep Purple and Taste as well as Pentangle and so on,"  Leigh explains, and as a result they decided to beef up their sound with heavy doses of fuzz guitar. "A fuller sound was important in clubs, and the fuzz gave us sustain. Without a band behind us, we needed that boost."

Their unusual and not entirely serious name was gleaned from an ad on the front of the local paper, for 'Riley's Sports Shop -fresh maggots always available'. "We never thought we'd get anywhere, so it didn't matter what we were called," Mick says. "Maybe Always Available should have been the album title!" But an unexpected break came their way in September 1970, when Mike Berry -a music publishing hotshot who'd handled the Beatles' catalogue at Apple -came to watch another act playing in a local Church Hall.

Mick and Leigh were the support, and though it was only their second gig, it was them that Berry promptly signed to a management contract. "After that, things started to happen very quickly," continues Mick. "He got us straight down to London to make a live studio demo, which he hawked around various record companies.  We then did a gig in his office in Oxford Street for anyone who was interested and, on the strength of that, RCA sent some people to a gig in Coventry. Halfway through there was a powercut, but we just carried on. They were so impressed that they signed us on the spot."

In their original press release, Mick described the extent of their ambitions as being "just to walk on stage with our gear, say hello and try to make as many people as possible a little more cheerful," so the swiftness with which they found themselves in Radio Luxembourg's studio at the end of 1970 was a little overwhelming. "We had no autonomy or real input into the album," Leigh reflects. "We were still teenagers - just a pair of naive kids, really." Despite that, the record they made was varied and powerful - and certainly belies their youth.

Dole Song, for example, is one of the most intense songs of the entire period.  A sardonic celebration of unemployment, its blend of violent acoustic and fiery fuzz guitars makes for a stunning opening gambit. Leigh describes it as "a bit of a piss-take, really. I was signing on at the time and had to explain to the officials that just because I was making an album didn't mean I had a penny to my name." Rosemary Hill, by contrast, is delicate and melodic. "We used to take Mick's old van down to Devon to visit friends and write songs. We'd drive past this hill in Kenilworth, and agreed it would make a lovely name for a song, though the song's not actually about the hill." Quickie is a brief romantic tune, followed by Everyone's Gone To War, a fuzz-laden anti-war polemic. "That subject was close to a lot of hearts at the time," he says.

By contrast And When She Laughs is a cheery pastoral, led by Mick's tin whistle and showcasing the duo's more carefree side. Spring, a complex, carefully-structured number featuring powerful Eastern-style strings, precedes Balloon Song, a spirited piece of whimsy that is perhaps the most redolent of its era, albeit propelled by fuzz guitar.

The gentle Guzz Up owes its odd title to "a parody of the Nuneaton accent, as in 'what goes up must come down'," explains Leigh, while Who's To Die? is a meditation on mortality, inspired by an unsettling accident the duo witnessed. "We were on our way to a Magna Carta gig in Coventry," he says, "and we saw a little boy run out in front of a car and get knocked over. We never knew whether or not he was killed, but it was shocking and got us thinking." The instrumental Elizabeth R is light relief by comparison - "we meant it to sound Elizabethan, but I'm not sure we succeeded. Its name was taken from a TV series on at the time." An immediate contrast is provided by Frustration, which closes proceedings in epic style, alternating mellow passages with further storms of guitar.

It was an unquestionably unusual collection, but - despite their initial enthusiasm - RCA had grown sluggish. "Throughout 1971, things moved pretty slowly," Mick says. "Everything was being done in London, but we were from the Midlands and had day jobs, so it all had to be recorded at weekends. Then there were delays with the string arrangements, and even the cover - they rejected the original artwork, which featured an old water mill." Fresh Maggots was originally scheduled for release on RCA's Neon subsidiary (with the working title Hatched), but finally emerged on the parent label in September 1971, fully a year after the sessions had commenced. It received extravagant praise in the music press ('an extraordinary duo, their range is incredible and their sound is incredibly full,' said Disc), but the label undertook no promotion and the launch party had to be cancelled due to lack of response.

This embarrassment prompted an enterprising RCA press officer to fabricate a tissue of lies about a poolside orgy involving the band, but it did no good. The LP resoundingly failed to sell, and - adding injury to insult - a pressing fault meant many copies had blisters on the playing surface. The duo remained optimistic, however, and played gigs alongside Van Der Graaf Generator, Medicine Head, Wild Turkey and others. They also undertook various radio sessions, and a surviving tape of one (made for Kid Jensen's show on Radio Luxembourg, and included as bonus tracks here) shows what a formidable act they were.

RCA was fast losing interest, though. "They got a strop on, basically," states Mick. "Mike Berry was the sort of bloke who changed with the wind, and he'd soon switched his attention onto the next big thing. We were out playing the college circuit and it all just faded away." Before splitting, however, they released a single (also included here), the sing-along Car Song, backed with the laid-back What Would You Do?, which appeared in December 1971. "RCA didn't really want it out, so they didn't support it either," he says. "And when it didn't sell, that was the end of the road for us, as far as they were concerned."

They returned to Nuneaton and, though they continued to play locally, no more material ever appeared. "We were the young innocents in the big bad music business, and became disillusioned, really," he concludes. Certainly neither anticipated the following they've developed since. "As far as we were concerned, the album was deleted, dead and gone forever," says Leigh. "So we were surprised and delighted when we found out about all the interest around the world." Even more astonishing are the sums collectors are willing to pay for original copies. "I can't believe it," laughs Mick. "I can remember seeing it in Woolworth's bargain bins!" Leigh is also surprised that they are now categorised as 'acid folk'. "To us the album was just a collection of songs," he says. "We only heard of 'acid folk' very recently."

In summary, he remarks that "not a lot of local bands like us ever get to make records on major labels, so it was a great opportunity. But deep down I think we both knew it was never going to be a huge seller." More than thirty years on, Mick has mixed feelings about the album. "Some of it makes me proud, some of it makes me cringe," he says. "I tend to hear all the bits we should have done better, and some of the words are a bit naive. But lots of people tell me they like it just the way it is."
by Richard Morton Jack 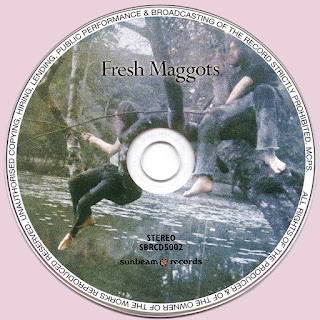 Free Text
Just Paste
Posted by Marios at 6:23 AM 9 comments: