Food - Forever Is A Dream (1969 us, appealing melodious psychedelia with jazz and folk flashes) 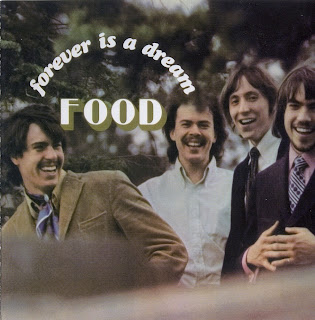 Part of the legendary of most-collectible Capitol psych LPs (along with Gandalf. the Common People and Euphoria), Forever Is A Dream remains largely shrouded in mystery.

Food are known to have come from the East Coast, and though their album was recorded in Chicago, they are thought to have originated in Gurnee, Illinois. Singer Steve White had already sung in a couple of garage bands when he joined, though in this case 'garage' may not be the correct term, as he once recalled Food rehearsing in a refurbished chicken coop.

No sooner had they got a set together than a local producer named Ted Ashford (not a band member, despite being listed on the back cover) got involved. He hawked their three song demo around numerous labels, and eventually Capitol took the bait (they are said to have been signed by the A&R man who discovered Grand Funk Railroad at the same time, which perhaps explains Food's subsequent lack of exposure).

Comfortably installed in Chicago's fashionable Chestnut Street neighbourhood, they set about making an album. White has said that he didn't rate them highly, but their songwriting and musicianship was demonstrably of an unusually high standard, and the label must have invested a considerable amount of money in the sessions, as it features complex orchestral arrangements by Ashford. The album perhaps suffered commercially as a result of its sheer variety - compare, for example, the fragile opening cut with the storming Naive Prayers, or the tender Lady Miss Ann with the experimental Fountains Of My Mind, or the soulful What It Seems To Be with the furious Here We Go Again, which closes proceedings.

Certainly Capitol extracted no 45, and the band splintered soon after the LP's late-1969 release, though they did briefly appear in a party scene in a B-movie that year entitled The Babysitter (directed by cash-in supremo Tom Laughlin and featuring the credit 'Introducing the music of the Food'). The song playing in their sequence is not on the album, though, and the fact that it's sung by a woman suggests it's not them at all.

White went on to a career acting in Bmovies (with the help of Ted Ashford), working with directors including legendary schlock merchant Herschel Gordon Lewis. Ashford, meanwhile, worked with the Grateful Dead and Country Joe McDonald, as well as composing for TV and film and playing in mid-70s country- rockers Heartsfield.

The only other member who sustained a showbiz career was Barry Mraz, who became a leading producer and engineer, working with million- selling acts such as the Ohio Players, Styx and Bachman Turner Overdrive. None of them, however, can have anticipated the cult status their early collaboration now enjoys, and it is to be hoped that as its reputation spreads, their full story will one day emerge. 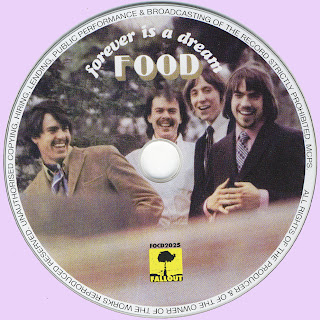 Free Text
Just Paste
Posted by Marios at 8:38 AM 8 comments: