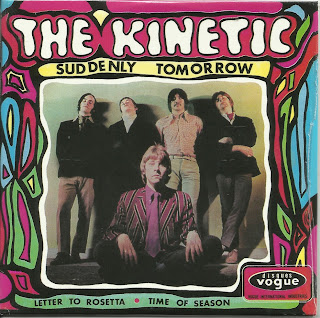 The Kinetic were Andy Mowbray (vocals), Bob Weston (lead guitar), Geoffrey Capper (bass), John Christopher Sze (drums), and Michael Humby (organ). They issued a 10 cut album for Disques Vogue, which is reproduced here, (all self-penned compositions) in 1967, seven of the cuts from which were issued as two EPs. Magic have already reissued these as CD EPs in original sleeves, so if you own those, you don't really need to go here as well.

The Kinetic may be known to readers from their two contributions to compilations, 'The Train', a rollicking R'n'B blues-harp wailing instro and their standout track, the pop-siker 'Suddenly Tomorrow'. The latter title is indeed a cool sike moment featuring big chords, minor scales and a nice '67 feel. It stands head and shoulders above the rest of the album's contents.

More generally, The Kinetic come across at times like a sub-Action. They certainly employ the crisp soul / pop-beat of the times in 'Live Your Life', 'Letter To Rosetta' and 'Sunny Cloud' (think Timebox, Zoot Money, The Cam-Pact etc). They also do a reasonable line in pop whimsy ('Child's Song') and acoustic led balladry (Hall of the Viking', 'Time Of Season' - no, not the Zombies!). Then there's the R'n'B of 'The Train' and 'Willy 'D' Fixer'. The last cut 'Jam Around' is exactly that a banal and mandatory (for the times) slow blues filler instro with interchangeable guitar and keys lead breaks.
Shindig-mag 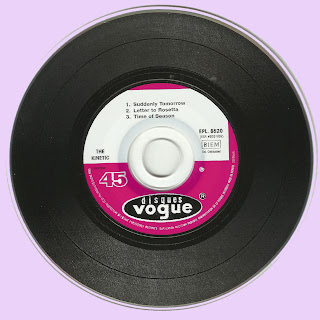 Free Text
Just Paste
Posted by Marios at 5:29 AM 4 comments: