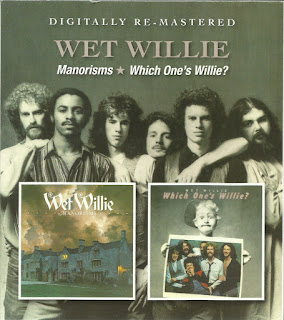 Barely forty minutes long, Manorisms has some killer tracks such as the opening 'Rainman' composed by Mike Duke and the melodic 'Street Corner Serenade', which had some minor success as a single reaching Number 30 in the Billboard Hot 100, Fifteen positions higher than the album's second and final single, the aforementioned 'Make You Feel Love Again', Other wonderfully harmonic songs include 'Let It Shine', 'How 'Bout You' and 'One Track Mind'.

Though Manorisms did not yield any major radio hits and all but disappeared without a trace, peaking at a disappointing Number 118 in the US, it remains a forgotten gem and this CD reissue calls for a rediscovery of Wet Willie's majestic yet often sadly overlooked and underappreciated back catalogue.

The band followed Manorisms with their final studio opus, Which One's Willie? which was unleashed to the public in 1979. Recorded in January through to February of 79 at the Record Plant in NYC and LA, the album shows a distinct departure from their Southern rock roots with a more polished approach to soul as it contains some Wilson Pickett ('Stop And Take A Look (At What You've Been Doing)/Don't Let The Green Grass Fool You') and Eddie Floyd ('You Don't Know What You Mean To Me') covers as well as original songs composed by Mike Duke.

The nine track album has some beautifully sung numbers such as the opening 'Ramona' and the dulcet The Hard Way'. Other songs of note include Tired Dreams' and 'Mr. Streamline', which both show the band's knack for creating efficient melodies.

Which One's Willie? peaked at Number 172 in the US and spawned two singles: 'Weekend' which hit Number 29 and 'Ramona' which failed to chart. Though the album was a commercial failure it has enough strong songs to warrant cult status amongst fans of Southern rock.

Wet Willie folded in 1980 after the release of Which One's Willie? though a new incarnation of the band was formed in the 1990s featuring John Anthony (keyboards), Ricky Hirsch (guitars), Jimmy Hall (vocals) and a revolving line-up of musicians, including the late Marshall Smith (he died in 2006 after suffering from heart problems), Mike Duke andTheophilus Lively.

There's no question that Wet Willie has made an impact on the American rock 'n' roll scene having been inducted into the Georgia Music Hall Of Fame in 1996 and the Alabama Music Hall Of Fame in 2001. Though they may not have achieved the mainstream success that some of their peers achieved, they have a small yet devoted fanbase.
by Neil Daniels, 2013 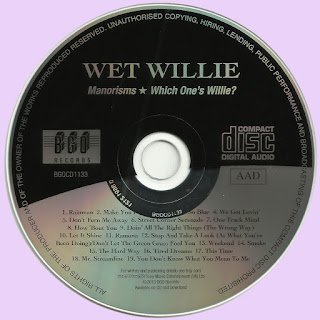