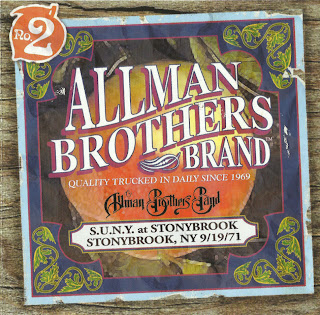 On September 19th, 1971, the Allman Brothers Band rolled into Stonybrook, New York, a coastal hamlet on the northern shore of Long Island, to perform at the State University of New York campus. It was the band's fifth trip to SUNY—their first coming in April, 1970, and the most recent had been the previous October 23rd. Certainly, much had changed for the ABB in those ensuing eleven months.

Their seminal live album, At Fillmore East, had sold over 500,000 copies, and Rolling Stone would soon run a full-length feature on the group—the entire country was becoming aware of the Allmans. Accordingly, September 19th marked the first time the band would be playing SUNY Stonybrook as a headlining act, and they would not disappoint. The crowd that day witnessed a band that was at the absolute height of spontaneous creativity, with music that ranged from loose, free-flowing jazz-like improvisation to whiskey-soaked blues, country swing to full blown rock—all of it delivered with a furious, right on the edge intensity. These guys truly played as they lived, and lived as they played.

With Duane Allman's searing slide and lead lines, the melodic brilliance of Dickey Betts, Berry Oakley playing bass like a third guitar, Gregg Allman's distinct vocals and soothing B-3, and the dual syncopated drumming of Jaimoe and Butch Trucks, them sum total of the Allman Brothers Band was greater than the considerable talents of its individual parts. Their playing was a highoctane, explosive blend of eclectic styles that made each show completely unique, despite the fact that by July, the band had settled on a setlist that they rarely deviated from.

The Allman Brothers might have played the same songs night after night, but they were never played the same way twice. "Statesboro Blues," "Don't Keep Me Wonderin', " "Trouble No More," "Done Somebody Wrong," "One Way Out," In Memory of Elizabeth Reed," "Midnight Rider," "Hot 'Lanta," "You Don't Love Me," "Stormy Monday," "Whipping Post," and "Revival" were the regular staples in their two hour sets, with "Mountain Jam," "Dreams," and "Hoochie Coochie Man" thrown in on occasion. In August, the Brothers had also started playing and refining a beautiful new country-rock composition by Dickey Betts entitled "Blue Sky," and by listening to the few tapes that still exist, one can literally hear the song develop and grow.

This was typical of the Allmans-they would work out new songs and arrangements in a live setting, in front of an audience, which added a sense of excitement and creativity to their gigs. Their September 19th appearance at Stonybrook captured the essence of the Allman Brothers Band in 1971—and so much more. As was common, the band played two shows that Sunday (remember the days of a matinee performance?), and this two CD release is a compilation of songs from both sets.

Disc One kicks off with the traditional show-opening "Statesboro Blues," which is followed by a wicked "Trouble No More." Before sliding into "Don't Keep Me Wonderin*," Duane tells the crowd, "We enjoyed it last year, we'll enjoy it this year, and we'll enjoy it next year, I'm sure," a statement that would go sadly unfulfilled. A sparse and lean "Done Somebody Wrong" wraps up the tunes included from the day's opening show, and as the Brothers hammer through "One Way Out," it is clear that they were well into the groove during the evening performance. "Blue Sky" is 11 minutes of stretching improvisational beauty, "Stormy Monday" is sultry and steamy, while "You Don't Love Me" is a 25 minute run and gun exchange between Duane and Dickey.

The second disc consists of two ttacks: "Dreams," which is Duane Allman's 18- minute opus to the limits of slide guitar playing, and a spacey, exotic "In Memory of Elizabeth Reed," where the band pushes the song to the very edge of its boundaries, appropriately wrapping up one of the most cteative days in ABB history. Five weeks later, while the band was back home in Macon, Georgia, 24 year old Duane Allman was killed in a motorcycle crash. His death on October 29th, 1971, cost rock music of one its greatest masters, while the Allman Brothers lost their founder and cornerstone.

Although they would carry on and actually achieve their greatest commercial success without Duane, Stonybrook 9/19/71 features the Allman Brothers Band at their musical zenith—before the circle was tragically broken. Enjoy, and play it loud.
by John Lynskey Hittin' the Note Magazine

This CD was compiled from three analog master 7 1/2" IPS 1/4" stereo reels. The live mix evolved from the first song & continued to improve as the set progressed. Great care was taken to improve the sonic quality of the first few tracks to achieve a pleasing audio experience.

The inherent shortcomings of 30 year old tape & the live concert setting may be noticeable to the listener. We hope the performance more than makes up for these flaws. 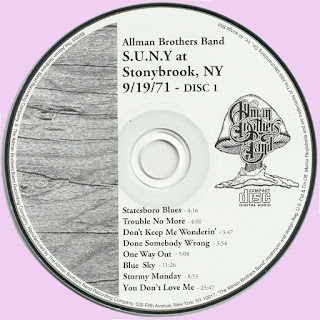 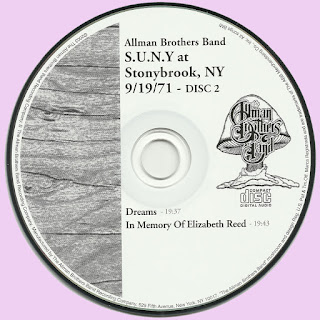 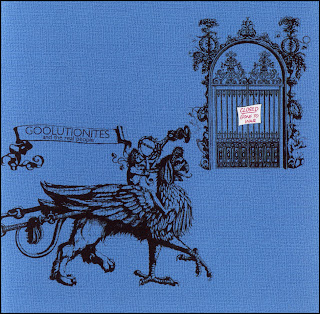 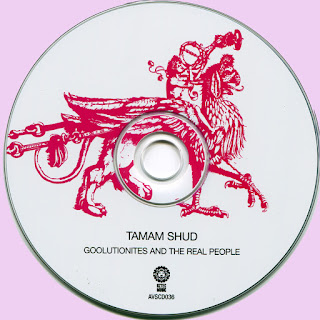 Free Text
Text Host
Posted by Marios at 4:57 AM 8 comments: