The Common People - Of The People/By The People/For The People From (1969 us, awesome garage psychedelic rock, fallout extra tracks edition) 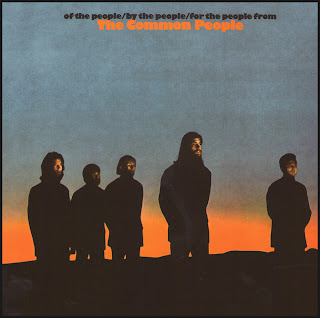 The Common People are perhaps the greatest remaining enigma in 1960s US rock music.

Their sole album has belatedly been acclaimed as one of the most distinctive recordings of its time, but - despite the best efforts of fans and journalists- none of the musicians involved has yet been found.

Led by Denny Robinett, who is remembered as a deeply charismatic figure, they are known to have originated in California (some say in Baldwin Park, others Fontana), where they are thought to have been bikers.

Having recorded two ultra-rare garage singles for the local Flodavieur label (which indicate the morose, brooding direction their music would take, and make their CD debut here), they fetched up on LA's famed Sunset Strip at the end of the decade.

By then they'd taken to wearing white robes and carrying Biblical staffs, and soon attracted the attention of legendary rock opportunist 'Sir' Tim Hudson, manager of garage heroes the Seeds and the Lollipop Shoppe.

Hudson had the prescience to recognise the uniqueness of Robinett's moody songwriting, and in 1969 he landed them an album deal with Capitol.

With a considerable budget to play with, he hired the legendary David Axelrod to score the material, and set about planning an ambitious fusion of the experimental pop of the Beach Boys, Love and The Velvet Underground with modern classical strings.

To this end he hired some of LA's top session musicians, several of whom were longtime Axel rod collaborators.

Cellist Jesse Ehrlich and violinist William Kurasch were both members of the Los Angeles Symphony Orchestra, and had recently contributed to albums including Love's Forever Changes and Frank Zappa's Lumpy Gravy, amongst others, while viola player Philip Goldberg was a veteran of sessions for Zappa, the Monkees, Van Dyke Parks and others.

Double bassist and tuba virtuoso Red Callender had played with jazz greats such as Louis Armstrong, Nat King Cole and Charlie Parker, while prolific trumpeter Tony Terran had contributed to recordings by Lou Rawls, Randy Newman and Linda Ronstadt, and went on to work with Tim Buckley, Tom Waits, Madonna and others. Rounding off the credits were engineers Rex Updegraft, Doc Siegel and Joe Polito, fresh from working with the Band, Buffalo Springfield and Glen Campbell respectively.

The stage seemed set for a masterpiece - but then disaster struck. With stunning work completed on just three songs, Axelrod's wife was badly injured in an accident and he had to pull out, effectively killing the project in the process.

Today those shimmering, ethereal masterpieces (Soon There'// Be Thunder, / Hove Been Alone and Those Who Love) are not only regarded as pinnacles of Axelrod's career, but of orchestrated pop in general - all the more remarkable given that they are said to have been recorded without charts.

Certainly their conductor, Sid Sharp (perhaps best-known for his work on the Beach Boys' Pet Sounds), regarded them as astonishing achievements.

One can only conjecture how magical the album would be had every track been thus treated, but Axelrod's departure gave Capitol cold feet, and they cut off their support, meaning that the remaining songs had to be rushed.

Though they're at odds with the opening trio, most are treasures too. Go Every Way, Why Must I Be?, Take From You, Feeling and Land Of A Day are all impeccable pop songs, delivered in Robinett's unique growl and imbued with the same wistful, suggestive atmosphere of the album's openers.

The record is only compromised by one or two less distinguished hornrock tracks, and Hudson's sole contribution, the wonderfully-titled but woefully-misbegotten novelty number They Didn't Even Go To The Funeral, a strong contender for the worst song ever to appear on a fine album.

When it crept out in late 1969, Of The People, By The People, For The People flopped, and it is assumed that the band folded soon afterwards.

The record, however, stands as a small masterpiece of brooding, late-night psychedelia, and it is to be hoped that Denny Robinett will surface one day, and tell the full story of his glorious, one-shot contribution to rock and roll.
Liner-Notes 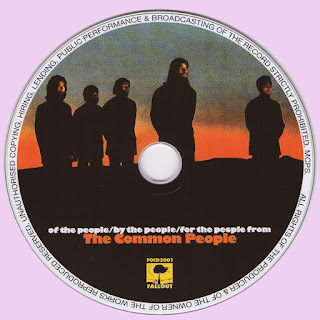