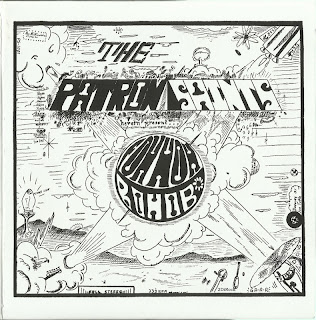 2006 marked the 40th anniversary of the birth of the Patron Saints. 40 years. How could it possibly be that long? Back in 1966, we were five typical mid-sixties suburban New York kids, learning our musical craft by emulating our heroes: the Stones, Beatles, Hendrix, Cream, the Butterfield Blues Band, the Doors, Moby Grape, the Yardbirds, et al, all loomed large in our rock ‘n’ roll education.

By early 1969, the Saints were down to three members: Jon Tuttle, Paul D'Alton and myself. Jon and I had just started writing songs at this point, so we finally had some original music to practice and perform. Eventually, we recorded some demos together, using guitars and piano just to see what they sounded like. When we felt we had enough compositions under our belts, we decided to record some of this new material with Paul on drums. I owned a Sony 10255 reel-to-reel tape deck and Jon had a portable Sony reel-to-reel system. These decks were not, by any stretch of the imagination, professional recording devices, but that didn't matter to us...we had gotten pretty good at squeezing respectable results out of less-than-state-of-the-art equipment by this time.

It was at this point that I began to act on an idea that had been gestating in my little teenage brain for some time...why do we need to go to a record company with our stuff? Why don't we just record our own album and put it out ourselves? Sort of like those old Andy Hardy movies..."Say, let's put on a show in the barn!!!" My philosophy was (and still is, for that matter) that the music and vibes on a record were far more important than the fidelity. Our friend and contemporary, Chris Kubie, had recorded a live concert of his music in January 1969 and put out a limited edition record, so we knew it could be done. Jon and Paul readily agreed to the scheme; so, now what? How much would it cost? What did we need? Where would we record this thing?

Fate intervened when the Paul's family decided that when they went away for three weeks in June of 1969, we could record at the house in their absence. I don't think they really had a clue what was involved, but it sounded positive and harmless, so why not? With our "studio" problem solved, we scrounged up some extra equipment; a Roberts //oX (as I recall) reel-to-reel tape deck similar to my Sony, but of higher quality, a high-impedance Shure microphone and a mixer with built-in reverb! We had it made now. We divided up the responsibilities into three distinct sections: I was to produce and engineer the album, Jon was to do the cover artwork and Paul was head of distribution (whatever that meant).

Bit by bit, we set up our creative turf; amplifiers were hooked up, mikes (all three or four of them) were placed, levels were checked. It took a whole day, but finally, on June 25,1969, we were ready to make our creative mark on the world. Song by song, we captured our repertoire. Jon and I had done enough recording in the past to know our way around the basics of the process, but not enough to know what "wasn't allowed," so we constantly broke the rules (i.e., mike placement, reverb levels, sound effects, etc.) without even being aware of it. I truly believe our innocent "ignorance" is what gave the record it's charm. We often stopped tape when loud planes went over, when dogs barked, when phones rang (if we forgot to take them off the hook, which was fairly often).

If you listen carefully to the fade out of "White Light", you can hear the birds chirping outside. Not exactly a soundproof environment. Somehow or other, by July isth, we had finished the tracks for what was to become Fohhoh Bohob. We packaged, pressed and delivered our masterpiece to a waiting world. Or so we thought. Since we could only afford to press 100 copies of the LP, there weren't that many to go around. Some went to family and friends, a few to record companies and radio DJs, and the rest to...well, apparently, they eventually found their way into the hands of fans and collectors who, in the ensuing years, have made Bohob one of the most collectible independently produced LPs ever released, with original copies commanding absurdly high prices. Who would have guessed? Which brings us to this new reissue.

To combat the number of sonically sub-par Bohob bootlegs which had appeared on the underground music scene over the years, we released a reissue LP and CD a decade ago, which were culled from original sources and processed to the best of our abilities using 1996-7 technology. Since that stock of reissue LPs/CDs is now virtually depleted, it seemed the right time to put out a new edition. Enter Nemo Bidstrup, owner and founder of Time-Lag Records, and, conveniently, a big fan of Fohhoh Bohob. Based on Nemo's urging, we decided to put out the ultimate Bohob reissues, with the LP being as close as possible to the original in terms of look, feel and sound (only infinitely better), and the CD with an additional four previously unavailable bonus tracks, for a total of sixteen.

This time, the transfer from the original master tapes (which, remarkably, still sound as good as they did back in '69) is a close to perfect as possible. For instance, the transfer of the song "Flower" on the first reissues used a de-clicked version from an original Bohob LP. The version used on the new reissues, however, is about 85% original master tape, 15% de-clicked version. The continued demand for Fohhoh Bohob is astonishing and truly heartening for the Patron Saints, who are still together in 2006 and releasing new music. It should also be an inspiration for bands offering their music to a difficult-to-break-through business, the lesson being, of course, "you just never know"! Grateful thanks to all of you who have loved this album enough to keep its spirit alive.
by Eric Bergman, October 2006 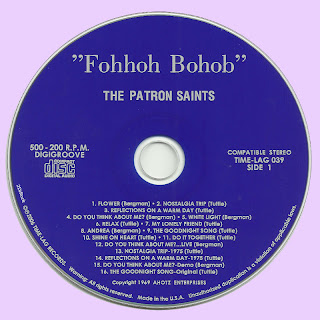