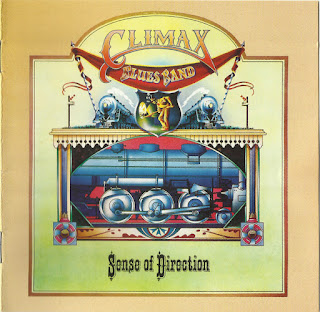 On their 1974 studio album, Sense of Direction, Pete Haycock (guitars, vocals), Colin Cooper (sax, flute, clarinet, vocals, rhythm guitar), Derek Holt (bass, vocals, rhythm guitar, keyboards), and John Cuffley (drums) wrote a bunch of songs that seemed to distance themselves from the more Chicago blues flavored material they had come up with previously, a trend that actually started on 1972's Rich Man album and continued more and more with each successive record.

Opener "Amerita/Sense of Direction" combined not only some fiery blues, but also hard rock & jazz fusion, as Haycock's guitar and Cooper's sax blast off into a complex, unison burst of energy over tricky rhythms, then settle into an dreamy atmospheric section that segues into the slide guitar blues of "Losin' the Humbles". Cooper's laid back vocal drives the alluring blues/pop of "Shopping Bag People", another piece filled with Haycock's tasty slide guitar solos, while "Nogales" is catchy rock 'n' roll, not unlike what the Steve Miller Band was creating right around the same time. Haycock's shimmering lead guitar lines introduce "Reaching Out", a funky, jazzy rocker with great vocals, tight rhythms, smoky sax, and crisp guitar work. "Right Now" is a smoldering blues number, led by Haycock's stinging guitar lines and Cooper's lazy vocals & smoky horns. The album reaches its climax with the groove laden hard rocker "Before You Reach the Grave" and the rootsy, bluesy, almost Grateful Dead sounding " Milwaukee Truckin' Blues (Chipper's Song)".

As with all the other Esoteric/Cherry Red reissues, Sense of Direction features remastered sound (well done as always), and a selection of bonus tracks, of which the BBC Radio One tracks are the highlights. The booklet here is filled with photos and a nice long essay from Malcolm Dome, who talks about the bands history and the album itself. With the death of Colin Cooper a few years ago and Pete Haycock just days ago, all these Climax Blues Band reissues couldn't have come at a better time. If your only memory of this band is "Couldn't Get it Right", trust me, you need to explore them further.
by Pete Pardo 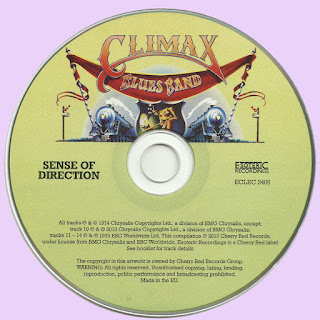