Rex Holman – Here In The Land Of Victory (1970 us, tremendous folk psych) 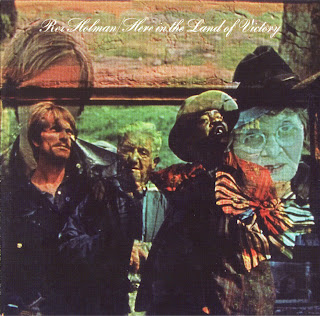 Actor Rex Holman is perhaps better-known to Star Trek and Monkees fans than music enthusiasts, but connoisseurs of acid folk have long treasured this, his sole album, which originally appeared in 1970 (when he was almost 42 years old). A hypnotic blend of melodic, contemplative songs (set to acoustic guitar, sitar and tabla) and philosophical lyrics sung in a quavering voice that has been compared to Tim Buckley’s, it’s nothing short of an overlooked gem, and is sure to appeal to fans of artists such as Damon, Pat Kilroy and Mark Fry.

Released in 1970 (when Holman was already 42), "Here In the Land of Victory" featured all original material, though the mix of  Indian-flavored instrumentation and Holman's hyper serious lyrics sounded like something that was recorded circa 1967.  Holman's vibrato-drenched vocals (which were an acquired taste) and his over-the-top lyrics certainly weren't for everyone.  Imagine Richard Harris reincarnated as Donovan and you'll have a feel for tracks like 'Listen To the Footsteps', the sitar and flute propelled 'Sit and Flatter Me' and 'Come On Down'.  Ironically if you could get over those characteristics, then the album rewarded you with quite a bit of memorable material.

Holman's uber earnestness was somehow charming and most of the lyrics were no worse than your standard college English paper (okay, 'The Chosen One' was far worse).  Certainly a reflection of my personal tastes, but Holman was at his best when backed by a full rock ensemble.  As such personal highlights included 'Pink Lemonade', 'Today Is Almost Here', and the bluesy 'Red Is the Apple'.   The disturbing artwork including a back cover photo of Homan sitting blissed out next to a passed out drunk certainly didn't help sales.  (The inner sleeve picture showing Holman in his best psycho-killer stare is even more disturbing.)
Bad-cat 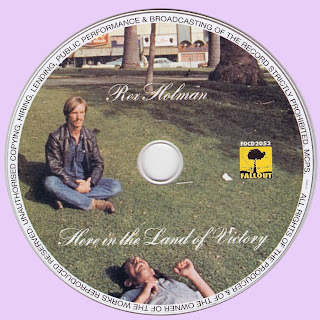