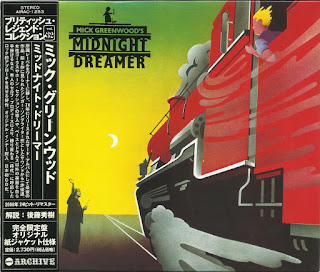 Mick returned to the UK, and more touring with bands like Soft Machine and Curved Air, and performing at the Hammersmith Odeon with Jose Feliciano. The band underwent further changes with the addition of drummer Alan Eden and ex-John Mayall guitarist, Roger Dean. Mick then spent a little time away with an ancient tribe of musicians called Jajouka in the Moroccan mountains, visited previously by Brian Jones of the Rolling Stones and Ornett Coleman, before writing material for his third album, Midnight Dreamer.

Through a chain of events, Greenwood became involved with the same record company and management as Fleetwood Mac, was inadvertently caught up in the political and legal wars of their separation, as witnessed by the tabloid coverage of the Old Bailey case. Even though the album was recognised, sadly the launch of Midnight Dreamer suffered as a result.
Mick Greenwood

What other talents does Mick Greenwood have up his sleeve? Not only does this album contain sensitive well written songs from across the spectrum, delivered  and performed with authority by himself and a host of top musos, but Mick has also produced with his engineer a rock solid piece of product with soul. Midnight Dreamer is a great third album by this guy. Highly recommended.
by Jonathon Teller, PlayTime Review 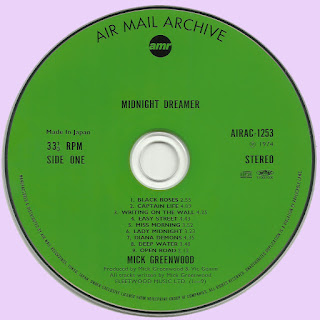 Free Text
Just Paste
Posted by Marios at 4:41 AM 6 comments: