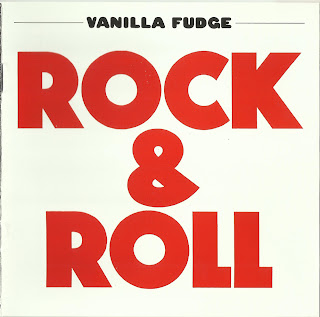 Vanilla Fudge started focusing more on their European exposure in 1969. Unfortunately, I don't have the many European itineraries from that year yet. Certainly the band was more popular in Europe and Australia than they ever were on the West Coast. In Italy the Fudge became the first Rock & Roll band to ever win the coveted Golden Gondola Award for their vocals at the Venice festival.

On February 2, 1969, the Fudge performed Shotgun live on the Ed Sullivan show. The band would also appear on other TV shows like the Beat Club and Dick Cavett throughout '69. The day following the Ed Sullivan appearance (Feb. 3), ATCO released Shotgun as a single with the original hard rockin' Good Good Lovin' on the B-Side.

On February 5th, ATCO released the classic 60's LP: Near the Beginning. It was the only Fudge LP produced by the band alone and the first LP without Shadow Morton. It boasted some of the most lovely symphonic and vocal arrangements the Fudge would ever record and the entire second side was the bone crunching Break Song, recorded live at the Shriner's Auditorium in Los Angeles. In just those four songs from that album, Vanilla Fudge successfully distilled all that was good, inspired and noble about the 60's era.

A helpful thought or Tangential Segue: "What is in opposition is in concert, and from what differs comes the most beautiful harmony." Heraclitus of Ephesus, circa 500 BC.

Near the Beginning was devoid of the black cynicism found on the Who's Tommy or the pessimism of Creedance Clearwater Revival's 1969 efforts. Nor did it pander to the political posturing of Jefferson Airplane's Volunteers or Cream's Farewell self indulgences. Where Led Zeppelin only had raw steel, Near the Beginning also had the astonishingly arranged Some Velvet Morning - a combination that would not be lost on Led Zeppelin and Deep Purple. The musical symmetry of the Fudge album was almost schizophrenic, and hence captured the fullest essence of those times. Psychedelia had given way to madness and overindulgence by 1969. Vanilla Fudge were one of the few bands who were still able to focus on the aesthetic and artistic mysteries which could combine both velvet and steel in an opus of obscure contrasts and uncanny harmonies.

Another US concert tour followed including: Feb 7th and 8th, Vanilla Fudge headlined on a bill that included Led Zeppelin and Jethro Tull at the Kinetic Playground in Chicago.

Another ATCO single: Some Velvet Morning was remixed as a single from the LP and released on the 29th of April. More European dates followed (I think. More to be added as I get them.).

On June 6th and 7th the Vanilla Fudge headlined another show at Chicago's Kinetic Playground. On June 20th, the Fudge appeared at the Newport '69 Festival in San Bernadino, Ca. The bill included Joe Cocker and Buddy Miles.

The Fudge performed at the Denver Pops Festival in Mile High Stadium which was held on the 27-29th of June.

Another ATCO single, Need Love was released on the 22nd of July. It was an original song off their forthcoming fifth LP that the band was still recording with producer Adrian Barber.

Three days later Vanilla Fudge were checked into the Edgewater Inn in Seattle with Led Zeppelin. Both bands had come to play at the Seattle Pops Festival scheduled for July 25-27th, at Woodenville, Washington.

Richard Cole, the Zeppelin Road Manager, identified a young woman named Jackie from Oregon in his book. He described her as tall, red headed, and sexually adventurous. Carmine Appice admitted in a radio interview that he was the one who brought Jackie up to the room which Richard Cole identified in his book as #242 at the Edgewater Inn. Notwithstanding Frank Zappa's song about the Mud Shark, Cole insisted that the whole affair involved a Red Snapper fish wielded by him and John Bonham, some rope from the Hotels front desk, and Mark Stein's 8mm camera. The rest is pure speculation.

Asked about the event in 1997, Vince Martell said: "Yeah, that was after one of the gigs we did up in that area... uh... Chicago, right? Oh this was Seattle, yeah, well, there were a couple of things going on in a few places. {laughs} It just basically came down to one of these crazy parties that Rock bands like to get into... indulging... and with female companions, and you end up with, you know, how crazy can everybody go?' And that went pretty crazy."

The summer was the beginning of the end for the Fudge. Sometime during it they recorded two versions of a Coca-Cola radio commercial with Jeff Beck, while Martell was sick in bed. Tim & Carmine wanted to form a "Cream" type band with Jeff Beck. During the fall's European tours, Vanilla Fudge decided to end the "magic".

Mark Stein, looking at why the Vanilla Fudge eventually broke up, told Keyboard Magazine in 1983: "... bands that featured soloists, That was the coming thing. We toured with Cream, and Carmine decided he wanted to be Ginger Baker, with a lot of drum solo's. Tim Bogert wanted to be Jack Bruce. We were being influenced in that direction, so we lost the team effort. That really started in late '68 and '69."

In 1997, with far more hindsight, Martell gave his own views on the band's breakup. In the Web Site interview conducted by Mr. Aaron Butler, Vince said: "We broke up because we had been together so much in the years of "67 to '70, that we had only two 2-week periods off. The rest of the time we were always going, we'd only have a couple of days here and there. After a couple of days off we would get back together on the way to the airport and everybody had things to say, but by the time we hit the airport nobody was talking. We had talked the old stuff out so much, and now we just finished talking the new stuff,,, that's kind of what did it... We were in Italy when we decided that when we came back to the States, we'd call it quits. And I was looking for the time off, so it was fine with me."

On the 3rd night of the Palm Beach Festival in Florida (Thanksgiving Weekend), Vanilla Fudge performed with Johnny Winter's Band and Janis Joplin's Full Tilt Boogie Band. After the Joplin set, Janis called for a jam between the bands which went on for some time as the musicians traded palaces. That night Mark Stein and Carmine Appice backed Janis Joplin and Edgar Winter on sax. Vince Martell and Tim Bogert traded riffs with Johnny Winter... magical stuff to the very end...

Another remote tangent: The Fudge's music sought out the obscure through the 'harmonious wholes' of alternative & unfamiliar musical arrangements and 'patterns'. Previously 'unknown' forms of musical sounds, scales and arrangements applied to familiar themes thus revealed the 'unkown forms' lurking at the edge of all obscure & popular musical works. These 'unknown forms' proved immense, encompassing the 'greater mysteries', because what is 'unkown' is that which is 'unformed' and therein the 'unknown musical forms' create their own reality calling out to those who in turn performed or listened to it. Thus the unknown knew the 'known' and both gave life to one another at that ancient primal well William Blake called 'divine creativity'.(pax). 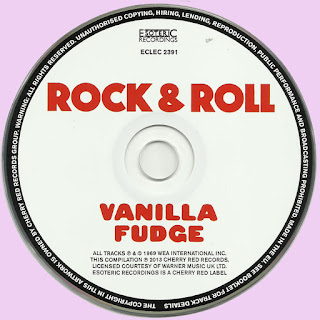