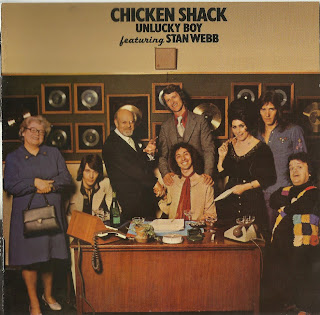 Originally released in 1973, but reissued recently through Esoteric label, Chicken Shack's Unlucky Boy finds guitarist/vocalist/songwriter and band founder Stan Webb in fine form. Only drummer Paul Hancox remains from the Imagination Lady, and indeed the horn-oriented approach here is much different than the plodding Led Zeppelin-isms of the previous disc.

Webb contributes six originals, and even though they are derivative of Savoy Brown (a band he joined for the Boogie Brothers album just a year later), his approach here is much more subtle and controlled than on his last effort. Chris Mercer's saxes, often double tracked to sound like a horn section, bring a tough R&B to the mix, and drummer Hancox is a controlled powerhouse. Webb also reigns in his impulse to overextend guitar solos so prevalent on Imagination Lady, whipping off tight, controlled leads instead.

Producer Neil Slaven contributes honest, witty, and often self-deprecating liner notes that help explain why two of these songs suffer from poor mixes (basically, he had consumed various substances and couldn't salvage the songs after the fact). Strings on "As Time Goes Passing By," (also included in a shorter single version) are a nice touch and bring a bit of class to the proceedings while maintaining the R&B slant of the disc. Two unedited studio jams make the cut as "Stan the Man" and the seven-minute "Jammin' with the Ash," both featuring pianist Tony Ashton, who really lets loose on the latter.

Things get stripped down for an unusually delicate version of Lonnie Johnson's "Too Late to Cry" with just strummed guitar and bass. The opening trio of Webb-penned tunes shows some of his best songwriting with the instrumental "Prudence's Party" a terrific capsule of Webb's stinging, gritty guitar style. The album sounds dated but harkens back to a particular time in British blues that is charming in its anything goes attitude. That helps make this one of Stan Webb's more consistent and successful offerings.
by Hal Horowitz 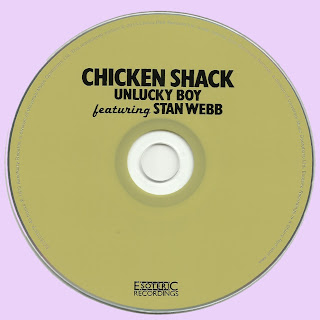 Free Text
Text Host
Posted by Marios at 11:08 AM 4 comments: