Lisa Miller - Within Myself (1968 us, a vital missing piece to the great jigsaw puzzle of psych pop, 2010 remaster) 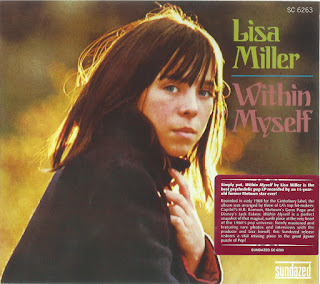 There's some sort of pop culture Rorschach test to be constructed around the question of whether a fan of esoteric '60s pop records would be intrigued or thoroughly repelled by the notion of an album of polished pop songs, with overtones of psychedelia and sunshine pop and starring a vocalist who was all of 11 years old when she did the recording sessions. But Lisa Miller wasn't an ordinary child entertainer; she cut some sides for Motown's VIP subsidiary when she was only eight, and by the time she turned 15, she was the voice of Mary Magdalene on the original recording of the Christian rock opera Truth of Truths (interesting casting, that).

Miller's first album, 1967's Within Myself, is a surprisingly solid and ambitious album from a performer of such a tender age; Miller had a strong, rich voice and sang with a confidence and technique that would be the envy of many artists three times her age. Truth to tell, Within Myself hardly sounds like the work of a little girl, and the slightly gimmicky arrangements on songs like "Mechanical Man" and "Fool on the Hill" (the latter Beatles' cover featuring a truly egregious Moog synthesizer) seem to add a novelty element to the reminder that we're listening to an 11-year-old kid, as songs like "I'll Hit a Lucky Streak" (in which she imagines what dating boys will be like) or "Be Like A Little Child" make clear. Within Myself was produced by Kay Lewis and Helen Lewis (respectively, Lisa's mother and aunt), who also wrote most of the songs, and though a significant share of the material and the arrangements could be politely described as dated (and who suggested that an 11-year-old should cover "White Rabbit"?), the studio band is bold and dynamic on all tracks and Miller's vocals more than keep up with them.

Canterbury Records, who financed the sessions and released Within Myself, went out of business within a few weeks of the album's release, and the majority of the small press run were used as promotional copies; it's hard to imagine how the album would have fared in the marketplace, given how mature and assured it sounds despite the artist's youth, but fans of vintage pop will find this a fascinating curio from a vocalist who didn't need the gimmick factor of her age to impress a listener.
by Mark Deming 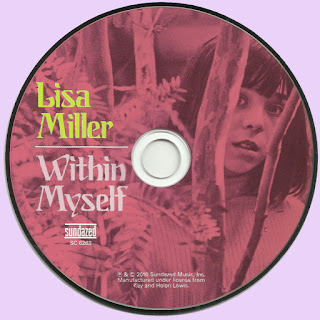 Free Text
Just Paste
Posted by Marios at 9:37 AM 11 comments: