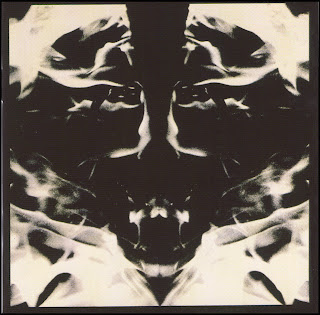 When Mott the Hoople went into the recording studio to record this, their second album, it was known as Sticky Fingers. The front sleeve was already complete and featured an outsize Frankenstein's monster driving a dragster through the night. But Mott had reckoned without their producer Guy Stevens getting friendly with the Rolling Stones, who were next door mixing their new album for impending release. Hearing the title of Mott's new album, Mick'n'Keef promptly nicked it off them. And so it was that Mott's second LP had to be retitled Mad Shadows, a title originally chosen for the projected Steve Winwood solo album which was soon to become Traffic's come-back LP John Barleycorn Must Die. Confused? Well, you always would be when Guy Stevens was involved. And Mott could hardly complain, especially as Guy had got Mott together in the first place.

In 1969, Stevens had been looking for a cross between the Stones and the Band with an English Bob Dylan at the helm. So he took a young going-nowhere Hereford band called Silence and lumbered them with a new front man - a pianist/vocalist called Ian Hunter, a guy in his 30s who'd played bass in the New Yardbirds and had been a staff songwriter in London's tin pan alley. The first album had been cobbled together in late 1969, without Stevens knowing that Ian Hunter had never really been a pianist at all and could only play the chords G, C and D; all in a hugely kack-handed fashion. So, by the time of recording this second LP, Hunter's place in the group was in no way secure, and their guitarist Mick Ralphs was being pushed by Guy Stevens as the possible replacement frontman.

Side one of the first Mott LP had been a mish-mash of styles and experiments, but side two had produced just what Guy Stevens was looking for. It was a classic rock'n'roll work which ran from the uber-Stones riffing of "Rock and Roll Queen" to the Dylan overload of the eleven-minute "Half Moon Bay", with medleys of simple but blazing emotion linking each statement together. It was gorgeous in an emotional slegdehammer-y kind of way.

But this second LP, Mad Shadows, was to be Mott's greatest statement of all and a true cry from the heart for Ian Hunter. His wife had taken his children and returned to Shrewsbury, telling him that she would not accept his new longhair and new lifestyle, and the whole album resounds with Hunter's wailing and fist-pounding as the ghosts of his still recent former life spill over into every song. The sledgehammer attitude of the first album is, if anything, overtaken by the brutality of musical execution of Mad Shadows.

Indeed, what makes Mad Shadows so powerful is the brazen way in which the other much younger musicians interpret Hunter's work. Simple to the point of repetition because of his ultra-limited piano playing, Hunter's songs actually gain from this flash, virtually punk energy which the rest of the band bring, and his desperate cry from the heart of a dissolving 30-something marriage is gloriously mis-translated by rampant musical interpreters barely out of their teens. Throughout the LP, Overend Watts' bass is far more reminiscent of Bill Wyman's storming work on "Have You Seen Your Mother Baby", than Rick Danko of the Band or any equivalently subtle American musician. Buffin's drums are proto-flash to the point of bluster, and were thoroughly ripped off by Cheap Trick's Bun E. Carlos to later drive a far more brash kind of music.

Verden Allen's overdriven Hammond organ cranks out the same old riff song after song, even resorting to that dreadful Bar Mitzvah lick from "Like a Rolling Stone", but never does Guy Stevens scream 'Enough!' He just lets them get on and on with it, and often on songs of six and seven minutes in length. It is this suffocatingly, axe-wieldingly sentimental glue which fixes the entire album together, and the freedom was given to the band by Guy Stevens. Crediting himself with 'spiritual percussion and psychic piano', Guy Stevens is an awesome presence on Mad Shadows - not for what he contributes but for the space he allows them all to fill. Mott the Hoople may have made their name with a David Bowie song, but it was Stevens who created them, and he who created this LP. For Mad Shadows is their masterpiece.

This huge emotional reverberator drop kicks into life with the frantic five minutes of "Thunderbuck Ram", in which Mick Ralphs' raucous guitar riffs ring out across a Cheddar Gorge of chasmic reverb. The proto-Paranoid riff propells them all into the chorus with such venom that Guy Stevens' record-this-live-at-all-costs mode is immediately confronted and challenged head-on by huge glaring errors, as minors and majors clash and buzz. Yet the song thunders on relentlessly, until the tail-out becomes a huge one chord burn-out and the first of Ian Hunter's Velvets-meets-Jerry Lee Lewis high velocity piano attacks kicks in like cooking amphetamines into a hot curry.

Verden Allen's monolithic Hammond organ introduces the massive six minutes of "No Wheels to Ride", as Ian Hunter grinds his teeth and pounds the piano in grief, the memories of his children so recently taken from his life manifesting in a gargantuan emotional haemorrhage, as the band behind him try desperately to upstage him. "Can't get enough, can't get enough, can't get enough of your love," he howls over and over and over until even Mick Ralphs jots down the hookline (for later use). Then it's off into another huge and simple three chord emotional Hammond organ and pounding piano blow-out, like some kind of Spectorized proto-punk gross out. It's fair to remind ourselves at this moment that Guy Stevens once claimed: "There are only two Phil Spectors … and I'm one of them!" Indeed, In-fucking-deedio!

Following close behind on the coattails of "No Wheels to Ride", "You are one of us" is virtually the same song with the same frantic emotion and the same 'Hang on Sloopy" chord sequence, while Hunter screams about how he 'wants to thank everyone' and the band return to their single-minded intention of upstaging each other. Apparently, Hunter wants to THANK the band for letting him stay IN the band, while they accompany him as though they think he's already left.

And when they finish side one with "Walking with a Mountain", Mott is a Foden truck with the intentions of a Cadillac. Brutal, brash and totally without finesse, the bass and piano threaten to drive the whole tune into a lake at any moment, while Buffin's totally overachieving ideas of drumming are matched only by his inability to achieve any of it. Startling upstart rock'n'roll this is indeed and their producer Guy Stevens would have made the worst politician ever. He can't even be bothered to do a cover-up of thee most glaring errors. No wonder Mott's labelmates Traffic would later disparagingly allude to Mott's flash and bluster in their album title The Low Spark of High Heeled Boys.

But subtlety was the last thing Stevens was searching for here, which is good because he would have been more than disappointed. Instead, he opted for huge Viking emotions and Neanderthal gestures. Side two begins with the sentimental and monumentally real seven-minute last-waltz of "I Can Feel". I say 'real' because it is both dopey and refreshing at the same time. The most mawkish female singers this side of Joe Cocker's "With a Little Help From my Friends" coo and placate Hunter as he stands knee deep in pain and self-pity. Huge descending piano and organ chords swoop gratuitously as lumpen melody bass and ernie-ernie guitars squeeze out huge obvious solos from their wrung-necks. Only opera dares to be more brutal than Mott the Hoople when describing sad emotions.

Then it's off to the rodeo for "Threads of Iron" with its C&W rhythm and good time melody and cliched lyrics, until Mick Ralphs reminds us all that 'You are what you are' and the whole group bludgeon some poor old blues riff until it becomes subsumed into their standard two-chord thrash out, and we're off again into pounding and huge Albert Hall-sized Jerry Lee Lewis piano and that fucking merciless punk rock bass that wants to be a lead guitar played on telegraph wires. Of course, the whole thing disintegrates into utter painful chaos. Crash, bash, wallop. Oh, and then some more wallop.

Then we're down and down and downer still … to the very last song on the album. Legend has it that Guy Stevens switched the tape on for "When My Mind's Gone" without letting Ian Hunter write lyrics, telling him that whatever he sung would be the last track on the LP, so he'd better make it good. Stevens told the press that he'd hypnotised Hunter and sat at the other end of the piano staring the song into Hunter's eyes. If it's the truth, then Ian Hunter was a human sponge for emotion and instant song-writing. If, as Hunter later claimed, he was touching cloth and made it all up at the drop of a hat, then he's still a genius. Whatever, for "When My Mind's Gone", the standard three chords got wheeled out by Hunter, who proceeded to hammer his muse for all it was worth.

"What once was true is now untrue … what once was clean is now unclean … what once was safe is now … unsafe." Does it cut it, damn right it does. It is magnificent and tragic and funny and the best thing on the LP. Only Verden Allen dares play along with any confidence, while the rest of the band hesitate and splutter in the background for the whole six and a half minutes. And Mott prove themselves with their one great album; an album so flawed that it makes the Faces look tight and cover versions of Vanilla Fudge seem subtle.

Mad Shadows takes its name from a poem by Baudelaire, which Guy Stevens reproduced on the back of the gatefold sleeve. It includes such lines as: "Descend the way that leads to hell infernal, Plunge in a deep gulf where crime's inevitable." So we must presume from this evidence that, if Ian Hunter was really Pinocchio to Guy Stevens' Gepetto at this time, Mad Shadows is a brilliantly unhinged example of an albeit briefly, but nevertheless perfectly balanced rock'n'roll symbiosis.
Head-Heritage 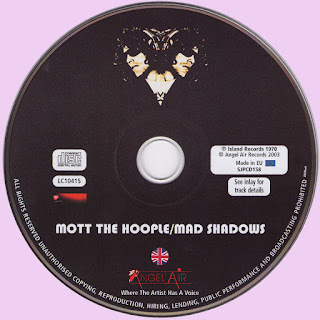