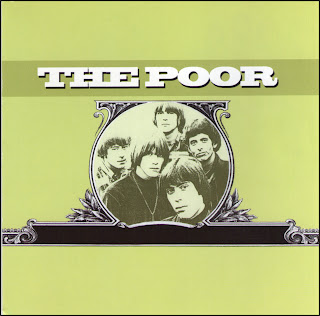 The Poor are just another chapter in the amazing unfolding story of LA mid to late 60s pop, folk and fuzz, and thanks to the fine fellows at Rev-Ola, this lovingly compiled disc has been assembled from their singles and unreleased demo recordings. Named The Poor (previously known as The Soul Survivors when they lived in Colorado) because they really were poor, they were hired by people like Curt Boettcher (thanks to fellow Millennium pal Joey Stec) to play on sessions by the likes of Tommy Roe and The Association. They also were swallowed up by a scam which kept them poor by getting mixed up with a manager who got them to record for various label one-offs so the manager could then get the advances from each label.

Jim Bell (of the pre-Millennium group, The Ballroom), Randy Meisner (who went onto the Stone Canyon Band, Poco, and The Eagles, respectively and who also played on The Millennium demos), and Randy Naylor (he co-wrote the Sagittarius tune Love's Fatal Way with Curt B. which was originally demo'd by The Poor but is sadly not included herein; assumedly lost - Randy also went on the record an album produced by Joey Stec called Twin Engine) were all in The Poor. They rocked the Sunset Strip with a vital folk rock sound which is an amazing mix of Mamas and Papas, Monkees, The Sunshine Company, and Bobby Jameson (another Boettcher boy) along with certain country rock outfits which were stewing at the time like Cashman, Pistilli, and West and Brewer & Shipley.

A crack band, captured precisely and perfectly in the studio, these 13 tracks are all stellar lost gems. There's a great fuzz rock vibe throughout which helps even some of the more mellow tunes rock, with amazing harmonies rising throughout. Even when they get really mellow, there's lounge pop feel and harmony vocals which add to the mix reminiscent of The Ballroom and Sagittarius.

The Poor recorded two songs written by Brewer & Shipley (before they worked together as a duo), and She's Got The Time (She's Got The Changes) (penned by Tom Shipley) is by far the best tune on the disc. It's got a pounding folk rock song about "a young thing" which reminds me of Cashman, Pistilli, and West or The Monkees. The second best song is Study In Motion #1, the psych pop piece which rounds out the disc and was used in the Stu Phillips produced soundtrack to the 1967 Jack Nicholson movie Hell's Angels On Wheels. This song reminds me of the oft overlooked psych pop gem The Smoke (the Michael Lloyd project and not the British group); it's just a shame the song is a mere minute and thirty eight seconds.

Other great tunes are the first track on the disc, Can't Stand To Be In Love With You, a sentiment I'm sure we've all felt at one time or another. This is a driving fuzzed out harmony rocker. Once Again is a dreamy folk rock tune which'll make you melt with it's slow Stones-like melody and swaying build-up style. A fun tune is the vaudeville sounding tune Love Is Real which reminds me of The Monkees' tune Tapioca Tundra.

Rev-Ola have a way of delving into the vaults and digging out these treasures of immeasurable wealth. The Poor have apparently been a best kept secret because I had not heard about them until this cd dropped from the sky. The Poor disc is another in a long line of jaw-dropping gems to grace the cd shelves of lost rock, folk and harmony pop that Rev-Ola have been re-releasing at a blinding speed, and is so sorely needed in this age of a mechanical loss.
by Patrick 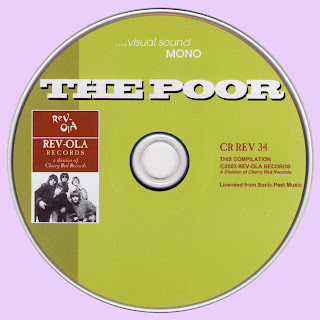 Free Text
The Free Text
Posted by Marios at 10:05 AM 5 comments: