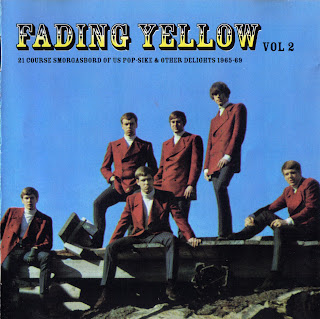 Fading Yellow Volume Two starts out with the creepy sounding folk rock of Disraeli's What Will The New Day Bring which has also been recently compiled on the Storm in the Garage box set on Akarma.

The July Four bring us the more upbeat Frightened Little Girl which was covered by The Happy Balloon on the Siesta compilation Sombrero, a song that was not on The Fine Art Of Ballooning. A spiritual obscurity from the sixties if there ever was one and definitely worth the covering - or listening in its original form which appeared on a Cameo/Parkway 45 in 1967. The July Four also released this song in an instrumental version called Mr. Miff as the B-side to Frightened Little Girl which would be interesting to hear.

I'll Take it Back by Calliope has a similar unearthly harmony trend that we heard on the recordings by Curt Boettcher's Ballroom group or early Jefferson Airplane.

George Edwards original pre-HP Lovecraft tune Never Mind, I'm Freezing which is featured here and that was originally issued on Dunwich, much preferring his cover of The Beatles' Norwegian Wood. There are some guitar strums which sound C86 inspired.

I really enjoyed the anthemic folk rock of The Poor and two Poor songs are featured here including How Many Tears and Come Back Baby.

Curt Boettcher and Keith Olsen released the amazing Don´t Say Now as the b-side to The Night We Fell in Love (released as The Oracle) in 1967. It's a shame that Curt Boettcher's side projects have not been compiled on a legitimate compilation because they keep coming up here and there and astound everytime.

The Holy Mackerel were an early Paul Williams' band. I have yet to hear a full album by them, but thanks to compilations like the recently released Come To The Sunshine and this one, I can hear select tracks by this Richard Perry production called Scorpio Red. Paul Williams also helped c-write the masterful Peppermint Trolley Co. tune Trust with Roger Nichols. Sadly, Trust has yet to appear on a legit compilation, so every version I've heard (including the original vinyl copy) has that surface noise which plagues so much 1960s music. So please someone reissue The Holy Mackerel and Peppermint Trolley Co. albums soon!

The Higher Elevation's tune The Summer Skies was a project of Tim Gilbert, the writing partner of John Carter from the Strawberry Alarm Clock's Incense and Peppermints - they also released an LP as The Rainy Daze. The Summer Skies is a breezy garage pop gem that is about love in the summertime - the best time of year.

Chris and Craig were Chris Ducey and Craig Smith before they worked with The Monkee's Mike Nesmith as The Penny Arkade. Craig Smith wrote a handful of tunes for the likes of Andy Williams, Glen Campbell and the Monkees before he became known as Maitreya Kali and released two of the weirder self released albums (Apache and Inca) from the 1960s and early 1970s. Oddly, his albums included some of the Penny Arkade Not the Freeze tunes along with solo odds and ends.

Chris Ducey (not Bobby Jameson, who recorded an album with Chris Ducey's song titles *only* under the name Chris Ducey/Chris Lucey without the real Chris Ducey's involvement) ended up later working with Chad of Chad and Jeremy.

The early Chris and Craig single from 1966 included Isha (included here) and I Need You and has an interesting middle eastern feel mixed with some mad harpsichord and harmony vocals to it which preceded both The Monkees and Maitreya Kali middle eastern sitar sounds. It sounds like a tune that would've been unearthed by some 80s band like The Primitives or The Bangles.

The Backseat's Where Is Mary sounds like a chant that would've appeared in Willy Wonka or The Wizard of Oz movies. Larry Tamblyn from The Standells set this Utah group up with what must be some sort of veiled reference to drugs.

Not much is known about The Reign but their Sea Of Dreams has a jazzy and upbeat feel to it which makes me think it might be from New England. It almost sounds like it was taken from a private reel tape too and not a 45 but what do I know. Nice soulful fuzzed out break midway through.

And finally, a mystery instrumental Bonus Track is included to close out this volume of Fading Yellow which has a nice chiming strummed guitar bit to it and shimmering soloing which reminds me of the 1980s British movement of bands like Felt. I'm not sure why it must remain a mystery, but it's certainly a gem.
By Patrick (Gullbuy) 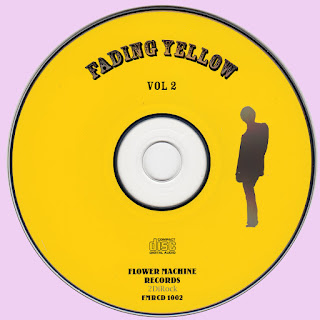