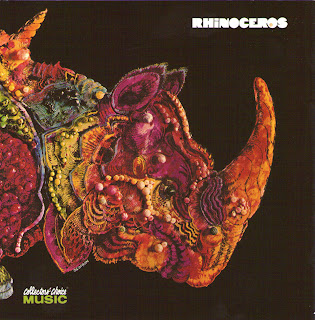 "It's September 1967 in Los Angeles. The optimism of the psychedelic music revolution was the unifying force in the world. The Monterey International Pop Festival had happened; The Beatles, Sergeant Pepper was not only a musical event but a sociological and cultural one as well. Despite the Vietnam War, the world was for one shining moment on the same page. Elektra Records (formerly a boutique folk music label) had successfully brought electric rock & roll to its roster, first with the Butterfield Blues Band, and then in quick succession, LA. Heroes Love and, of course, The Doors (the last two were re a dying for release Forever Changes and Strange Days, two seminal albums of the era).

The late Paul Rothchild produced all of these acts. He seemed to have the Midas touch, and despite some fumbles with bands, such as Clear Light, he obviously h|d his finger on the pulse of the music and the movement. Skipping back six months to early 1967 Frazier Mohawk (formerly known as Barry Friedman) approached Rothchild with a concept to collect some of the finest musicians in Los Angeles who weren't encumbered by bands into one group destined to blow the music world away. He even had a name for the band: Supergroup. Friedman/Mohawk already had impeccable credibility in helping assemble bands, particularly Buffalo Springfield, whom he nurtured in early 1966 before being aced but of the official management position by the nefarious team of Greene & Stone.

The overall concept is not that different from another band that would surface a year later from the U.K.: Led Zeppelin. The first assemblage of musicians at Rothchild & Friedman's Laurel Canyon home that September included guitarist Doug Hastings (formerly of Seatl’s “Daily Flash”, and also a temporary replacement for the errant Neil Young in the Springfield earlier that summer) and Chicago born and bred singer/ songwriter/ pianist Alan Gerber, both of whom made the final cut. Also in attendance were guitarist Danny Kortchmar former Kingsmen and Gentle soul bassist Kenny Magness among others.

During a brief hiatus in November, Rothchild took a trip to New York and recruited bassist Peter Hodgson and lead singer John Finley from the legendary Canadian R&B band, Jon & Lee and the Cliekmates. Rothchild had seen The Checkmates on one f his Elektra scouting trips back in late 1965. Rothchild returned to Los Angeles to continue assembling the band, followed in quick succession by Finley and Hodgson. Another addition during this period was former Iron Butterfly guitarist Danny Weis, who had just been recommended by his friend David Crosby to possibly join Al Kooper's Blood, Sweat & Tears, an offer he declined. Around the same time that Weis joined, the project saw the addition of yet another former Jon & Lee and the Checkmates member, classically trained keyboard player Michael Fontara. In late 1967, Weis introduced bassist Jerry Penrod, who at this point replaced Hodgson.

During late 1967, while the Canadians in the band scrambled to obtain work visas, the band as it were got a wonderful shakedown gig, backing singer/songwriter David Ackles for his exquisite Elektra debut album. The final addition to the band during this period was drummer Billy Mundi, who had previously played with Frank Zappa & the Mothers Of Invention, Skip & Flip, and Tim Buckley. In a strange twist of fate, Mundi had also been a fill-in drummer during Buffalo Springfield's spring 1966 salad days, while he was playing with Mastin & Brewer, two other Freidman alumni. After a brief break in late '67/early '68, the Canadians in the band finally secured proper work visas, and wert quickly assembled in a Los Angeles studio, where according to Hastings, the septet finally "sounded like a real band. We were (also) paid to rehearse and record an unheard of arrangement for the time. We wouldn't have to make a dime, much less a profit, until after the first album release! Some sources suggest that Elektra invested as much as $80,000 in the band, a considerable sum of money for the time.

Finley commented on the pre-fab concept in an interview with Larry LeBlanc in the Canadian magazine Egg in late 1969. Elektra "didn't call us Supergroup! They called us project Supergroup, their concept of all their favorite musicians." Elektra "had this multi-thousand dollar campaign to make us instant mini-rock stars' you just go through a change, but by living together and jamming together the hype goes away." I Throughout early 1968, the band wrote and honed their songs and newfound chemistry at The Las Palmas Theater in Hollywood. By summer, they were ushered into Elektra Records, brand new state of the art studio on La Cienega Boulevard to work with engineer John Heaney (and Rothchild as a producer), and proceeded to lay down enough material for their debut album over a period of eight days.

Listening to the album today, it's difficult to believe that the group was able to deliver such astounding results in such a sort time. Despite the way the group was put together, there is an incredible amount of chemistry in the grooves. In a way, the powerful combination of soul roots and hard rock moxie make the band sound like they had been together for years, rather than months. A pair of the most obvious cuts that show this off are versions of a pair of songs that appeared on a Little Richard album; "You're My Girl", which would later be covered by Rod Stewart, and Larry Williams' "I Need Love." Both were brought to the group by Billy Mundi. Cut live in the studio (as all of the tracks were), there is a solidarity to the performances and precision in Hastings' and Weis' guitars, Mundi's heavy (and well-recorded) drumming - a year before John Bonham defined the art - and especially the blinding white funk of lead singer John Finley.

The band also established themselves to be excellent writers as well, as proved by the albums, striking hard rock/soul opener, "When You Say You're Sorry," written by Alan Gerber, and "I Will Serenade You," a soulful, plaintive ballad by Finley. This song would later be covered by Three Dog Night, who was gathering their resources at this same period, with slightly more successful commercial results. According to John Finley, "It was Paul Rothchild's plan from the onset to record the band live without overdubs." Danny Weis discussed this concept with John Mars in Blitz magazine in 1980: "At the time, all the big groups like Cream and the Jim! Hendrix Experience were doing overdubs on all their things with something like nine guitars floating back and forth across the speakers on each track.

I was the first in Rhinoceros to want to try for a live sound with all the advantages of the studio. Michael Fontara thought it was a good idea too, and later all the other guys thought it was good bet. The way we knew our stuff then, it just made sense to play like that." It indeed did make sense, and the proof is here in the grooves. The combination of the band's overall sound, combined with the miraculous sonic rapture of the new studio, delivered by John Haeny's impeccable engineering, brought forward a new, more sophisticated sonic picture to the listener. Musically, the album is a radical departure from the psychedelic excess of the period, while still retaining a sparkling period charm that is inescapable.

In the end, this album has aged better than many of its more legendary contemporaries. What went wrong? Well is in itself is a book on its own, and the curious reader is well advised to check out the excellent website (www.rhinoceros-group.com) for the complete, heartbreaking story. Much has lien made of the term Supergroup. By 1969, between groups such as CSN&Y, Blind Faith, Blood, Sweat & Tears (and a few others that we needn't mention) were washing over the rock music scene like a tidal wave. Some of them were organically formed, and some were record industry by product. Rhinoceros was, to a large extent, part of the later category. But that doesn't mean that the group didn't have real talent, and they certainly deserve a rightful place far and away above the standard rock & roll cult following. Following the release of the album and a long season of touring, the group split into two factions: Finley and Gerber wanted to remain in Los Angeles to continue working with Paul Rothchild.

The remaining Rhinoceri wanted to move to New York, and away from Rothchild's apparently autocratic control for their follow-up album, Satin Chickens. At a crucial band meeting, Gerber decided to side with the rest of the band, and they relocated and changed producers. In the spirit of keeping the band together, Finley reluctantly hung in and joined them in the New York. The resulting two Rhinoceros albums, Satin Chickens and Better Times Coming had some fine moments, but lacked the cohesion of the debut. The real magic is on the album you are now hopefully enjoying.
by Matthew Greenwald 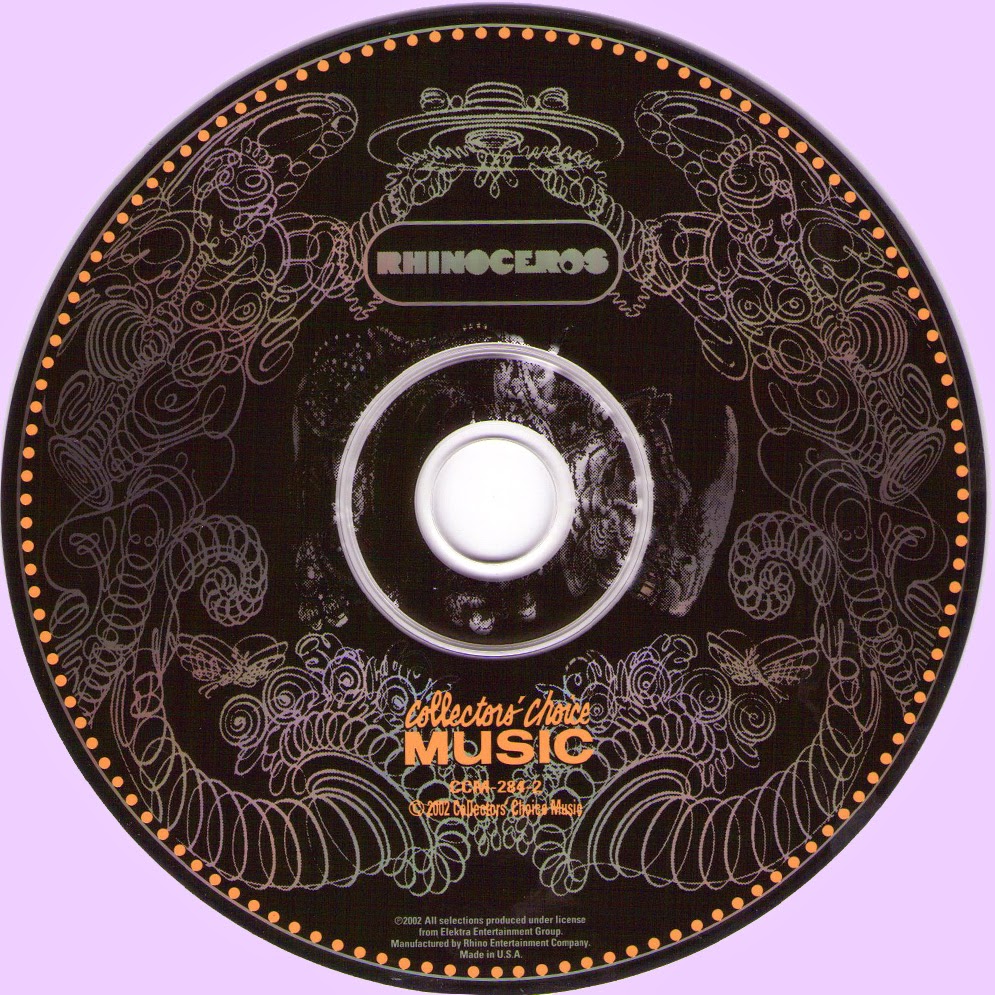