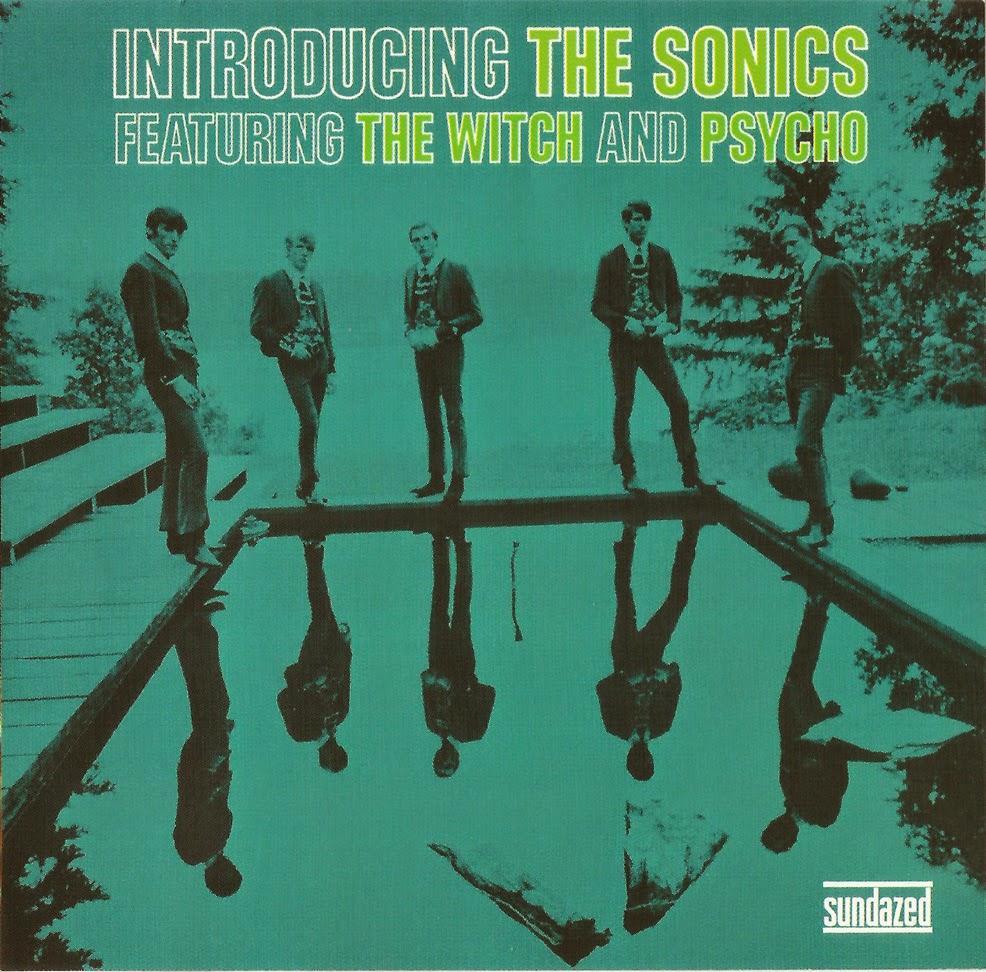 No one ever squeezed more juice out of the basic rock-band lineup than The Sonics did when they cut the earsplitting teenage anthems found on Infroducing The Sonics. The album (actually the band's third longplayer, not their first) features the classic Sonics lineup: razorblade-gargling lead vocalist/ keyboard man Gerry Roslie, apocalyptic guitarist Larry Parypa, honking tenor saxman Rob Lind, leather-fingered bassman Andy Parypa, and caveman drummer Bob Bennett.  And lefs get one thing straight here:

The Sonics were, hands down, the most powerful band ever to come from the Pacific Northwest. The Tacoma quintet didn't just play songs, they assaulted mem with the heartstopping howl of someone who's accidentally pulled the hair dryer into the bath tub along with them on Saturday night.

They have the look of teenage assassins, ready to blow the minds (and eardrums) of every kid lucky enough to stagger into Saturday's dance at the local armory after downing a bottle of Ripple out in the parking lot. When Reddy Kilowatt saw The Sonics coming, he must have ducked over to the other side of the street, pulled up his collar and pretended to be window-shopping in deference to these scary newfound Kings of High Voltage.

Has anybody ever kicked off an album with a song hatf as smoking as The Sonics' monstrous garage killer "The Witch?" "She's gonna make you itch/Cuz she's the witch," shrieks Roslie as every kid in the crowd makes up his own rhyming couplet to the song mat would become a regional smash.

"You Got Your Head On Backwards" is a deep bow in the direction of "I'm A Man" by Mr Bo Diddley and The Yardbirds, complete wilh scathing put-down out-chorus: "The way you're walkin' talkin,' it ain't lookin' right/The way you've been actin' is too far outta sight." Hey, everybody knows some stuck-up girl just like that, and it's about time she got what was coming to her. And if you dug that, have a listen to the real, bona fide "I'm A Man," with screaming guitar, thumping drums, howling organ, and wailing harp-all coming together in the traditional, orgasmic conclusion that'll leave you gasping for breath and lighting a coffin nail.

John Sebastian's sweat-stained Lovin' Spoonful tale of life in the fast lane, "On The Road Again," gets the complete Sonics wakeover, as our heroes rip through me tune like they just wrote it on the back of a ketchupstained paper napkin over a 3:00 a.m. lumberjack breakfast. Ihe legendary "Psycho"-another Sonics smasheroo-finds Roslie letting go with one of his all-time best howls, art earwax-melting blast guaranteed to keep your  pad pest-free for at least a year.

Everybody's gotta take a deep brealfi now and then, and "Love Lights" does very nicely as a back seat make out ballad for the over stim ulated teens who've just spent the night shaking like crazy to the frantic sounds of The Sonics. "I'm Going Home" is a wailing, Eric Burdonlike lament about being treated bad in the big city. Come on home, boys. Tacorna will always welcome you with open arms. "High Time" lets you know The Sonics mean business. As if there was any other time for these guys than high time! “I’mARogingStone" is one of those soulful, mid-tempo things, kinda like, uhh, The Rolling Stones, but carried into the stratosphere by Lind's paint-blistering sax and Roslie's ultra-cool, roller-rink organ.

As the man says: "I've been wearing real long hair/ What people say, baby, I don't care." You bet. The carbon monoxide fumes fairly swirl on garage wailer "Like No Other Man," until Larry Parypa cuts loose with an air-sucking guitar run that would put the lid on the fire inside Mt. Vesuvius. "All the birds love me, they know I'm a star," snickers Roslie on "Maintaining My Cool" while his pals croon, "Wine, women and song" in the background.

Next up, four monstrous bonus tracks, not found on the original LP. "Bama Lama Bama Loo”, written by Georgia Peach and King Of Screech, Little Richard, finds Lind's volcanic tenor erupting here like he just stepped off the Greyhound bus, elbowed Mr. Penniman's sax-man off the bandstand, and started blowing like somebody had o gun to his head. "Leave My Kitten Alone"- produced by Jerry Dennon and engineered by Kearney Barton (tike everything here except for "The Witch" and "Psycho"}- serves as fair warning to anybody contemplating meddfing in the love life of these fair-haired boys.

Man, you'd have to be crazy to even think about it! The insinuating "Dirty Old Man" slinks through the back alleys of Tacoma like some old geezer with an oversized raincoat and a sticky stack of French postcards, while Roslie and his boys cackle like dazed octogenarians. "Diddy Wah Diddy"-a tune that could have been written just for The Sonics-gives versions by The Remains, Bo iddley, and Captain Beefheart a run for heir money, no mean feat.

If there were any justice in the world, the Sonics would have been inducted into the Rock & Roll Hall Of Fame long ago and be living as tax exiles in the south of France, sipping vintage wine and playing baccarat while bikini-clad nubiles bring them frosty drinks. Instead, they can rest easy knowing full well that they created a small body of napalm-hot rock ‘n’ roll that can stand up to anybody's. And I mean anybody's.
by Jud Cost, Santa Clara, CA 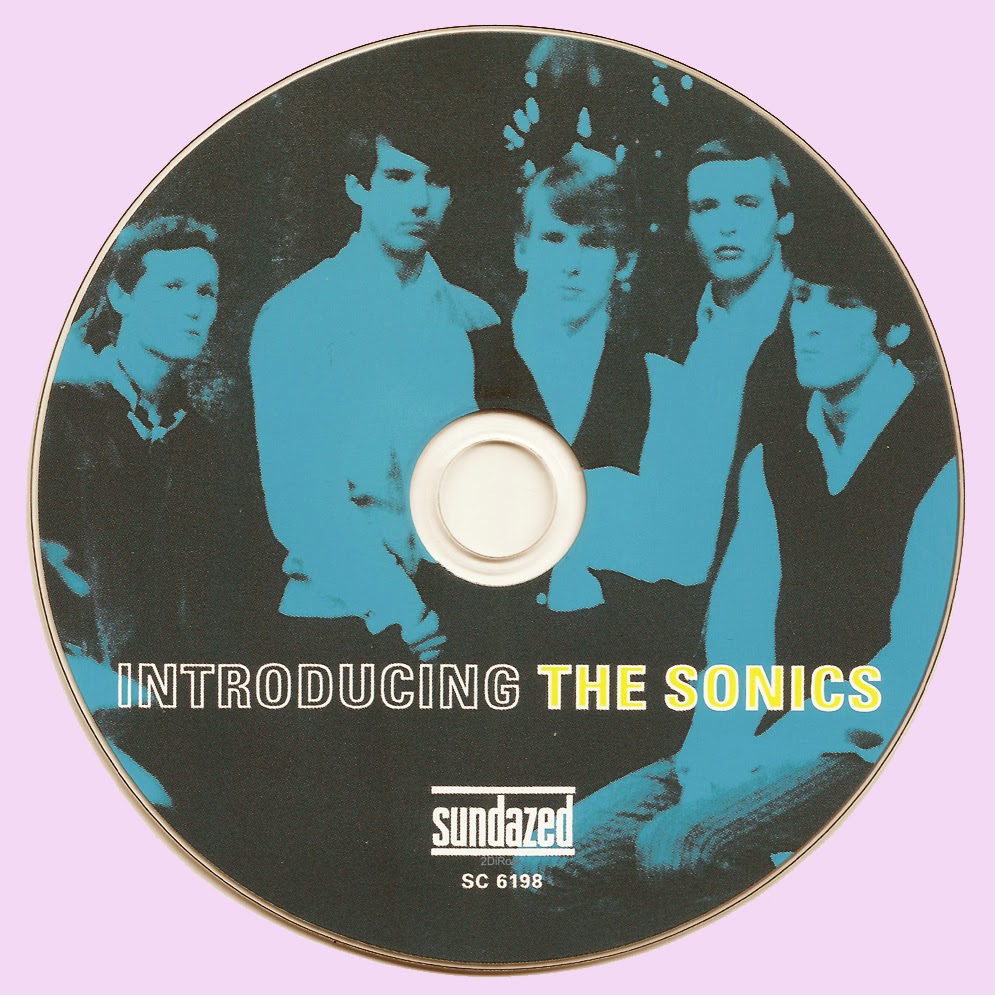