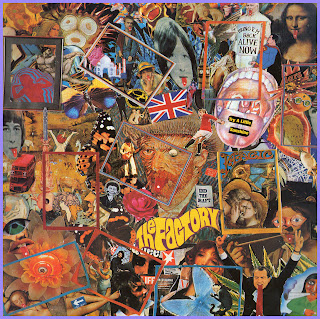 Whatever the sixties will be remembered for, be it Mods against Rockers, the pill, mini-skirts or the beginning of the youth revolution, what probably had more impact was the drug culture and psychedelia. Even the Beatles lost their family appeal after Bob Dylan turned them on with a cigarette that was stronger than Capstan full strength.

Mods grew their hair long as they also grew in age to slow down from their years of popping pills as proved by The Small Faces who told us "Here Comes The Nice" and led us into "Itchycoo Park" on a Lazy Sunday Afternoon". International Times let others know that others knew as the Furry Freak Brothers and Timothy Leary shared a common bond.

The doors of perception were open as were the minds of those who ventured underground. I first met Damon Lyon Shaw in 1965 when I joined IBC studios in London. He had already been there two years and had worked with The 'Stones and The Kinks. Eventually he went on to record The Who's "Tommy", The 'Stones "Got Live If You Want It", The Small Faces, Cream, Radar Love, Status Quo and The Factory! I worked cutting masters and was lucky enough to cut the first Jimi Hendrix releases as well as The Who's "Live At Leeds", We were having a great time every day, and getting paid for it, but we felt the urge to put our experience into production and so we had to find a band... I didn't really know what I was doing at a party in Surrey.

As a North Londoner, I hardly ventured south of the Thames, but there I was and there I met a 17 year old guitarist who bent my ear about a band he was in. Ian Gates was one of those young kids who looked like he was in a band and when he found out which part of London I came from he told me they were playing near there the following Saturday. It wasn't that far from where I lived and his enthusiasm saw me promising to turn up. "What are you called" I asked. "The Factory"... I did go and what I saw was a trio that were raw and gutsy as they laid into Hendrix and Cream numbers while strobe lightning seemed to freeze their every movement.

That was it, I had found the band we were looking for and it took no time to fix up a session in the studio. 16 year old drummer Bill MacLeod and 21 year old Jack Brand on bass soon adapted to the discipline of working in a studio, while Ian played as if he was a session musician. "Path Through The Forest” (taken from a demo sent in by a writer now long since lost in the mists of time) was their debut single but this was not released in it's original intended form.

We had wanted to add effects but someone from the record company straightened his tie and said no. A few good reviews and no plays on national radio saw the band going back to playing in and around town as we planned the next session with the boys. This was at a time when "San Francisco (Wear Some Flowers In Your Hair)" was top of the charts as a song that was supposed to be representing all those turned on freaks. I first heard "Try A Little Sunshine" while listening to my friend John Pantry's demos.

It was summer and everyone was trying some. The message was clear even to befuddled minds as a trip to Kew Gardens became a pleasant Sunday afternoon, "Listen, can you hear the sounds of love?" he asked, as he stared at the setting sun. The title was enough to put off the BBC from playing the single and once again we were left with just a good record. The man in the tie buttoned up his suit and went home! As well as another Pantry original "Red Chalk Hill" Factory recorded covers of Fairport Convention's "Mr. Lacey" and Paul Revere & The Raiders' "Gone".

Other cover songs that the band recorded included "So You Want To Be A Rock 'n' Roll Star" and "Second Generation Woman" - both of which I sang lead vocals on, a fact that has remained a secret until now. Only the latter has survived to be included on this disc. The Summer came and went and disenchantment grew within the band. Then they were gone, each to find their own niche in the music business as playing for fun became lost in their search for a more secure future. In a short time they had released two classic singles, (augmented here with two rare demos) and we were to move on to our next project, Five Day Rain.

But time was no barrier and years later The Factory received the recognition that was denied all those years ago. Not so long ago I received a package of old tapes and acetates from another engineer who used to work at IBC. His name is Denis Blackham and he is known in the mastering world as "Bilbo". A few days before this we had been talking on the 'phone about Factory and he reminded me of the original version that we never finished.

Over the years the tape of the effects that we both played around with were lost but he said he thought he still had an acetate of what we intended to use on the final mix. He was right and using the latest studio equipment we managed to recreate "Path Through The Foresf exactly as we intended it to be. It took 25 years to get the original version on vinyl so take a path through the forest, try a little sunshine and you'll be there.
by Brian Carroll - 1996 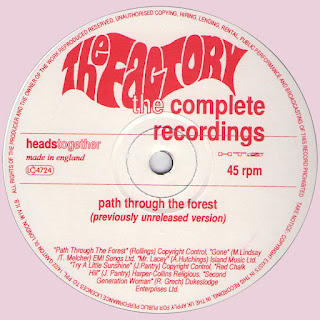