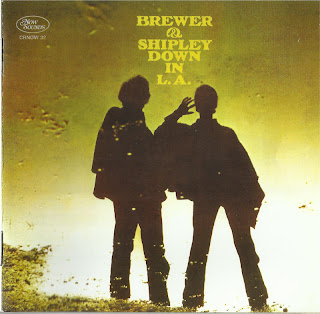 From the beginning Down In L.A. never got its due when staff songwriters Michael Brewer and Tom Shipley immediately split L.A. after recording the album for A and M.  The newly formed record label figured their songwriters had left the music business altogether. A year later Brewer  and  Shipley, now signed as recording artists by Buddah Kama Sutra, released their classic folk-rock Weeds album on their new label.

Their debut album came about because A and M Records recognized that two of their staff songwriters had a unique sound of their own and green-lighted them to record an album including some of the songs they had sold to other artists.  The Down In L.A. album has sometimes been unjustly mislabeled a collection of demos.  The fact is, the album was professionally produced and recorded with some of the best studio musicians in the country, the now famous ‘Wrecking Crew.’

These were not demo tapes.  Leon Russell, Jim Messina, Hal Blaine, Joe Osborn, and Jim Gordon were among the great supporting musicians supplying their talents.  As mentioned, several of the songs on the album were originally recorded by other artists when Michael  and  Tom were working solely as staff songwriters for A and M; but, as is usually the case, the songwriters’ interpretations of their own songs were superior to the other artists’ covers.  A good example is Brewer  and  Shipley’s version of Tom Shipley’s “Time  and  Changes,” which has a different feel and still sounds good by today’s standards, while the four 1967-68 covers of it by other artists all sound dated.

While I love to hear Brewer  and  Shipley perform their songs with just acoustic guitars, I also love the production on Down In L.A. with its light orchestration and full rhythm section that still lets Brewer  and  Shipley’s, now trademark, intertwined acoustic guitars take center-stage.  It has a great sound, albeit different than their subsequent albums.  This is one of those albums where all the songs just seem to fit in mood, tone, and sound, like a Rubber Soul, an After The Goldrush, or a Tea For The Tillerman.  All those albums had songs that fit together and created an overall mood for the album.

Down In L.A. fits in that ilk. Because Down In L.A. was the only album recorded on A and M, none of these songs ever made it to Brewer  and  Shipley’s Buddah compilation CDs, but there are more than a half dozen songs that could have legitimately been included on any label-neutral best-of compilation.  Truly Right, Time  and  Changes, and Keeper Of The Keys were good enough to be covered by other artists, and other songs from the album like the beautiful Green Bamboo, Dreamin' In The Shade (Down In L.A.), An Incredible State Of Affairs, and the haunting I Can't See Her, are equally worthy of inclusion on a Brewer  and  Shipley anthology.

If asked to pick their favorite Brewer  and  Shipley album, most fans would understandably pick Weeds or Tarkio.  If asked to pick my favorite, I would have to stop and think about whether it would be Down In L.A. or Weeds.   Down In L.A. is a great album that has its own beautiful and unique Brewer  and  Shipley sound, and after almost 44 years, this lost classic album has finally been released on CD.
Bil/bard Magazine October 26, 1968 Free Text
the Free Text
Posted by Marios at 5:44 AM 12 comments: