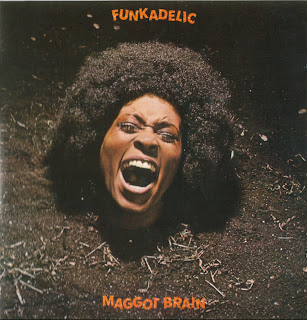 "Maggot Brain" is far more than something that can be defined by any individual genre. It's a fusion of so many musical ideas that it simply should not work. After all, any album that is defined by the label of "funk", traditionally an upbeat style of music really should not start with a 10 minute guitar solo owing more to the blues than anything else. It's hard to really compare this solo to much else (it's been described as the greatest solo ever, and with very good reason), but if you really want a point of comparison it's probably a good idea to listen to Shine On You Crazy Diamond by Pink Floyd, since there are some definite similarities there, not least in the blues influence, and in the way that the songs builds and builds.

However, and remarkably, this solo (played by the late Eddie Hazel) actually outdoes that song in terms of pure emotion. As some of you will know, Shine On You Crazy Diamond is a tribute to Syd Barrett, the former member of Pink Floyd, and as such really is an emotional song, but it simply can't live up to this. Whereas Gilmour plays with feeling, and not much speed, here the guitar is both dripping with emotion as well, at times, sounding like it's going to fall in on itself, such is the passion and speed with which it's being played.. The fact that Hazel was simply told by funk legend George Clinton (the creative force behind this album) to "play like your mother just died" may account for the quality of this song, but the fact that it was recorded in one take makes it a truly remarkable piece of music, as well as being completely and totally atypical of anything that could really call itself "funk". You see why I put that disclaimer at the top yet?

Although that's by far and away the biggest oddity on the album, it's by no means the most thrilling track here, beautiful though it is. The next two songs, Can You Get To That and You And Your Folks, Me And My Folks are far more upbeat, although hidden deep under the waves of bubbling funk is the dark secret of this album, namely how political it is. And here's another thing that makes this odd. Funk simply isn't meant to be like this. Funk is meant to be James Brown, singing about feeling like a sex machine. In spite of George Clinton's reputation though, the lyrics here include lines such as:

While this is obviously very much a product of the times (in Vietnam war era America it would have been hard to have some political references somewhere in your music), and the idealism of the record can grate on some people, in a way that merely strengthens the album still further. After all, although some of the lyrics here focus on the staple of women, and Clinton?s love for them, ideas such as "You've lost the fight and the winner is fear" would be considered as lyrical genius if more conventionally respected songwriters wrote them. What am I trying to say here? Basically, don't write this album off because of the politics that's in here at times. Although it can be corny, it's genuine, and adds yet another layer to the intense musical experience that's available with this album.

On the subject of musical experiences, I perhaps haven't talked about just how many influences this album has, and how much it subsequently influenced. Although, as I've said, there are blues influences clearly obvious here, there's also jazz, soul, psychedelica, as well as a clear precursor of what would become metal, on Super Stupid, which is built around a blazing guitar performance from Hazel. If the title track sees him displaying his most sensitive side, this song shows how well he can write a truly memorable riff of the sort that Jimmy Page would rip off Willie Dixon for, before following it with a virtuoso solo. Not only do the band play many styles, but my God do they do it well. Bernie Worrell, who plays keyboards on this album often takes a back seat to the other members of the band, but on Hit It And Quit It gives a demonstration of his talents, as well as being the proud possessor of a chorus that can probably be heard from outer space, as well as being the spiritual twin of Can You Get To That, which features greatly diverse vocals, with a gospel choir providing the bulk of the singing, with a deep baritone occasionally entering the mix.

If there's one criticism of this album, it's that Back In Our Minds is on it. While not a bad track in its own right (in fact it's quite enjoyable when listened to by itself), it simply isn't up to the standard of the rest of the record. Although it features some really odd effects that I'm not even going to try and attribute to a particular instrument, it sounds as if it was recorded as an afterthought, with vaguely dissonant voices moaning away in the background, and no real structure to the song existing. Other than that though, the record's near perfect. Unlike some other great albums they've also put the record together pretty much to perfection. With the opening and closing track both being over 9 minutes long and no other song going over the 4 minute mark it's short enough to be easily listenable to, but with enough themes and ideas on never to get boring. And on final song Wars Of Armageddon, all hell breaks loose.

The most obvious immediate comparison is to something like Revolution 9; The Beatles's famous ambient piece that they never really sounded like either before or after, but that's to ignore the genius of the song. Although there are lyrics to it (mainly freedom chants of one sort or another), these very much fade in and out of the music, and aren't the focus at all. Latin drumming, constantly shifting guitars, and electronic effects that sound as if they're gatecrashing the band's private party make this sound as if the band just sat down, turned on every machine they could find in the studio, and recorded what happened for the next 9 minutes. Now I think of it they may have done just that, but the fact remains that no matter how they got there, Wars Of Armageddon is a true masterpiece, with both musical skill and effects such as cows mooing, airport announcements, and background whispers combining to keep the listener intrigued for the full duration of the song.

Who would I recommend this album to? In a word, everyone. It's undoubtedly a definitive album, although of what genre I'm not really quite sure. At times emotionally pure, at others sounding like an aural orgasm, this is a work of music that most bands would be forced to hold their hands up to and admit that they just don't have the creativity to even begin thinking about making an album like this. If you hate all the genres that I've shamelessly namechecked in this review (just for clarity's sake I've worked my way through jazz, soul, funk, psychedelica, metal, blues, and I'm now adding rock, just because I can), then at the very least download the title track. As an exhibition of how good the guitar can sound, that's pretty much unsurpassed. For everyone else, just get the album. It's quite possible that you'll never look at music in quite the same way again.
by Sputnik Music 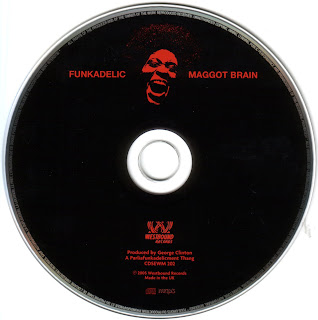