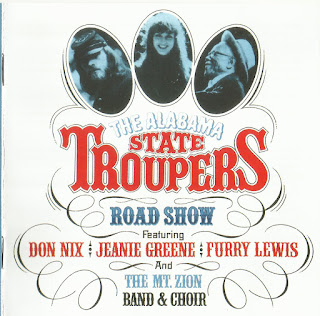 Today, it's almost unthinkable that a major record label would send a 15-piece band fronted by a 78-year-old bluesman and two virtually unknown singers on the road for promotional tour dates at $1.50 per ticket. But that's precisely what Elektra Records did in 1971, when the Alabama State Troupers hit the circuit. The glorious results are heard on this reissue of the group's lone live album, issued as a two- LP set in 1972 and released legitimately on CD for the first time here. Point man for this unorthodox trek was Don Nix, who had already inscribed his name in music history by the time the Troupers took to the highway. His tale is told in detail in his literally delicious 1997 book Road Stories and Recipes, which mates Nix's rich curriculum vilae with down-home culinary treats proffered by a host of famous colleagues. (Nix plans to re release his memoir in 2014.)

A Memphis native, Nix was the founding baritone saxophonist of the Royal Spades, a Bluff City R&B group that also included his high school buddies, guitarist Steve Cropper and bassist Donald "Duck" Dunn (later of Booker T. & the M.G.'s), and saxophonist Charles "Packy" Axton. Rechristened the Mar-Keys (an adaptation of the Marquis, a handle suggested by Nix), the group cut the 1961 single "Last Night," which became the first instrumental smash for Stax Records, the Memphis label co owned by Axton's mother Estelle. After tearing up the chitlin circuit in front of black audiences thunderstruck by the soulful skills of the young, white players, the Mar Keys disbanded in 1965. Nix soon learned the fundamentals of record engineering at John Fry's Memphis studio Ardent and became a house producer at Stax; he also served on the label's famed all-star tour of Europe and Scandinavia. During a sojourn in Los Angeles, he became a close associate of Leon Russell, and jammed with the Tulsa-bred musician's massive Electric Horn Band, which planted the seeds of his own live project to come.

"Leon put together the Electric Horn Band right before [Joe Cocker's] Mad Dogs & Englishmen [big band]," Nix says today. "We'd rehearse every Sunday afternoon in the warehouse over in Studio City. Some Sundays there would be 30 people – maybe two or three drummers and two or three keyboards. It was an amazing thing. We did it just for fun. That's kinda what started it all." Nix became the first artist besides Russell signed by Denny Cordell's Shelter Records, and released his debut solo album, In God We Trust, on the label in 1971. Like that record, a follow-up, Living By the Days, was recorded at Muscle Shoals Sound, the Alabama studio established in 1969 by the former house rhythm section at Rick Hall's nearby FAME facility. Impatience with Shelter led Nix to secure a release and sign with Elektra, which picked up the second album.

In '71, Elektra was making a major investment in acts forwarding a funky amalgamation of rock, R&B, blues, country, and gospel, and Nix became a major player in the mix. He had co-written four songs with singer-guitarist Lonnie Mack (of "Wham!" and "Memphis" renown) for The Hills of Indiana, Mack's third album for the company. He had also produced Maty Called Jeanie Greene, the debut album by seasoned backup singer Greene, a gospel-infused belter who like her thenhusband Marlin was a key performer on sessions at Muscle Shoals. The label's Nashville A&R chief Russ Miller envisioned a low-priced package tour that would jointly promote Mack, Nix, and Greene. It was left to Nix to assemble a band.

Nix says, "I loved Muscle Shoals, 'cause I'd been working down there, and I loved most everything in Memphis. So I got half my players from Muscle Shoals and half from Memphis. I think we had 15 people altogether. I had two drummers, two guitar players, two keyboard players, six background singers." The supporting players were dubbed the Mt. Zion Band & Choir, after a Baptist church spotted during an Alabama photo shoot. From Muscle Shoals Sound, Nix drew Marlin Greene, keyboardist Clayton Ivey, bassist Bob Wray, and hotshot guitarists Wayne Perkins and Tippy Armstrong. Drummer Fred Prouty joined from FAME. The Memphis contingent included keyboardist Ken Woodly and Jerry Lee Lewis' longtime drummer Tarp Tarrant. Brenda Patterson and the vocal trio the Minutes (Mary Anderson, Carolyn Watkins, and Marianne Watkins) were drafted for choral duties. It was a huge group for the day, but its big sound had already been successfully exploited commercially by Delaney and Bonnie & Friends and Cocker and Russell's Mad Dogs & Englishmen, both of which had involved Russell's participation.

Nix says. "I was doing that stuff back in the '60s. I worked with Leon for five years, from '63 to '69. My gig was always a soul choir, having background singers singing like they were in church. He kinda got that...I always had two drummers. That's a really dynamic thing in a live concert. Leon had three of 'em on Mad Dogs & Englishmen. I'm not saying I started it or he started it." Disaster nearly struck the Troupers during the ramp-up for the tour, when without explanation Mack bolted after only three days of rehearsals in Muscle Shoals. "He just split," Nix says. "We went into his room that morning, and he had the Bible open to a passage - 'Get thee out of Zion.' I guess he took that as a sign. I called the people at Elektra and told 'em, and they said, 'What you gonna do?' I said, 'Furry Lewis!' It was a godsend."

A close friend of Nix's since the early '60s, septuagenarian singer and slide guitarist Lewis had recorded several indelible acoustic blues sides in 1927-29, then retreated from music to work as a Memphis street sweeper. Rediscovered by folklorist Sam Charters in 1959, he had cut new albums during the '60s blues revival, but was scarcely known outside the universe of genre aficionados. Lewis had made cameo appearances on both of Nix's studio albums. "It was just fate that I was gonna get to take him all over the country and expose him to all these people who had never heard of the Delta blues, mostly in California and Washington state," Nix says. After warm up gigs in Louisiana, Nix's party-hearty rock 'n' roll caravan reached the West Coast, where at one location they received an unusual greeting. "We flew into San Francisco," Nix remembers, "and on the Holiday Inn sign was, 'WELCOME ALABAMA STATE TROUPERS.' About the second night we were there, I got a phone call, said, There's some people down here that want to talk to you.' I said, 'Who is it?' They said, 'California Highway Patrol.' They thought we were the real Alabama State Troopers, although it was spelled different, come out for a convention or some shit. I said, Tell 'em I don't think they want to talk to us.'" Lewis - who sat onstage after the conclusion of his acoustic opener in a rocking chair set on a vintage Persian rug - proved a scene-stealing favorite of the assembled hippie multitudes. ("Halfway through the first song, they were on their feet," Nix says.) One impromptu epiphany from Lewis in Monterey, California, literally stopped the show.

"It was real overcast," Nix recollects. "We're about halfway through our show, and Furry stands up, and everybody stopped playing. He had a wooden leg, so he kinda hobbled up to the microphone, and he looked up at the sky. And I swear to you, the sun came out came out from behind the clouds right on him, right on his face. Everybody just stopped - there were 6,000 or 7,000 people out there. He looked up and said, 'A chicken ain't nothin' but a bird.' It was like somebody rolled a bowling ball through the crowd. They had no idea what it meant, but it was hip." The electric portion of the Troupers' set included gospel shouters sung by Greene and Nix and barn-burning, soul-infused rockers essayed by Nix. The band invariably closed the show with "Goin' Down," an insistent Nix composition first recorded by the Memphis band Moloch and later memorably covered by Freddie King and Jeff Beck, among others.

Of special note were the searing solos by Perkins - who would soon audition to replace Mick Taylor in the Rolling Stones – and the lesser-known Armstrong, a veteran of sessions with Tony Joe White, Albert King, and Linda Ronstadt and a glamorous, deeply tormented character. Nix says, "One night on the tour, we were in Pasadena. They would have three or four spots, and sometimes on a guitar solo they'd shine 'em on Tippy, and he would step out of the spotlight into the dark, and he would watch his hand go up in the air. That night I asked him, Tippy, what are you doin' in the dark?' He said, 'Oh, I just like watchin' the sparks fly off my fingers.*" Recorded at dates in Pasadena and Long Beach, California, The Alabama State Troupers: Road Show is a flavorful memento of lush rock 'n' roll days gone by. But it is no mere curio: robust and puissant, it can hold its own with other classics of Southern rock's first great era.
by Chris Morris, Los Angeles, September 2013 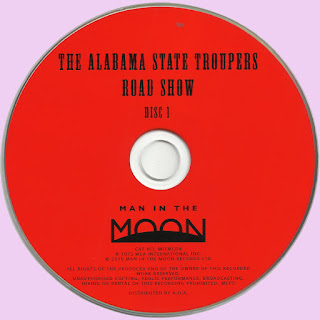 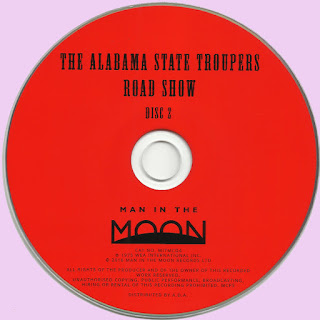 Free Text
Text Host
Posted by Marios at 10:43 AM 4 comments: