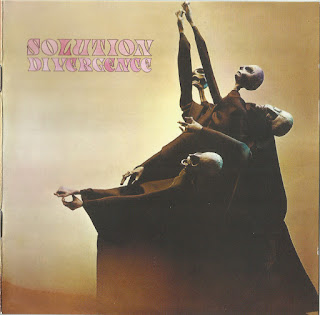 For the band's second album, Divergence, Peter van der Sande was replaced by Guus Willemse. The new line-up seemed to gel better, and this line-up would stay the same (although with various guests such as Jan Akkerman joining in) until the band's demise in 1983. Divergence was less energetic and more ruggedly powerful than its predecessor, containing more structured pieces than before.

Ironically, the band reveal in the second line of Second Line that English is not their native tongue: 'Well here I am/Look me into my face.' In fact, the first half of Second Line consists of an astonishingly beautiful piano ballad, in the style of Elton John perhaps. Barlage's sax solo is incredibly moving. The production makes everything sound like a dream. This is the sort of song that needs lyrics you can shout at the top of your lungs, and yet whenever Willemse is not mumbling his lines, they don't make any sense, a shame indeed. The second half of the song consists of a Soft Machine-y jazz fusion instrumental, which has nothing to do with the first half, and seems a little out of place.

This album is most famous for its title track that was covered by Focus in their epic suite Eruption from the Moving Waves album. Oddly enough, Moving Waves had come out the previous year, which lead to many people believing Solution had just stolen a track from Focus. This track is really a chance for Barlage to show just how he can hold a saxophone. He gets to repeat the same monumental sax solo a total of three times throughout the track's six minute length. On the other hand, the rest of the instrumental is very straightforward, and I found that I pretty much worked out how it pieced together after three listens. Interestingly, a drum pattern from Koan reappears, and is very similar to another pattern heard on the title track from Supersister's Pudding en Gisteren.

One throwaway piece later, and we get to Concentration, probably the finest track of the lot. Once again, we can split this song into two halves, the first a smooth laid-back blues piece with lyrics, the second a speedy 7/8 instrumental in the style of Soft Machine's Esther's Nose Job. The instrumental in the first half of the song contains a subtle hint of the proggy goodness that's in store. The lyrical section is a perfect blend of jazz and blues. Willemse's lyrics aren't always audible, but he delivers them with gusto. Afterwards, the brisk 7/8 instrumental section leads us on a roller-coaster of themes and riffs, keeping the listener hooked throughout. A masterpiece track if I ever heard one.

Yet another throwaway track later and we finish on New Dimension. The use of organ on this track is simply mesmerising, and the riff and chord sequences used are subtle but also darkly powerful, playing with the mind on a subconscious level. Before I knew it, I was coming back for repeated listens of this bizarre piece.

Esoteric have done a wonderful job with these albums. Both booklets contain similar well-written essays by Wouter Bessels. I did spot a minor mistake however, because it appears that the track Theme from Divergence was sampled in Erykah Badu's track Soldier, not in Victory as the notes suggested. Nevertheless, these notes tell you all you need to know about the band. The artwork reproduction (back and front) is spot on, no less than what the paying customer deserves. The remastering is also brilliant, with everything sounding crystal clear, and the bass coming through especially nicely. Sadly, there are no bonus tracks appended to the albums, but this is not necessarily Esoteric's fault.

Solution may not have all the skill and songwriting ability as some of their contemporaries *cough* Supersister *cough*, but they certainly have enough to keep this prog fan satisfied. With only a few minor weaknesses, the band's first two albums are gems of the jazz-prog genre, and have yet again convinced me of the quality of Dutch progressive rock. Even if you aren't so keen on jazz, you may be pleasantly surprised by what you hear.
by Basil Francis 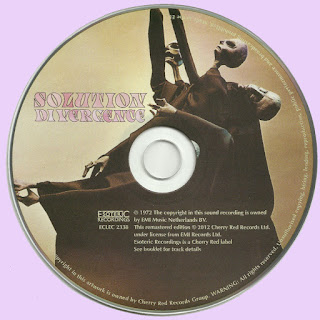 Free Text
the Free Text
Posted by Marios at 9:34 AM 6 comments: