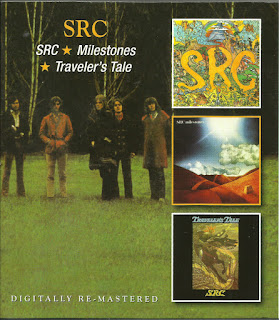 Much was expected of SRC, and for good reason. Aside from being exceptional songwriters and musicians, the Ann Arbor, Michigan band had the support of both the public and a major label. Bursting with potential, they were clearly primed for global domination.

Signed to Capitol Records, SRC (short for the Scot Richard Case) waxed a trio of full-length albums for the imprint that have now been brought together as a double-disc package by Beat Goes On Records. Sad to say, the band never conquered the world, which was no fault of their own, as their efforts weren’t as widely distributed and promoted as all hoped they would be. But they remained tremendously popular locally and continued to be held in high regard in later years by those exposed to their material.

Released in 1968, the band’s debut album, SRC, crackles and crunches to the tune of a heavy beat. Grinding Hammond organ passages producing feelings of gloom and doom share space with squealing acid-stained riffs, while the drumming is tribal and toxic. Self-possessed vocals, alternating between light and dark, complete the sessions.

A thoroughly eerie environment envelopes the moody “Black Sheep,” and songs like “Daystar,” “Exile” and “Paragon Council” are grafted of science-fiction visages. Imaginative and freaky, SRC often resembles a grungier version of the Doors.

The band’s next album, Milestones, which appeared in 1969, proved to be quite different than its predecessor. Gone was the jagged edge, replaced by bright singing, intricate melody lines and sophisticated structures dripping with smoothness.

Clocking in at over eight minutes in length, “The Angel Song” breathes in and out to a lush terrain of progressive movements, where “Show Me” and “I Remember Your Face” are glistening ballads.

But by no means had SRC turned soft, as clarified by “Up All Night,” “No Secret Destination” and “Eye Of The Storm,” which pulsate steadily with zippy frequencies. As well, an ambitious cover of “In The Hall Of The Mountain King” exhibits the band’s incredible improvisational skills.

SRC’s final album, Traveler’s Tale hit the decks in 1970 and was stuffed and buffed with hard rocking razzle dazzle. Blazing guitars, plucked with polish and precision, augmented by rows of inventive tempo changes propel cuts such as the bluesy “Midnight Fever,” the whammy jammy “Across The Land Of Light” and the sweeping swirls of “By Way Of You” to stratospheric heights.

Loaded with lashing licks, aided by super-size harmonies, majestic keyboard excursions and burning hooks, “A New Crusader” steps forward as another winner included on Traveler’s Tale, and then there’s the haunting psychedelic-soaked vibe of “Street Without A Name,” the gospel styled “The Offering” and “Diana,” which crosses neo-Latin flavored rhythms with jazzy indentations.

As strongly indicated by these recordings, SRC was ambitious and adventurous. Pouring their hearts and souls into their music, they created tunes smacking of artistic integrity. Those attracted to the enterprising musings of the Pretty Things, Deep Purple, Procol Harum and Yes will certainly appreciate the equally exciting sounds of SRC.
by Beverly Paterson 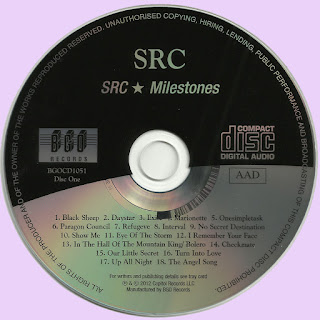 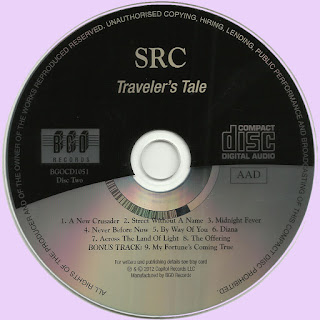