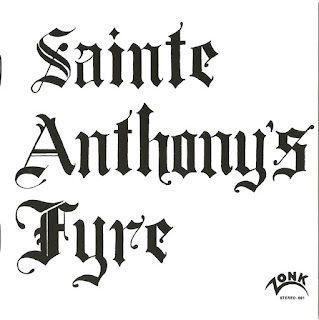 Legendary proto-metal/psych private press side: released in 1970 this is a classic wasted thug-punk album with a ton of fuzz, crude riffs and a totally crunching rhythm section giving way to doofy harmonies and endless murky distorto solos. The amazingly named Greg Ohm handles guitar and vocal duties and his approach is totally first Blue Cheer album in terms of its ambition and inability to match Hendrix in terms of third stone sonics. The lyrics are classic Bonehead about getting good loving and being turned on but most importantly the songs are simple excuses, mere vehicles, for total six string scorch.

The band have an amazing shuffling boogie style that trades doomy atmospherics for get-down dynamics and amphetamine breakouts in a way that has something in common with the early MC5’s testifying style but there’s something a little more crude and basement-blunt about Sainte Anthony’s Fyre that ‘does it’ that bit better.
by David Keenan

Gonzo, hard-rockin' madness! We're Definitely feeling this one - it's like Marty McFly time-travelled back in time and created a band that was executed per our exact taste! The "Hard Stuff", with a hint of bluesy rockin, but with a definite proto-punk attitude and swagger that elevates this above your typical Seventies hard stuff. These guys had to have had their ears on the Motor City back in the day - we're hearing the unmistakable testosterone-fueled influence of the MC5 or The Rationals, as well as the sinister oil-caked, cabaret feel of Alice Cooper too.

These dudes were apparently courted by the bigs back in the day (Felix Pappalardi even offered to produce, but ultimately wanted too much moolah) and was a hair away from signing with Atlantic, but ultimately facing restrictions that would dictate their sound, decided against it, and recorded/released this one themselves. Fuck yeah! The "rough" sound of the record really is an asset to the overall feel and probably ups the aggression and sinister feel overall, with the guitars fuzzed out and pushing the red zone to the maxx, bro. If you dig Pentagram, Blue Cheer, Grand Funk, or even newer, backward-looking bands like Graveyard, Witchcraft and Fuzz, then prepare to feel the Heat.
Acid Archives 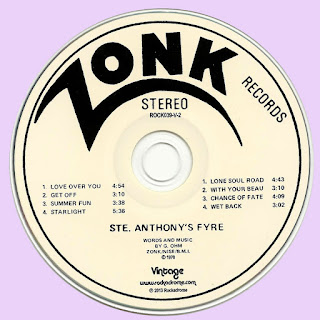