Phil Ochs - All The News That's Fit To Sing (1964 us, innovative protest folk) 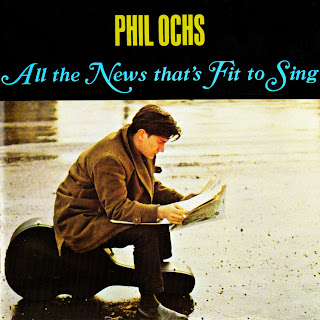 All the News That's Fit to Sing was a fit title for the debut album by a 1960s folk protest singer who some liked to call a "singing journalist." Recorded and released in early 1964, it was done at a time when Ochs's generation of young adults was getting more socially conscious and politicized. The Cold War had almost brought the world to the brink of nuclear war in the Cuban missile crisis, the Civil Rights Movement was heating up, and American military intervention in Vietnam was starting to rise from a grumble to a roar. Ochs addressed all these subjects and more on his first LP, which immediately established him as one of the foremost authors of topical song in American folk music.

Although this was Ochs's first album, it was not the first time he had recorded. Around late 1963, he had cut a song, "The Ballad of William Worthy" (also done for his debut album shortly afterward), for the Broadside Ballads Vol. 1 compilation, which is most famous for including tracks by Bob Dylan that were credited to the pseudonym of Blind Boy Grunt. It's also been reported that Phil sings on the Campers' rare Cameo-Parkway LP Camp Favorites, a collection of -- as if you couldn't tell from the title -- campfire folk songs, released in 1962 or 1963. A couple songs that Ochs performed at the 1963 Newport Folk Festival were recorded, although these did not appear until the following year on the Newport Broadside compilation.

There were other recordings dating roughly from the era of the first album sessions, though the exact dates haven't been pinpointed. Producer Elliot Mazer recalls doing an unreleased demo with Phil for Cameo-Parkway around 1964, and the 1980s compilation A Toast to Those Are Gone presented previously unissued early demos, most or all of which sound as if they come from Ochs's very early career. Five tracks (including an early version of one of his most famous compositions, "There But For Fortune") landed on the 1964 Vanguard compilation New Folks, a couple of outtakes from those sessions surfacing on a 2000 CD anthology.

Several dozen of his compositions had already appeared in the influential folk magazine Broadside prior to All the News That's Fit to Sing, and the singer informally taped dozens of songs for the publication in his early days in New York, a good many of these recordings finding release after the 1960s. Too, his songs were already starting to get covered by other artists, the Modern Folk Quartet interpreting Phil's adaptation of Edgar Allan Poe's "The Bells," and the Four Seasons doing an unlikely version of "New Town" (which Ochs never put out himself) on their folk album Born to Wander in early 1964.

It's probably never going to be known exactly how much Ochs had recorded before cutting All the News That's Fit to Sing for Elektra in February 1964. What the existence of all this early stuff makes clear, however, is that Ochs was already a prolific songwriter, with way too much material to fit onto a single LP. It also seems that, although he apparently at least skirted the wavelength of several different record labels, there was no serious rival for his services when he signed with Elektra around the end of 1963, after A&R man Paul Rothchild saw him playing live at the Gaslight in Greenwich Village. Rothchild would be credited as "recording director" on the album, with Elektra founder and president Jac Holzman acting as "production supervisor."

The Beatles had just invaded America around the time the album was recorded, and it was way too soon for recorded folk music to feel the effect of the British Invasion. Accordingly, All the News That's Fit to Sing was, like a great many folk albums of its times by both new and established artists, recorded with nothing but acoustic guitar as accompaniment. "He was a topical singer," explains Holzman today. "The more uncluttered you present a topical song, the better it is, I think. So [the production] was something that we discussed for about a minute and a half. We just went and recorded 'em, pretty much the way he would have performed 'em at a club."

Elektra did, however, enlist the services of a second guitarist, Danny Kalb, who'd become most known for his subsequent stint in the rock band the Blues Project. Kalb had more recording experience prior to the Blues Project than many realize, however, playing on folk recordings by Judy Collins, the New Strangers, the Folk Stringers, and the True Endeavor Jug Band, and also contributing a couple of tracks to the 1964 Elektra compilation LP The Blues Project under his own name.

Contributing in a non-musical capacity were friends and Broadside editors Agnes "Sis" Cunningham and Gordon Friesen, who wrote the liner notes (Cunningham penning the principal essay and Friesen offering detailed comments on each track). "We've printed about 30 or 40 Ochs songs," Cunningham remarked, "and probably have as many others scattered around simply because we haven't had the room for them or the manpower even to prepare them for the mimeograph machine."

Not much more than a dozen such songs could fit onto one LP, however, and likely Ochs and Elektra zeroed in on the stronger ones in his young repertoire. While very specific issue-driven compositions (particularly on "Talking Vietnam" and "Talking Cuban Crisis") were present, Ochs was already branching out into more general observations and critiques of military force ("One More Parade") and injustice ("Too Many Martyrs"), both of them written in collaboration with veteran Elektra folkie Bob Gibson. Another highlight was Phil's musical adaptation of the classic Edgar Allan Poe poem "The Bells," perhaps as an early indicator of his future explorations into poetic expression not tied to current events.

All of the other selections were penned by Ochs alone, including "Power and the Glory," which he likely considered among the more enduring of his early works, as he recorded an updated version a decade later for a 1974 single. Arguably the finest of the tunes was "Bound for Glory," a Woody Guthrie tribute that again proved that Phil's horizons were broader than what could be read in the day's newspapers.
by Richie Unterberger 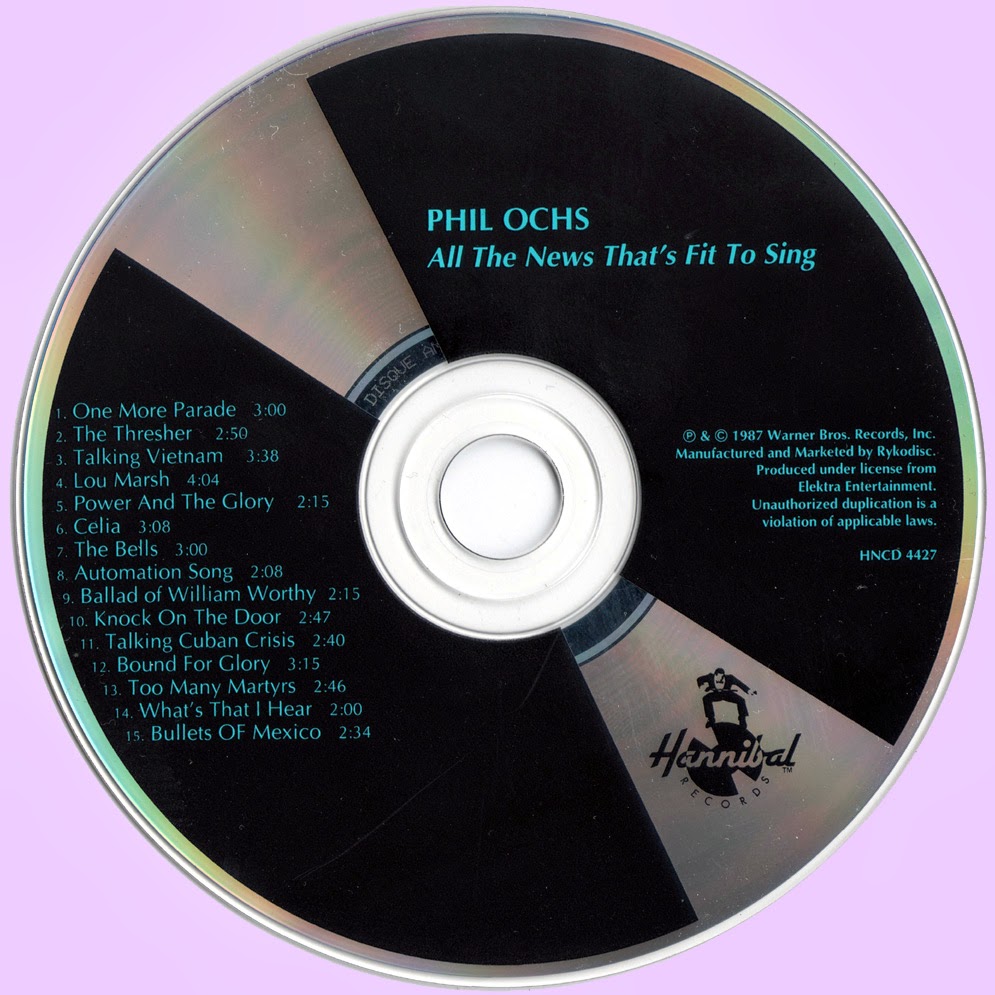