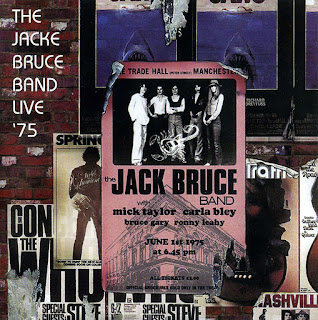 This double-CD set was one of the unexpected bonuses of the 2001/2002 remastering of Jack Bruce's RSO/Polydor catalog -- amid a search of the vaults, a tape of this performance, the only official live recording of the Jack Bruce Band, was unearthed. They were news to Bruce at the time of their discovery, rough mixes done in contemplation of a concert album that was abandoned. It has its technical problems, but it was possible to clean up most of the sound to a fully professional modern standard, except for a couple of spots where extraneous noise does intrude, especially on the opening of disc two. But those are insignificant flaws in relation to the overall content of these tapes, which capture the band in fine form, especially Bruce, lead guitarist Mick Taylor, and keyboardist Carla Bley -- Ronnie Leahy fills out the keyboard sound and Bruce Gary handles the drumming. Their sound is surprisingly tight and their playing rich and crisp, doing a mix of progressive rock and blues-rock in which there are at least four potential lead instruments beyond Bruce's voice, which is extremely powerful throughout and, indeed, more expressive on-stage than it ever seemed amid the cacophony of Cream's concerts.

The repertory is drawn almost entirely from his solo catalog (though they do close with an extended version of "Sunshine of Your Love"), with a special emphasis on songs from Out of the Storm. Though Carla Bley gets a lot of the spotlight for her work on piano, organ, Mellotron, and various other keyboard instruments, Leahy gets an extended featured spot on the piano for the medley of "Tickets to Waterfalls"/"Weird of Hermiston"/"Post War." Although there are a few standard-length songs here, this was a band that mostly preferred to stretch out, a fact illustrated by the presence of only four numbers on the second CD, which runs the better part of an hour. What made it work was that they had enough to say to fill that length, even on the 23-minute "Smiles and Grins," and the otherwise familiar "Sunshine of Your Love," here flexed out to over 13 minutes. They switch gears effortlessly between vocal numbers like "One" and instrumental-driven jams such as "You Burned the Tables on Me," without skipping a beat or letting the listener go.

It's difficult to imagine how RSO would have released this recording reasonably intact in its own time -- there are too many tracks here that would have taken up a full side of an LP, and while Leon Russell and a few others had made the triple-live album a reality in rock, one is hard-put to imagine RSO springing for that with Bruce, whose critical notices were fantastic but whose sales -- especially in England -- had never matched his reviews. So perhaps it's just as well that this recording was forgotten but not lost, to show up today.

The mix of blues, jazz elements, and hard rock, all in a free-form jam format, now seems all the more bracing and the CD market allows it to be kept intact. It's also doubly fortunate that this show was recorded during the period in which technology had finally mastered the art of capturing the sound of various electronic keyboard devices on-stage intact -- it's a small matter, but fans of the Mellotron will probably love this release.
by Bruce Eder 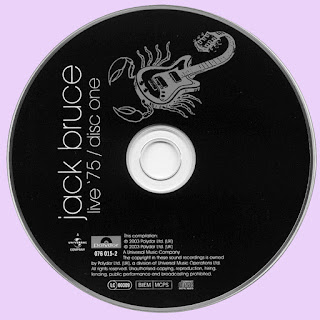 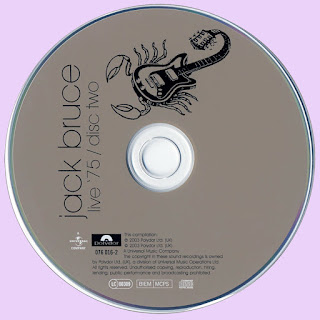