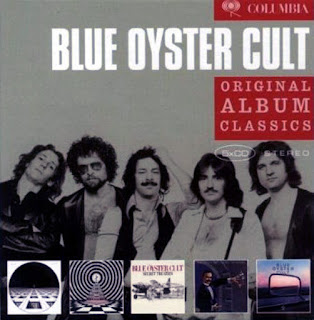 Blue Öyster Cult was the thinking man's heavy metal group. Put together on a college campus by a couple of rock critics, it maintained a close relationship with a series of literary figures (often in the fields of science fiction and horror), including Eric Von Lustbader, Patti Smith, Michael Moorcock, and Stephen King, while turning out some of the more listenable metal music of the early and mid-'70s. The band that became Blue Öyster Cult was organized in 1967 at Stony Brook College on Long Island by students (and later rock critics) Sandy Pearlman and Richard Meltzer as Soft White Underbelly and consisted of Andy Winters (bass), Donald "Buck Dharma" Roeser (guitar), John Wiesenthal -- quickly replaced by Allen Lanier -- (keyboards), and Albert Bouchard (drums), with Pearlman managing and Pearlman and Meltzer writing songs. Initially without a lead singer, they added Les Bronstein on vocals. This quintet signed to Elektra Records and recorded an album that was never released. They then dropped Bronstein and replaced him with their road manager, Eric Bloom, as the band's name was changed to Oaxaca. A second Elektra album also went unreleased, though a single was issued under the name the Stalk-Forrest Group.

Cut loose by Elektra, they changed their name again, to Blue Öyster Cult, and signed to Columbia Records in late 1971, by which time Winters had been replaced by Albert Bouchard's brother Joe. Blue Öyster Cult, their debut album, was released in January 1972 and made the lower reaches of the charts. Columbia sent a promotional EP, Live Bootleg, to radio stations in October, and followed with BÖC's second album, Tyranny & Mutation, in February 1973. Their third album, Secret Treaties, was released in April 1974 and became their first to break into the Top 100 bestsellers. (It eventually went gold.)

In May 1976 came their fourth studio album, Agents of Fortune, including the Top 40 (Top Ten on some charts) hit single "(Don't Fear) The Reaper" (featured in the classic John Carpenter horror film Halloween), which became their first gold and then platinum album. (On Your Feet went gold shortly after.)
by William Ruhlmann

One area of clear improvement is in the matter of lyrics; for the first time there is less emphasis on absurd, crypto-intellectual rambling and more of a coherent attack on a variety of subjects.  The former had simply become tiresome; the latter opens up whole new areas for Cult investigation.

"This Ain't the Summer of Love," for example, is a fresh approach to a subject one would expect to have been exhausted long ago. The Cult is still loud ("Tattoo Vampire"), still mordant ("[Don't Fear] The Reaper"), still obsessed with their peculiar brand of beery mysticism ("E.T.I. [Extra Terrestrial Intelligence]"). But by dropping the S&M angle and by inserting slivers of genuine rock & roll like "True Confessions," their best song ever, the Cult is easing into maturity with integrity.

Agents of Fortune's comparativeness slickness even serves to enhance their dark image: the ominous villiany conveyed by Buck Dharma's agile guitar lines on "Tenderloin" is far more effective than his heretofore standard thudding meanness. Blue Oyster Cult has built its career on a series of brutal non sequitors. nitially, these took the form of a group image of fascist hoodiness and "ugly" music detailed by AWOL rock critics' wordplay. This time, it is Patti Smith's presence, as co-writer of "Debbie Denise" and "The Revenge of Vera Gemini, " that provides the Cult with the aleatory motivation to seek success in the burgeoning commercial punk rock sweepstakes.

Another central influence is Allen Lanier's increasing importance, here evidenced by his authorship of "True Confessions" and "Morning Final," and ambitious bomb. In fact, former major-domos Sandy Pearlman and Murray Krugman seem to be barely keeping the boys in line, let alone under their aesthetic thumbs. Or maybe that's just what they want us to think, since, with David Lewis, they are credited with producing the record. In any event, it works: Agents of Fortune is a very pleasant surprise, its first side containing some of the best rock released thus far this year.
by Ken Tucker, Rolling Stone, 7-15-76 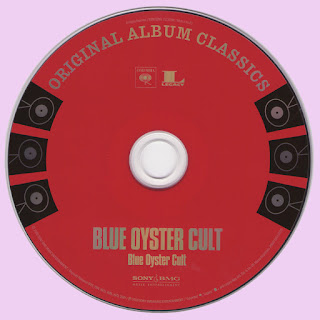 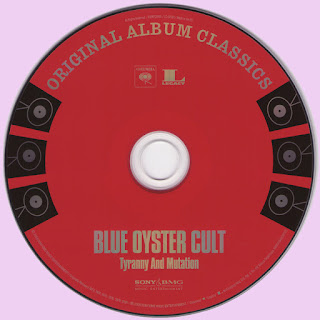 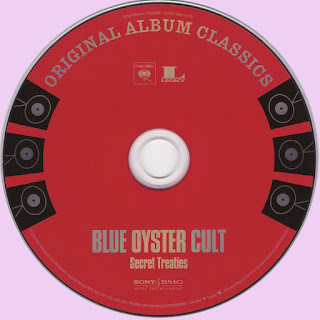 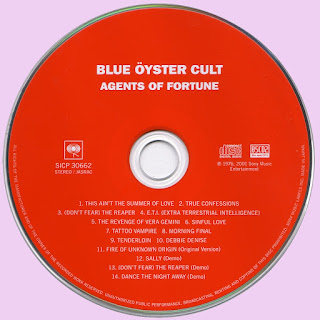 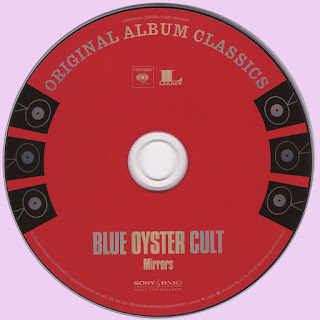