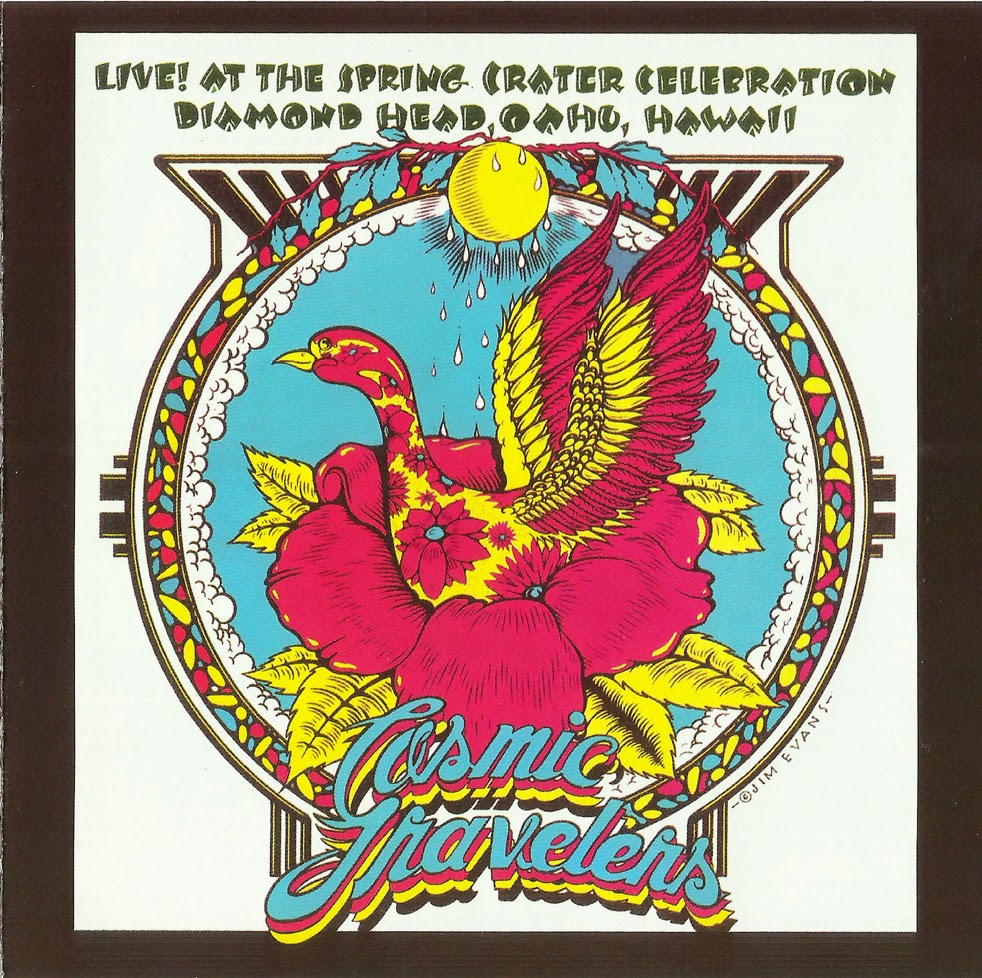 "We are travelers on a cosmic journey, Stardust, swirling and dancing in the eddies and whirlpools of infinity. Life is eternal We have stopped for a moment to encounter each other, to meet, to love, to share. This is a precious moment. It is a little parenthesis in eternity." Paulo Coetho, The Alchemist The Cosmic Travelers is a rare, original live album with 1,000 copies released on the Volcano label. This live jam was recorded at the Spring Crater Celebration in the Diamond Head Volcano in Oahu, Hawaii on April 1, 1972. The event was organized by businessmen and friends Tom Moffat, Ken Rosene and Herb Brentlinger.

The artists were a Los Angeles based combo of psychedelic blues studio musicians; Jimmy McGhee, Dale "Mule" Loyola, Joel Christie and Drake Levin. Jimmy had backed up Gene Redding and Etta James. Dale had recorded with the band Hook, and Joel and Drake had recorded with Lee Michaels. Prior to this. Drake had been the lead guitarist for Paul Revere and the Raiders, from their early dance hall days in the Pacific Northwest, to their national success with Dick Clark's Where The Action Is, and he had played on most of their biggest hit records. After leaving the Raiders, Drake had also been a member of the group The Brotherhood, which featured two of his Raider band mates, Phillip Volk and Michael "Smitty" Smith.

This festival in Hawaii was the first time that these four musicians had played together as a group, and they took the main stage and were recorded for this album after only two days of rehearsals. The rocking, hard driven guitar riffs from Jimmy and Drake were mesmerizing, and the vocals from Joel, Jimmy and Dale were a near-perfect harmony. The Cosmic Travelers was a good description of these four souls. They were musicians traveling to the Sunshine Festival, and the name seemed quite fitting since they were all indeed spiritual men.

The live Crater Festival album was recorded the same year that Drake and I met. It was later that year, the day before Thanksgiving, and when I met him he had this album in his hand. Both of our lives were forever changed and forever tied together from that point on. The next few months after we met were holidays spent traveling to Miami and Hermosa Beach. Drake and I went on to make beautiful music together as husband and wife until he passed away on the Fourth of July in 2009.

If you knew Drake, then you know that he was always a  leader, the idea maker and vision seeker, the music man. Drake was born in Chicago and moved to Idaho with his family when he was young. Although his years in Chicago were few, rhythm and blues seemed to be as much a part of him as others who spent their whole lives making music in that city. Drake joined the Raiders at 16 years old, and by the time that he had barely turned 18, he had already recorded a live set of music with the group, featuring covers of many R’n’B standards, and some original music. His talent was obvious in his guitar solos and steady rhythm. In later years, besides playing with Lee Michaels. Drake also played with Emmit Rhodes and Ananda Shankar, and produced other artists as well.

As Drake and I got to know each other, I got to know his friends in the Cosmic Travelers also. Drake had described Jimmy McGhee as a soul brother from Los Angeles. He and Jimmy had toured in Canada and the mid-west with Gene Redding and Etta James. Jimmy moved in with us while the guys prepared to go back to Hawaii and cut another album. He lived with us in Los Angeles for the next couple of years. Something that was so impressive to me was that he played his guitar all the time! He seemed to live and breathe music; if he was awake he was playing. He was so incredibly jazzy and funky! No matter who came to the house, Jimmy would have them playing some instrument or singing.

The fabulous and solid Peruvian drummer, Dale Loyola, had just come off the road with Lee Michaels. Dale also moved in with us, and along with Drake and Jimmy formed the new group. The Travelers. They toured the west coast from Santa Barbara to San Diego for the next 5 years. The soulful and amazingly talented lead singer and bass player, Joel Christie, had his own group happening in Los Angeles. Joel was writing very heavily back then. He sang lead in the musical Jesus Christ Superstar, and wrote spiritual and new age beginnings material. Eventually Joel came to live with us as well, after the other guys had moved out, and he played gigs with Drake in Tahoe with Curtis Lawson and Billy Dunn.

This gig in Hawaii brought these gentlemen together as musicians and life long friends, and as you listen to this album, you are listening to some of their best work. This was but a brief moment in eternity, but a very rare and special moment!
by Sandra Levin, San Francisco, California October, 2012 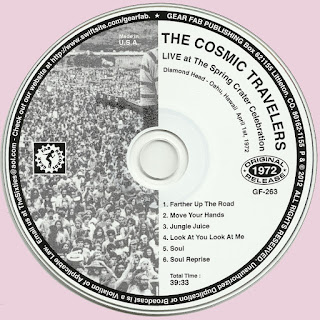 Free Text
Just Paste
Posted by Marios at 7:32 AM 10 comments: