Crabby Appleton - Rotten To The Core (1971 us, exceptional classic rock) 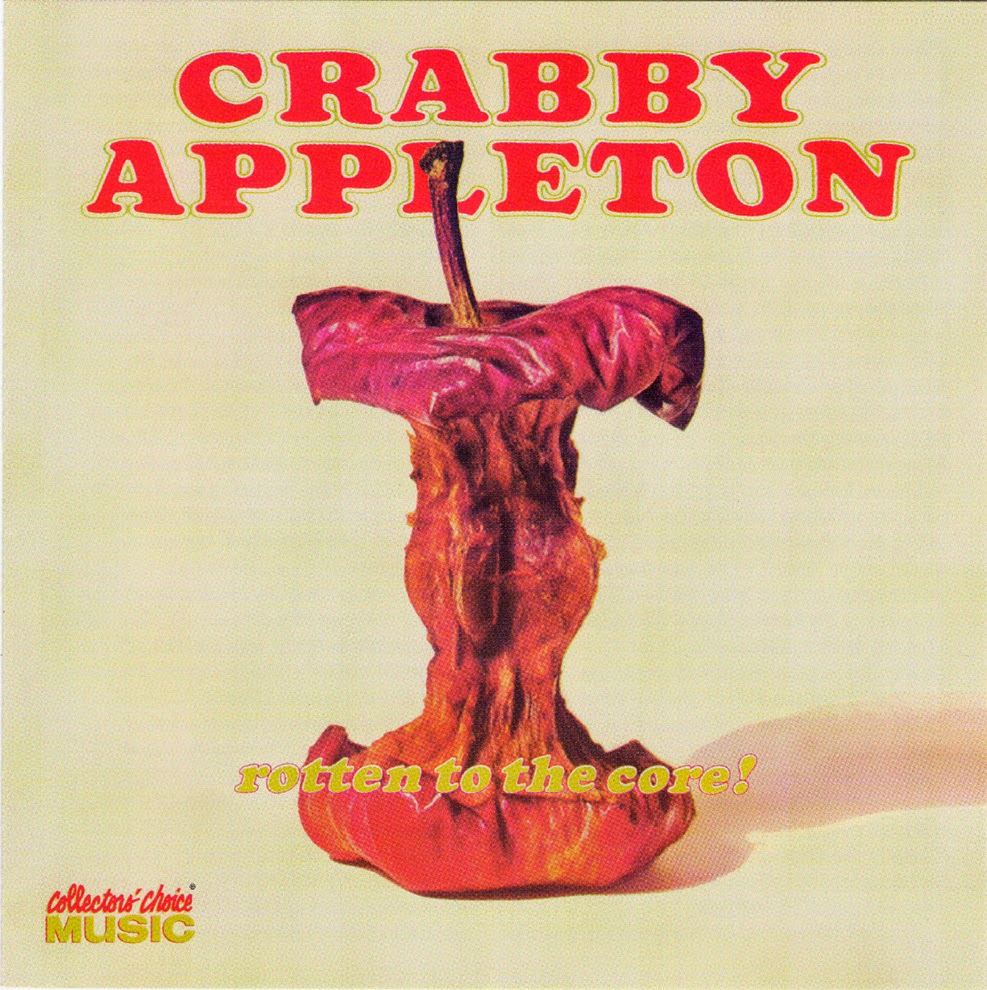 Crabby Appleton's first album, Crabby Appleton, had established them as one of the more promising new American bands at the dawn of the 1970s. It had yielded a Top Forty single, "Go Back," and unveiled a diverse group that combined both pop-rock smarts and artier inclinations.

Lester Bangs gave the album an enthusiastic thumbs-up in Rolling Stone, and (with Andrea di Guglielmo) co-authored a lengthy profile of the band in Creem. When they opened for the Doors at the San Diego International Sports Arena Center on August 22, 1970, according to the band's principal singer-songwriter Michael Fennelly, "Go Back" stood at #3 on the local charts -- one of several on which the single soared higher than its comparatively modest #36 peak in Billboard.

Crabby Appleton would not rise any higher, commercially speaking, between the summer of 1970 and its dissolution shortly afterward. The follow-up non-LP single "Grab On," remembered by Fennelly as "probably the best thing we ever put down on tape, one of the few hard rock things that Crabby Appleton did that I can listen to and not cringe," had flopped.

There would be an opportunity, at least, to do a second album, Rotten to the Core. If Crabby Appleton had initially, as Bangs and di Guglielmo wrote in Creem, sounded "like a cross between the Everly Brothers and the Rascals, with tasty hints of off-shoots like the Troggs, and occasional interludes of soft, wistful bossa nova for balance," Rotten to the Core took the band into a decidedly harder-rocking direction, with far stronger rootsy blues and country influences.

"Most of the material for the second record was written within Crabby Appleton, whereas for the first, most of the material was crafted before that band," explains Fennelly. "I was writing for Crabby Appleton, rather than taking songs, introducing them already written, and trying to craft them to something that would work with the band. 'Smokin' in the Mornin',' the reason for that song is that the band said, 'We need a shuffle. Write a shuffle.'"

Boogie and bluesy hard rock came to the fore on both that track and others such as "You Make Me Hot" and "Lucy," sometimes garnished by accomplished blues slide guitar. Such outings were a reflection of the band's live sound. "We were playing a lot of outdoor gigs, a lot of arena gigs, and had developed into a band that could play 40 minutes of big crowd-pleasing stuff," elaborates Fennelly. "We wanted to be able to do that in a studio, or at least capture some of the impact and power of that. One of my regrets is that there were times where we really were a kick-ass band, but we never kicked ass in the studio."

With that in mind, the band, after parting ways with the producer of their debut LP (Don Gallucci), had hoped to hook up with a rock'n'roll producer who could capture that energy. In fact Michael thinks they approached Glyn Johns, "and I think he said something insulting about our music, and that was the end of that." Instead they ended up with Bob Zachary, who was more grounded in the folk-based sound for which Elektra was known, producing Paul Siebel's Jack-Knife Gypsy album around the same time. "Bob was sort of the opposite direction in which we needed to go at the time, production-wise," feels Fennelly. "He really didn't have much experience with any sort of loud or distorted sounds."

But, Michael adds, "where the country or folk stuff surfaced on the second album, I think it was realized pretty well." Byron Berline was brought in to play fiddle on "One More Time," a country-tonk hoe-down with slide guitar; David Grisman contributed mandolin to the uncharacteristic light Gram Parsons-like country-rock of "Paper to Write On." "One More Time," oddly, was covered for a small country hit by Jo Anna Neel, better known for "Daddy Was a Preacher, But Mama Was a Go-Go Girl."

The tastiest detour from Crabby Appleton's prior sound was "Make No Difference," with its effective combination of organ, slide blues guitar, and superb gospel-soul backup vocals from a trio of session singers, including Clydie King (best known for her work with Bob Dylan in the early 1980s). "We probably felt a little bit freer to stretch out in the second album," acknowledges Fennelly. "I really was determined to not be pigeonholed, as far as what sort of constraints we put on what kind of music we could make."

For all its eclecticism, some of the album's strongest tracks were "Tomorrow's a New Day" and "Love Can Change Everything," the ones most reminiscent of the buoyant pop optimism that had colored much of the group's debut album. As it turns out those were the oldest Fennelly compositions on Rotten to the Core, "Love Can Change Everything" having been written back in the late 1960s when he was with the Millennium, and "Tomorrow's a New Day" shortly after his stint with that group.

"Those were a couple that were sort of waiting in the wings, and that we pulled out to include on album two," says Michael. "I like the ballads today, because I think they stand the test of time a little bit better than the hard stuff. We were a little disappointed that the harder material on our albums didn't come across as effectively recording as they would live. The ballads [and] country, folkier stuff really is less affected by the passage of time, and the softer stuff on the second Crabby Appleton record is much more pleasing for me to listen to now."

Even in relation to the relatively modest performance of Crabby Appleton, Rotten to the Core's sales were disappointing. (Incidentally, a couple of mock one-liner joke songs in the country style of "Paper to Write On" that would have served as link tracks were excised at the last minute, though they somehow managed to sneak onto the eight-track version.) "I'm not sure there was an awful lot on that record that was marketable," Fennelly admits. "It was a little self-indulgent, and didn't have a 'Go Back' that leaped right off the tracks."

Drummer Phil Jones left the band in the middle of a tour shortly after the second album, and though a replacement drummer enabled them to finish it, Crabby Appleton disbanded soon afterward. Michael Fennelly would continue to make music as a solo act, flying to London with Crabby Appleton organist Casey Foutz to record his debut album, produced by ex-Zombie Chris White.
by Richie Unterberger 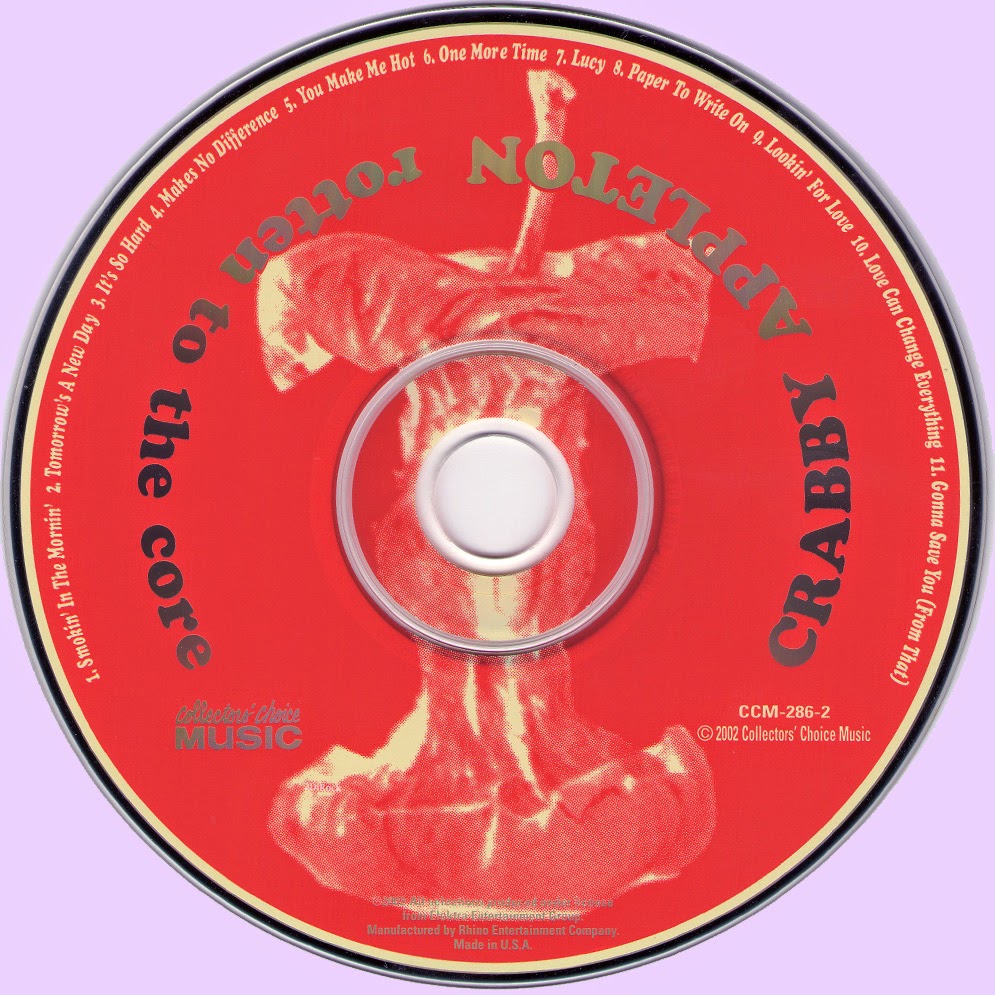 Free Text
Text Host
Posted by Marios at 8:30 AM 9 comments: